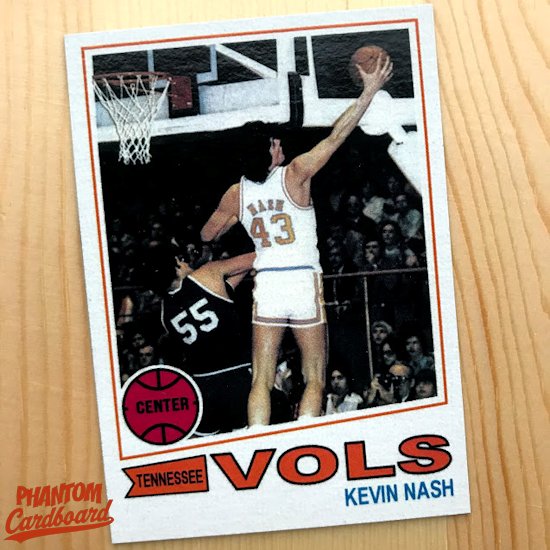 Here's one I've been sitting on for a little bit.  I came across the picture in an unrelated image search, which seems to be a pretty standard way for me to get inspiration for new custom trading cards.

Kevin Nash is a name that is recognizable to even the most casual of wrestling fan with him being part of some of the biggest story lines in the 1990's when professional wrestling was white hot.  Nash went through a number of gimmicks in the the two biggest promotions: Steel, Oz, Vinny Vegas, and Diesel. Then he found his greatest success as big bastard named Kevin Nash who was one half of "The Outsiders" that invaded the WCW, and later a founding member of the NWO stable.

What may not be so well known is that Nash played "Super Shredder" in 1991's Teenage Mutant Ninja II: The Secret of the Ooze.  What may be even less well known is that "Big Sexy" played division-one college basketball.  The 6'10" Motor City native played center for the Tennessee Volunteers from the 1977-78 season through 1980.  Due to a physical altercation with the Vols head coach there wasn't a senior season for Big Kev.  From there he went over to play ball in Europe where an ACL injury ended his hoops odyssey.  A couple various careers later he would try his hand at pro wrestling and the rest is history, as they say.

This card was inspired by the 1977-78 Topps basketball card set.  I got really all the elements down with the exception of how the text ramps upwards on top.  Not exactly sure how that is achieved.  I tried a couple of different things that just didn't look clean enough for me.  I would have liked to make it more exact, but I don't feel like the level text doesn't take too much away from the over all optics.

**A very special thanks to Kristian from kcdesignz for helping me clean up the Nash photo a bit.
Posted by phantomcardboard at 2:13 PM No comments: 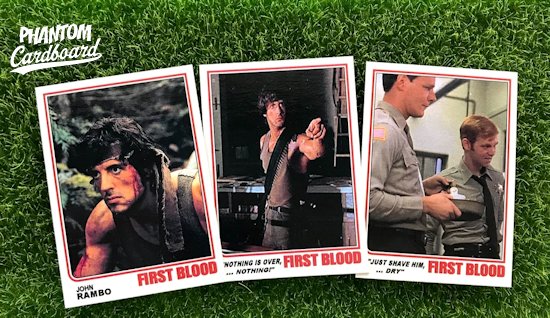 I'm a Stallone guy.  I've always loved anything he's in.  I just think the guy is super charismatic and a greater actor than maybe he's given credit for.  My favorite Sly flick of them all is easily First Blood. 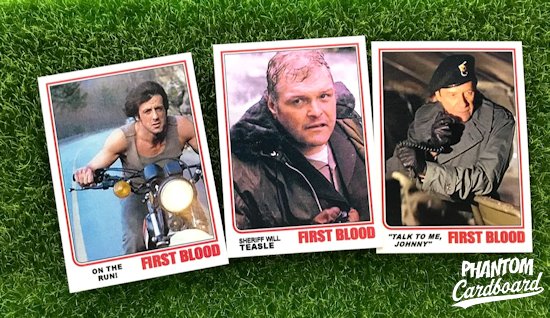 Last month First Blood turned 35 years old having been released in theaters in 1982.  I got it in my mind that since First Blood is a top-five movie for me and official card set doesn't exist I should make one.  (Topps did however put out a 66 card set three years later when First Blood Part II was released, a card I've parodied a few times.)

I chose to modify the "In Action" subset from the 1982 Topps football set for my First Blood cards.

When making a set of cards I'm really only limited by the number of quality images I can find off of line.  This set goes nine cards.  There's a few other scenes I would have loved to have cards of if images would have been available, but I feel like I got some of the more memorable parts of the movie on cardboard. 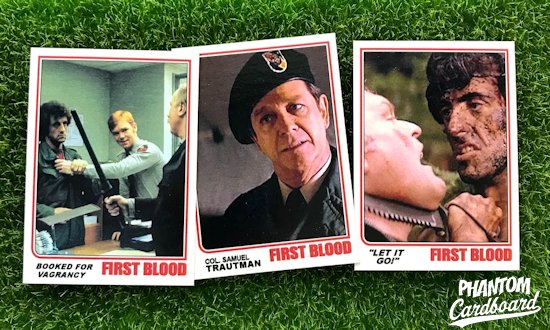 Posted by phantomcardboard at 7:12 PM 3 comments: