My card making production is a far cry from what it was during the Covid era of 2020-21.  Being back to in-person work has had a negative effect on my pace, but I still find time here and there to have some rectangular creative cardboard fun.

In this time I've fielded a number of inquiries about the Dream Girl series I'd been cultivating.  I guess I'm to assume it has a little bit of a following.  I can see the appeal.  Beautiful woman X a very memorable early '90s baseball card subset.  It's got the freshest ingredients.

So, since it's been a hot minute I've decided to add not one, but THREE new additions to this ongoing set.  Halle Berry, Brooklyn Deck and Charlotte McKinney.  The latter two are carry overs of a boxing themed TKO! series I  had started that was kind of a predecessor to the Dream Girl set, and the Halle was a cutting room floor commission.

Posted by phantomcardboard at 7:44 AM No comments:

This past Sunday I took in the Astronomicon to get a few of my custom cards signed.  This was the 5th annual version of this particular convention, but my first one.  I just recently found out about it and was pretty impressed with the lineup, so I decided to check it out seeing as I have custom cards of a few of the celebrity guests that I wanted to add to my autograph collection.

First off, I thought the convention was well laid out and well organized.  I guess I expected a smaller scale than what I encountered.  It was first class all the way.

The three signers I keyed in on were Nick Castle from Halloween, Peter Dante from The Waterboy and Kevin Nash.  If you're new to my cards or this blog, this is where my genesis for making custom cards really came from, to be able to create cards of things that didn't exist that I wanted signed cards of - in a nutshell.

So, I took to the convention armed with special edition versions of the above three cards. 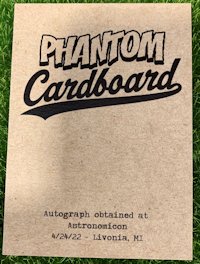 No complaints about the signers.  My interactions are typically brief because I really don't know what to say to these people.  I'm truly awkward and introverted, in a textbook sense and not in a 'I'm just so introverted' trendy meme sense.  I assume they know I'm a big fan since I'm waiting in a line in order to pay them money to write their name on something for me.  I get the autograph and get the hell out of there.  I leave the the schmoozing for the people in line behind me who actually understand how small talk works.

The only time I break from my signer protocol is if I'm asked about my cards.  Typically the signers really dig them.  I usually get a "I've never seen one of these, where did you get it?" type of responses, and that gives me an in where I don't have to feel like a weird tongue-tied fanboy.  Unfortunately that didn't happen this go 'round.  The only pop I got was from MI native Kevin Nash.  "Big Daddy Cool" remarked "whoa, blast from the past" when presented with my custom college basketball card of him.

I got a photo signed by Danielle Harris for my buddy that was under the weather and couldn't come with.  I've gotten her auto before via private send-in, I just mention this as a lead-in to an observation.  This was the first time I ever saw Danielle Harris in person and she's is definitely a small breed.  I'm thinking if I had brought a backpack I could've snuck her out in it.  Other than that she was very sweet to me and everyone else I saw her interact with.

Then there was Peter Dante...  Even though he didn't mark out to my Gee Grenouille card, the dude was definitely in the zone.  He had earlier purchased quite a few boxes of girl scout cookies from the scouts that had gotten a vendor table right across from where he was signing.  He was then passing them out to any and all in the vicinity.  He offered me a samoa cookie and my first inclination was to go with the "nah, I'm good" but then I thought this *is* El PresiDante giving me a cookie, plus he wasn't really wasn't taking no for an answer anyways.  I handed him the card to sign.  He got through "Pete" before stopping and legitimately trying to get to know me as a person.  Where I'm from, what I do for a living; the whole nine.  I gave him the info he wanted and we chatted for a moment about me and my state of professional affairs.  He then went ahead and added "Dante #12" and I thanked him.  But, even as I was walking away he continued to call out to me by name and hype me up like we were old buddies.  If the convention was a party, Peter Dante was easily the life of it.  I'll 100% get an autograph at all future conventions I attend that he's signing at.

Posted by phantomcardboard at 12:14 PM No comments: 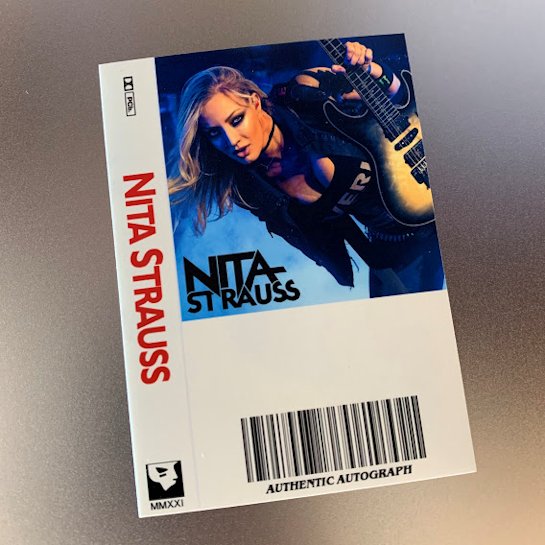 I sent this custom autograph card to VShout (whom I've gone through many times with great results, check them out) back in April of 2021 in anticipation of an autograph from a private signing that had scheduled with Nita Strauss.

If you're unfamiliar with Nita, she's a guitar playing force of nature.  She's got a lot on her rock 'n' resume, but is probably best known for touring with Alice Cooper and absolutely killin' it.

I had the idea to make an autograph card that looked like an old cassette tape sleeve.  I felt like that would make for a really rad autograph card concept.  I even went as far to make a barcode, that when scanned, would read "Phantom Cardboard" - although, thinking about it now the autograph would have most likely obscured that.

This was taking forever, but I was REALLY excited about getting this card auto'd, so I was willing to be patient and wait.  Well, after a year of waiting I got the unfortunate news that Nita -probably due to a scheduling/touring conflict- had to cancel the private signing.  Needless to say I was pretty bummed out.  But, I got the card back and will hold onto it in hopes of another shot.

Posted by phantomcardboard at 9:30 AM No comments: 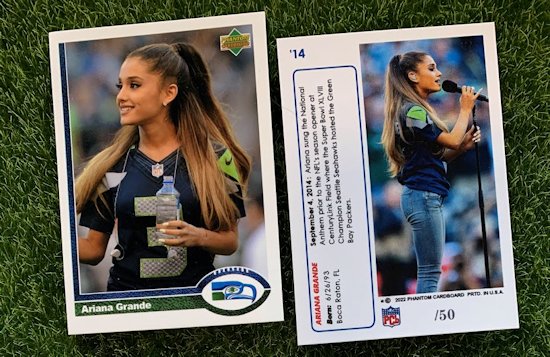 I recently came across a picture of Ariana Grande in a Seattle Seahawks Russell Wilson jersey from 2014 when she sung the National Anthem for the NFL's season opener and I thought it would make for a good card.

A few years back I was making a bunch of fantasy sports cards of celebs. in team gear throwing out ceremonial first pitches before baseball games.  This card pretty much fits that mold.

This card is done in the style of the 1991 Upper Deck football base card.