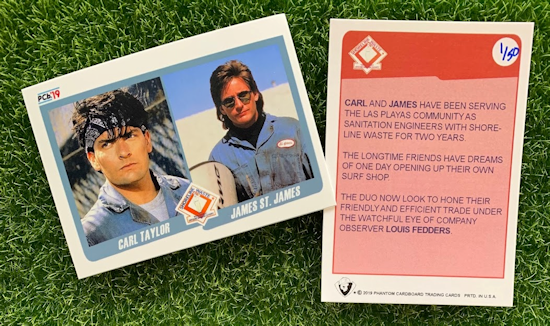 I may have mentioned it in another post, but back in the early '90s we used to watch a lot of HBO, especially in the dog days of summer when there wasn't much else to do.  Any time I see that old "HBO Feature Presentation" intro floods me with nostalgia of watching the premier of a anticipated new movie with my family.

Men At Work was a movie I watched a ton of time.  My mom like it so much I remember she dubbed it on VHS.  It's one of the movies that I could probably go line-by-line for most of its scenes.  Charlie Sheen and Emilio Estevez had great chemistry, and why shouldn't they, right?  They're brothers after all.  They should have done more movies together, in my opinion.  Keith David also killed it in this movie.

For this card I wanted a way to feature both Carl and James on the same card.  That drew me to the 1990 Fleer baseball "Major League Prospects" subset.  I remember being really geeked when I pulled the George Canale / Kevin Maas  Prospects card.  With all the hype surrounding Maas I was sure that car would one day be worth roughly a zillion dollars.  Yea, no. 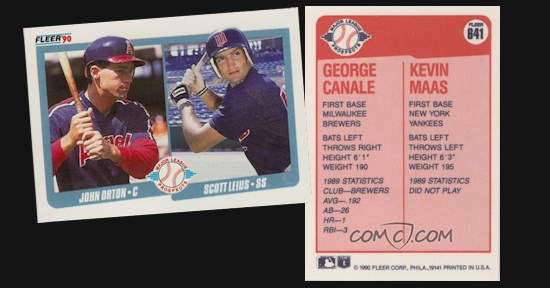 Posted by phantomcardboard at 11:15 AM No comments: 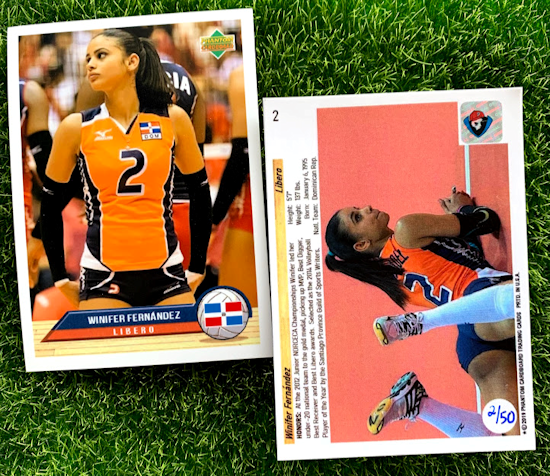 Encouraged by how my Allison Stokke card turned out I was eager to try another Upper Deck inspired design.

Winifer Fernández basically became the Allison Stokke of women's volleyball in 2016 when images and video of her went viral because she's really, reallly attractive.  But, just like Stokke she is way more than just a pretty face, but rather a very accomplished athlete at her own respective sport, and like Allison Stokke that was pretty much overlooked on account of her being smoking hot.  So, like I did with Allison Stokke I made a custom card that highlights both Winifer's beauty and her athletic brilliance.

I wouldn't have minded again using the 1989 Upper Deck baseball design for this card but I didn't think it lent itself as well to volleyball.  So, I went looking for a basketball design since both sports are played indoors on a gym floor.

I landed on the 1992-93 Upper Deck McDonald's basketball.  I remember being really excited about theses cards when they came out.  I don't have stats and figures but I want to say around this time basketball cards were taking the hobby spotlight from baseball.  This was due to it being Shaq's rookie year and there was never anyone quite like him before, a true phenomenon.  You also had hobby favorite Michael Jordan and his Chicago Bulls thoroughly dominating the league in the midst of their first three-peat run.

The 1992-93 Upper Deck McDonald's were a 50 card set only available at McDonald's restaurants.  I seem to recall with the purchase of a value meal you could also get a pack of these cards.  McDonald's did something similar with NBA Hoops the season prior. Cards came three to a pack in the familiar Upper Deck foil wrappers.  It was just star players bolstered by a solid rookie class that was headed by names like Shaquille O'Neal, Alonzo Mourning and Christian Laettner.

I was always a fan of oddball type issues.  I dunno, just something about them that's a bit more exotic I guess.  Cards used to come as cereal prizes, on snack boxes, as fast food premiums, retail store exclusive boxed sets, etc.  These were always favorites of mine because they were a little more difficult to come by, especially pre-internet.

Posted by phantomcardboard at 2:20 PM No comments: 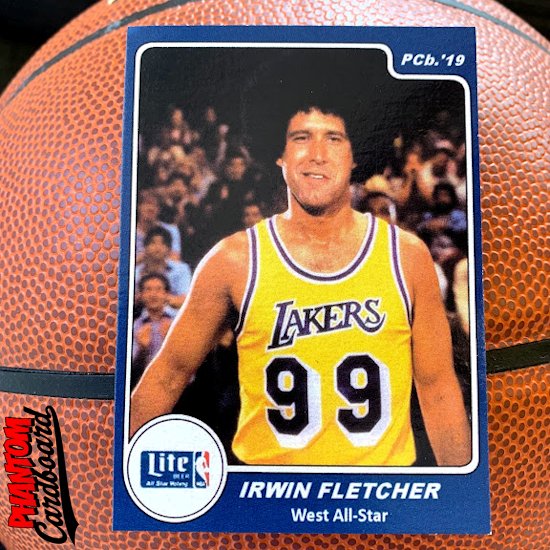 While sifting through my personal card collection I was reminded of Star's 1985 All-Star subset that was sponsored by Miller Lite (there's also a version that uses the same player photo just with a gold border and a Crunch 'n Munch logo).  I thought the Lite version would be awesome for a Fletch card.  Even though I've made a number of Fletch cards I went back for one more. 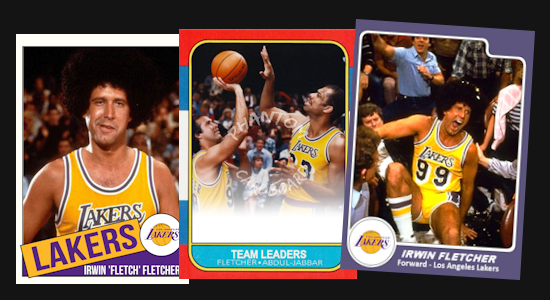 Not only did I think it would be a humorous addition because of the beer sponsor, but it also gave me a chance to do a custom card back. 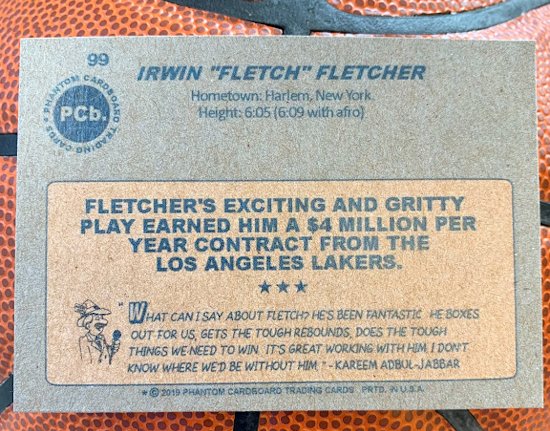 At this point I've just resigned myself to the fact that I'll never be done making custom Chevy Chase cards.
Posted by phantomcardboard at 10:51 AM No comments: 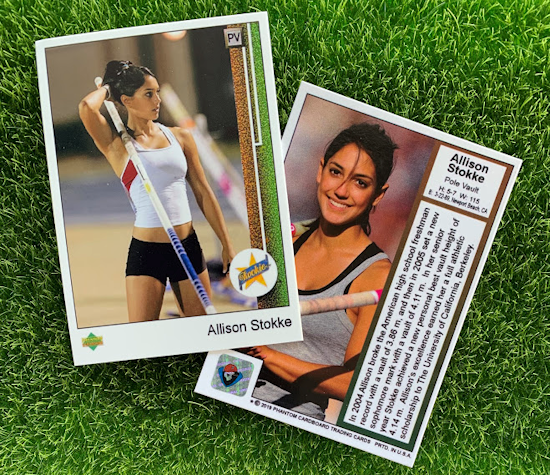 Remember Allison Stokke?  She's the California high school pole vaulter that became an overnight phenomenon thanks to a candid photo of her that went viral in 2007.  While a then 17 year old Stokke was simply waiting for her next vault a photograph was taken of her that made its way onto a popular sports blog and changed her life.  That photograph also sparked a lot of controversy over the sexualization of female athletes.

Anyone with a set of eyes, or even if ya just have one, can see why this image spread across the internet like a California wildfire.  There's no two ways around it, Allison Stokke is a beautiful girl.  But, looking at that same picture there's something equally as obvious, Allison Stokke is an athlete.  You don't get the muscle tone she has by sitting around texting.  Allison's athletic accomplishments were every bit her world class beauty's rival.  Stokke wasn't merely participating in track and field she was breaking national records on her way to earning a full ride to The University of California.

Unfortunately for her the years of dedication got overlooked because of well, her hotness, basically.

I wanted to make a card for her that gave that infamous photo somewhat of a redemption.  I wanted my card to recognize her athletic accomplishments while not pretending that she isn't  incredibly stunning.  There's no reason why she can't be both.

With the photo locked and loaded I needed to decide what kind of design to use.  The image is from 2007 and I couldn't pick out a 2007 trading card design from a 2017, so that was out of the question.  Gotta keep it vintage inspired, my friends.  I noticed Allison was born in 1989 and with I had a great excuse to finally use the ground breaking 1989 Upper Deck baseball inspired design.

Not only can the 1989 Upper Deck easily double as a track and field motif it is also home to maybe the most important baseball card of all-time ... the Ken Griffey, Jr. card no. 1 (although the '52 Mantle might have something to say about that).  The '89 Griffey  rookie really started the baseball card boom of the 1990s when it seemed like there was a card shop popping up on every corner.  The 1989 Upper Deck cards were white hot.  They added a premium look to baseball cards with the glossy white stock, high resolution photos and hologram technology.  I even recall a  small lawn mower shop by my house that would put out a sandwich board advertising that they had Upper Deck baseball cards.  A lawn mower shop for Pete's sake!  People spent obscene amounts of money trying to horde the Griffey RC as a future investment.  Unfortunately the bubble has long since burst due to there being no real scarcity of any card from the era, especially after the internet came along.

Since THE photo was how the world was introduced to Allison I threw the famous UD rookie logo on her card.  This card comes along at a good time being that I'm starting to do more with card backs.  This gave me a chance to highlight Allison's athletic prowess and also add another great smiling shot of her.  I also got a chance to use my hologram tamper sticker as part of the card's overall design in the same way Upper Deck made famous with there card's design.

Allison went on to have a solid vaulting career at UC Berkeley where she earned All-American honors in 2011.  Not only that but the also completed a masters degree in sociology from UC.  She continued to compete professionally after college while also getting into the world of sportswear modeling for likes of Nike and others.  Just this month Allison married professional golfer Ricky Fowler who she'd been dating since 2017.

Posted by phantomcardboard at 11:54 AM No comments: 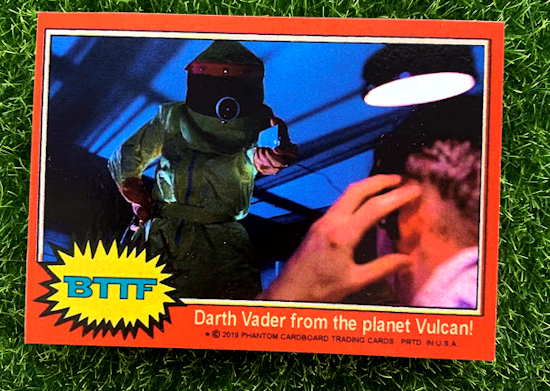 There's been a couple of times I've come up with a custom card idea that I can't believe I didn't think of earlier.  Add this card to that list.

Remember that scene in Back to the Future where Michael J. Fox appears to  Crispin Glover as Darth Vader the extraterrestrial from the planet Vulcan?  I went out on a limb thinking some Stars Wars fans may have also seen BTTF and could appreciate a good custom trading card mashup.
Posted by phantomcardboard at 9:21 AM No comments: 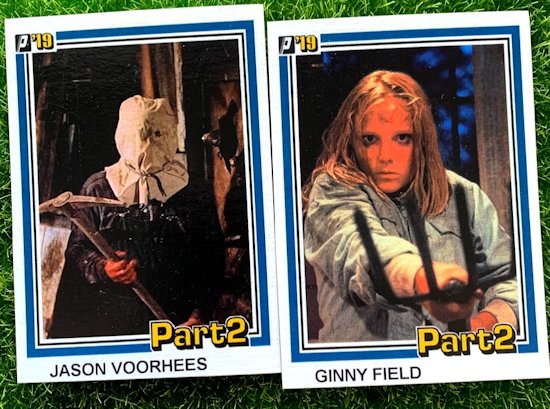 I wanted to get this set done in time to have it out last month when the 13th fell on a Friday, but I just couldn't get it in under the wire.  So, I held onto it figuring an October release would be the next best thing. 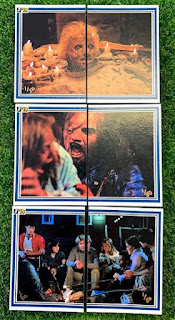 The inspiration the do a custom card mini-set from this movie was really so I could do a card of Kirsten Baker's "Terry" character.  I know everyone loves Amy Steel's "Ginny" and she is a phenomenal female lead, but for me it's all about Terry.  I have no shame.  She was tanned, toned and pretty much perfect.  But, if I was going to make a Terry card I might as well go ahead and get the whole Camp Packanack gang back together.

Other than that though I really do like this chapter of the Friday The 13th franchise.  I like that Jason has a little different aesthetic wearing a burlap sack as opposed to the trademark hockey mask.  I also like it because it's one of the only movies where he's killing actual campers, which is part of the Jason Voorhees shtick.  Jason technically only does that in this movie and again in Part VI.

To coincide with the year the movie was released I went with a 1981 Donruss inspired design.  This is only the second time I've used this charmingly vintage looking template; the first time coming with my Freaks an Geeks set.  I outfitted all of the cards with a blue border as a tie-in to Jason's blue flannel shirt.

I've been experimenting more with card back designs in the last few sets I've made.  For this set each card got it's own numbered back, each with different movie fun fact.

I've included a special addition to this set.  There's 3 two-card puzzles, and when you combine those 6 cards they make another puzzle on the back side. 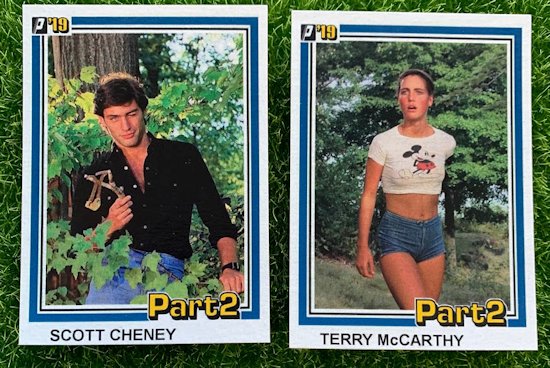 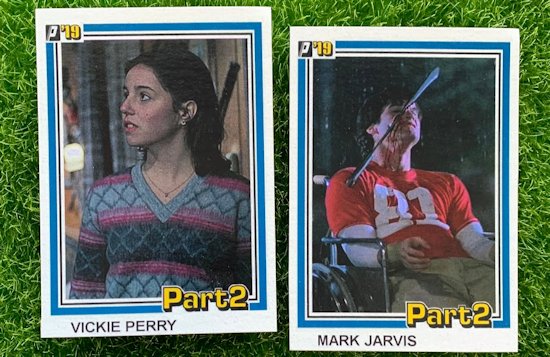 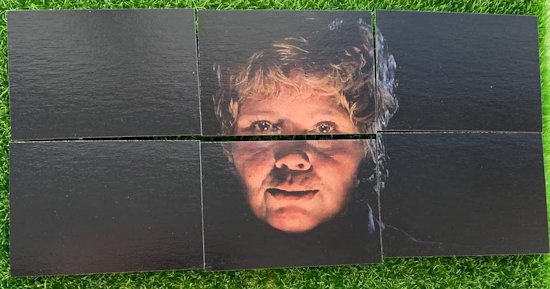 Posted by phantomcardboard at 11:01 AM No comments: