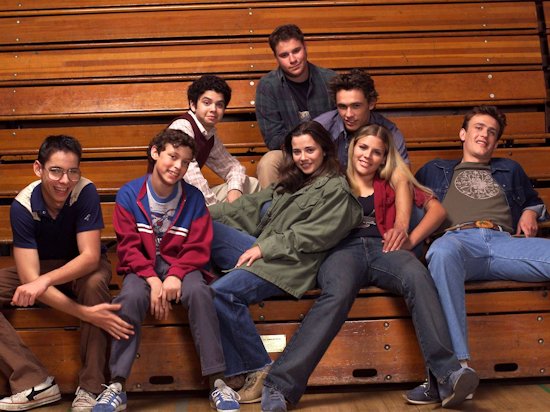 I’ve maintained that The White Shadow is my favorite show ever since discovering it on ESPN Classic in the early 2000s.  Then would come Freaks and Geeks.  Well, after a re-binge of the show on Netflix with my nine year old daughter I think it’s become a 1a / 1b situation between the two shows.

I've decided that if a person could watch the pilot episode of Freaks and Geeks and not be hooked then said person and myself probably don’t have much in common.  I like it that much.

I appreciate that Freaks and Geeks, set during the 1980-81 school year, feels authentic to the times.  There’s a show that I believe is pretty popular called The Goldbergs.  I tried watching it once and I just couldn’t get into it because in my estimation I was spoiled by Freaks and Geeks.  The Goldbergs is set in the '80s, but it doesn’t feel like it.  If anything it just seems like it aims to parody 80's clichés.  I believe I even caught a year continuity issue the one time I tried to watch The Goldbergs, although I don’t remember exactly what it was.  For someone like myself that revels in minutiae that is a deal breaker.  I’m not sure why I’m burying The Goldbergs other than it’s supposed to be set in the same era as Freaks and Geeks.

Freaks and Geeks, on the other hand, does nail the details -- and don’t think I wasn’t Googling different factoids that for most would be trivial and not stop them from enjoying the show.  Well, there was one Bill Laimbeer reference that didn’t really fit … but, besides that everything lined up.

As someone who hails from suburban Detroit I love that show is set in Michigan.  Freaks and Geeks is the brainchild of Michigan native Paul Feig.  Paul attended Chippewa Valley High School in Clinton Township - a suburb of Detroit.  That’s where the show’s fictional suburban city Chippewa, MI gets its name.  My only home state nitpick was that I don’t recall (unless I’m having amnesia) any snow scenes which you’re always going to get in the course of a school year in The Mitten State.

If you’ve ever read either of Paul’s memoirs “Kick Me” or “Superstud” you’ll recognize that many of the situations are adaptations of some of Paul’s hilarious adolescent experiences.  While reading those two books you’ll come to realize the Sam Weir character is probably based on Paul’s awkward youth.  I highly recommend reading both.  They’re two books that had me talking to myself while reading often saying something like “oh, nooo, no” and setting down the book to laugh.

Then there’s the cast.  What a collection of talent.  Freaks and Geeks was the springboard for megastars such as James Franco, Linda Cardellini and Seth Rogen.  Then there’s early guest roles for the likes of Joanna Garcia, Rashida Jones, Shia LeBeouf and Ben Foster.  Those are just the tip of the iceberg.  Seriously, go watch it if you never have, or rewatch it if it’s been a while.  The series seems to have a permanent home on Netflix. 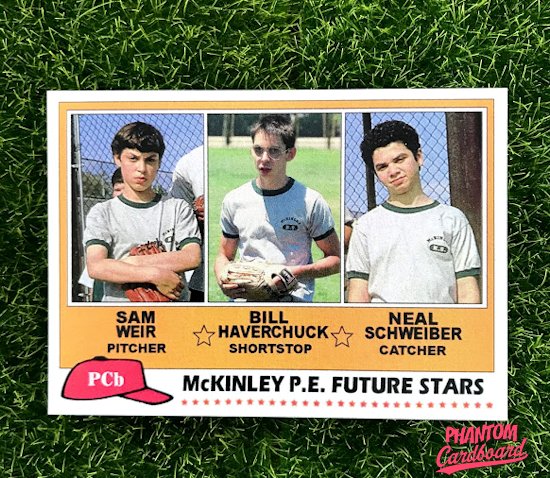 While watching the episode “The Diary” I was inspired to make a custom card of the geek's P.E. softball triumph.  At first I thought to do three individual card but then thought it’d be much cooler to throw Sam, Bill and Neal into a 1981 Topps baseball Future Stars inspired design. 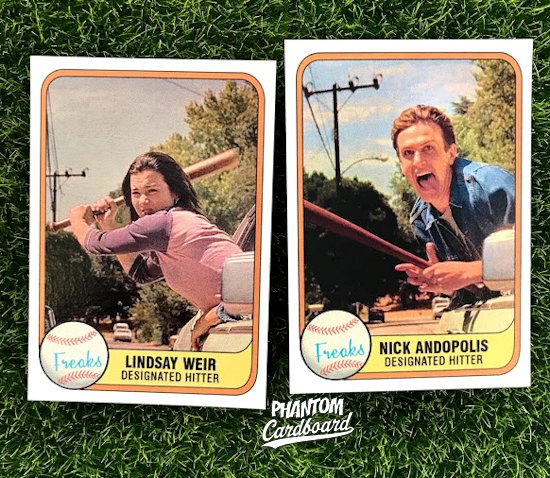 The next card I did was from the “Tricks and Treats” episode.  That particular episode is one of my favorites.  I did a Lindsay Weir card in the style of the 1981 Fleer baseball design.  This card is along the same lines as the cards I’ve done with the theme of characters using baseball bats for something other than playing baseball with Lindsay and the gang playing mailbox baseball during the episode.  Set on Halloween this would have taken place in 1980, but I still decided to use the 1981 Fleer baseball inspired design.  I already had the idea of making a Freaks and Geeks set that consisted of multiple sports card designs all from the same year.

After numerous legal battles over the years Fleer finally broke Topps’ stranglehold on the sports card market and in 1981 both Fleer and Donruss both rolled out their respective inaugural baseball card sets.  I’ve included that little piece of trading card history to explain how 1981 offered my set a couple more design options that were not available the previous year.  I later found a pic of Nick (Jason Segel) looking like a mad man getting his mailbox baseball at-bat.  Both the Lindsay and the Nick photos fit perfect with the 1981 Fleer design as they have a hazy look to them.  It seemed that the photos on the 1981 Fleer cards look like they were taken with a Polaroid camera or something.  I specifically remember as a kid picking up a 1981 Fleer Kirk Gibson at a garage sale and thinking the picture they used was so old looking.  With that being said I’ll point out that these two cards use the Detroit Tigers color scheme from that set for the Michigan connection.

After making the first two cards, the Lindsay and Geeks Future Stars cards, I decided to show them on Instagram hoping I’d find others to nerd out over Freaks and Geeks with me.  I tagged all four actors on the cards and to my swooning surprise not only did the show’s co-main star Linda Cardellini like it but she shared it on her own page and it got a like by Paul Feig!  The plan was already in place to add cards to make it a mini-set but that recognition put an extra turbo boost in my creative fire.

This set turned out to be my largest to date.  At 41 cards I’m wondering if it’s still okay to refer to it as a mini-set?  I wanted to make the set fun and comprehensive and I think I accomplished both of those goals.  I made cards of every character I wanted to get in the set.  There was a couple of fringe characters but the lack of good images in my searches sealed their cardless fates. 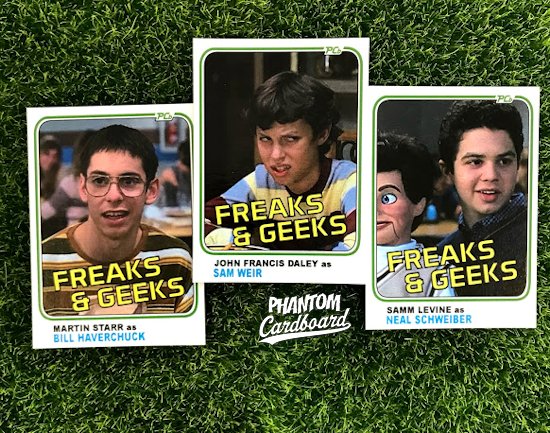 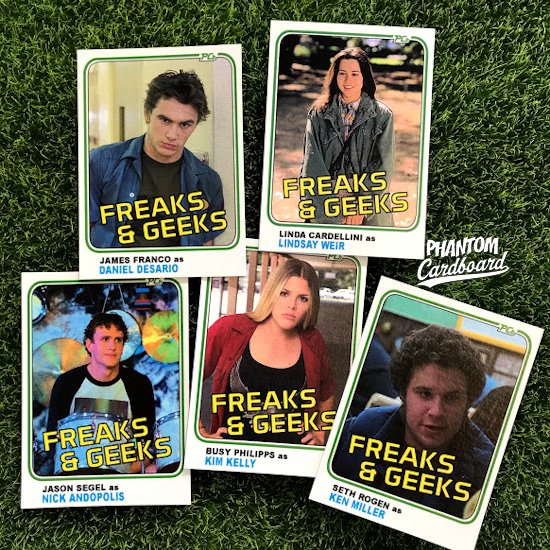 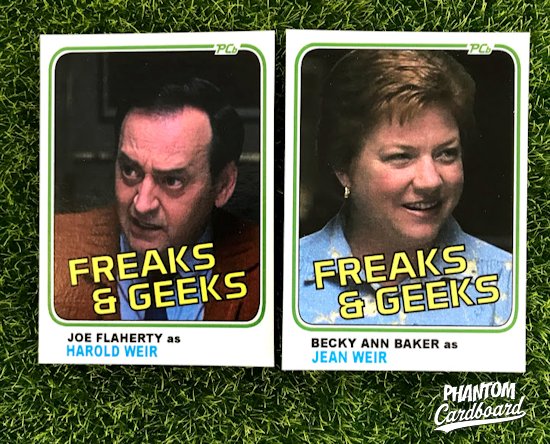 What I’ll refer to as the “base set” consists of character cards done in the style of the 1981 Topps hockey cards.  This was the only set I’d used previously.  Well, technically I’ve used the 1981 Topps baseball set for my Incredible Hulk cards but I still had to make the Future Stars card from scratch with the two cards in the Hulk set being modeled after the 1981 Topps baseball base card design. 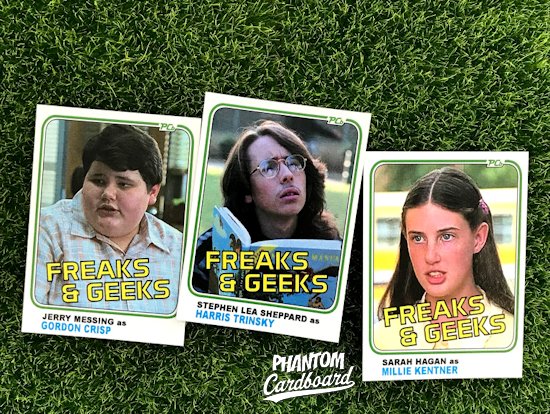 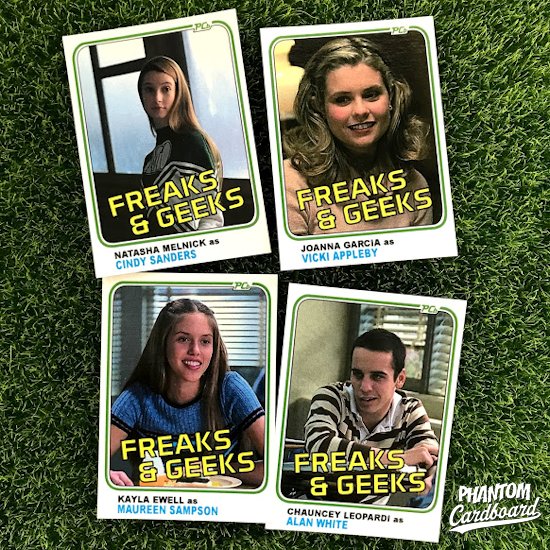 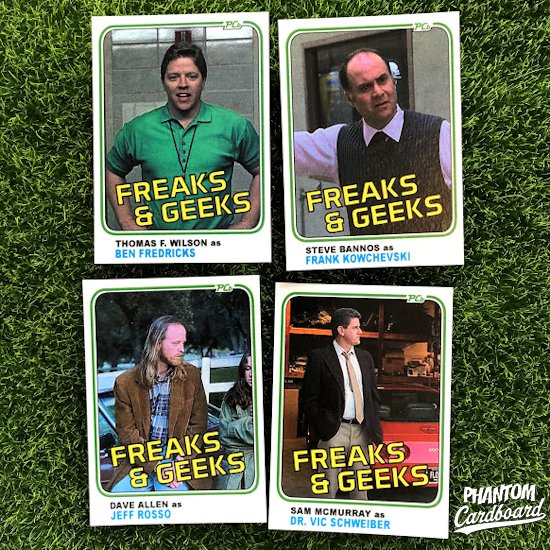 I framed the base cards in McKinley High Norseman Green and also added the actors name after deciding that just using the character name made it look like to me that there was something missing.  For these cards I also added a Phantom Cardboard logo much like the style of Topps’ branding on their 1981 hockey cards, just mine being a little smaller.  In the past I’ve been content to take credit by just stamping my text logo on the card’s back.  I started playing around with initials on the front of these cards.  I was still on the fence so I threw up a with / without picture poll on my Instagram story and ‘with’ won out by a 3-to-1 margin.  So going forward I will probably add a signature to the front of cards when applicable; granted it has to fit in with the original spirit of the design and not distract from the card overall. 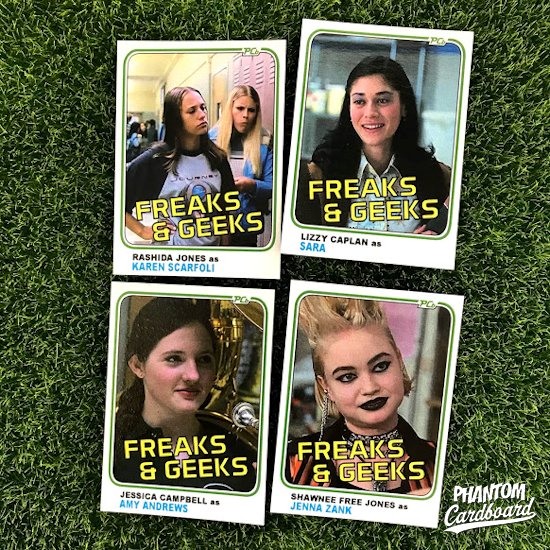 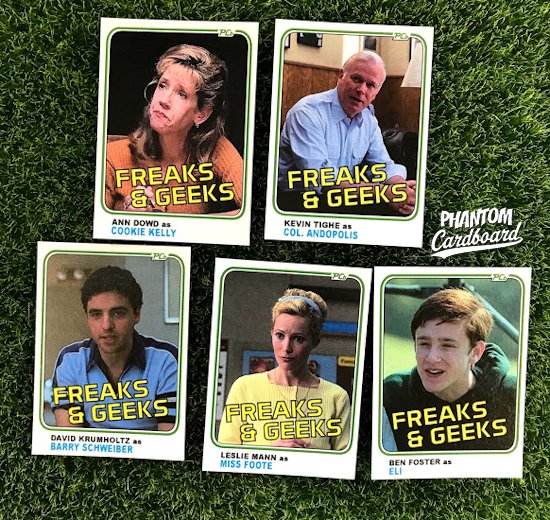 Next up is a design inspired by the 1981 Topps basketball set.  There’s an episode “We’ve Got Spirit”  where there’s a little basketball action.  I was looking forward to doing these cards just because I’m a basketball guy first and foremost.  I did cards of McKinley’s star player and Sam’s crush’s crush, Todd Schellinger.  Coach Fredricks gets a card too, you may also recognize him as Biff Tannen.  Tom Wilson is fantastic in Freaks and Geeks.  Then my favorite of the three, a Norseman mascot card featuring the three kids that were the McKinley High mascot in the “We’ve Got Spirit” episode.  This one is a parody of the Team Leaders card found in the ‘81 Topps basketball set. 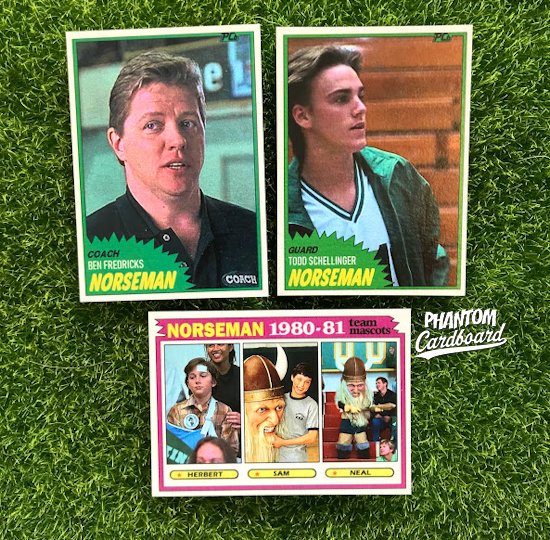 Lastly I did a few cards in the style of the 1981 Donruss baseball set bringing the total of vintage inspired card designs to five.  The cards are some of my favorites of the set.  With this design I paid homage to some of the McKinley High School groups.  Overall the 1981 Donruss design was not difficult to replicate but I might have spent more time on these cards with all tedious work it took to give the text in the lower right that two-dimensional look.

There’s the McKinley Cheer team from the “We’ve Got Spirit” episode, the Dungeons and Dragons loving AV Club and the Mathletes from “Looks and Books”.

Then, and I’m not sure where the inspiration for this idea came from, but I made a sort of two part puzzle card with the Freaks and the Geeks cliques.  The way this card lays out Ken gets cut pretty much in half.  Originally I had a similar image that split perfectly between the two groups, the only issue was that Kim Kelly, for whatever reason, was not in the picture and I just could justify leaving her out.  It’s not like she was introduced midway through the series.  The O.G. Kim K. was a core member of the Freaks and appeared in all 18 episodes.  The card HAD to have Kim.  The other thing is that with Seth Rogen spliced in half it’s a great visual cue that this card has a second part to it so I figure all’s well that ends well. 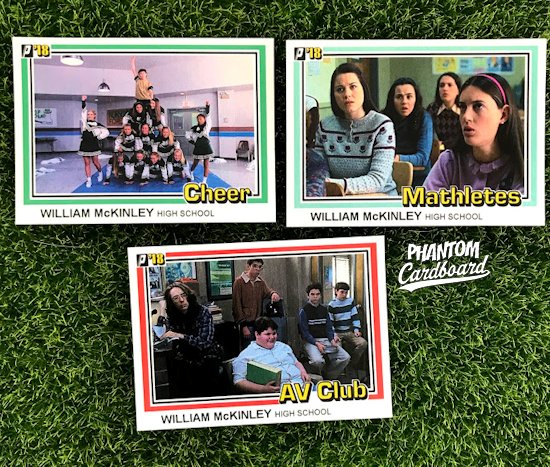 Fun fact: During the 2018 Tribeca Film Festival where Paul Feig was promoting the A&E Freaks and Geeks documentary he told of how NBC really wanted a small part, such as a waitress, written in for Britney Spears seeing as back in 1999-2000 she was about as popular as a person could get.

Posted by phantomcardboard at 6:42 PM