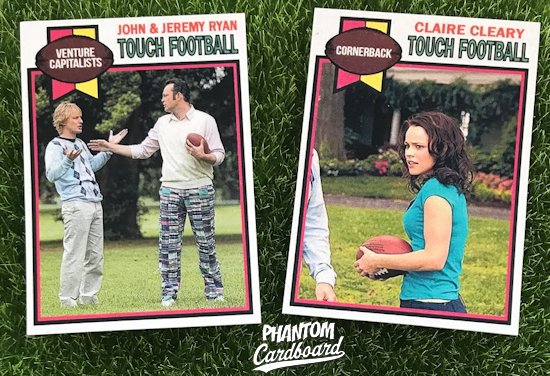 I caught Wedding Crashers on one of the cable channels and was reminded of the hilarious touch football game near the beginning of the movie.  From Bradley Cooper going HAM over what was supposed to be a friendly game of touch football to Carson Elrod’s hilarious taunts that I read were actually all ad lib.

Wedding Crashers was released in 2005, so in other words no matching it up with its 80’s equivalent football card set.  My aim was to use a design I had not previously and I also wanted to be a bit older.  I landed on a 1979 Topps football inspired design.  It had the older look I was going for and I like the positioning of the player position on the football giving me a prominent spot for “Crabcakes & Football” and the other in-jokes from the movie.

Okay, so now that you’ve seen the cards there’s one plot hole that never made sense to me… how did Sack’s friend get the scoop on John and Jeremy Ryan is he only knew them be there fake last name?  Plus, they weren’t really brothers either.

Posted by phantomcardboard at 6:16 PM