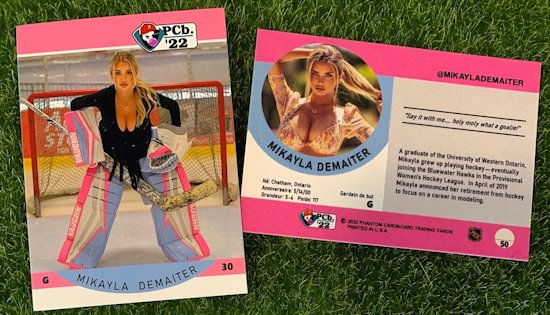 Upon completing the Michael Scott 1990-91 ProSet hockey inspired card I immediately wanted an excuse to use the template again.  The wait was not a long one having scrolled upon the image of everyone's favorite goalie turned model, Mikayla Demaiter.
Posted by phantomcardboard at 7:44 AM No comments: 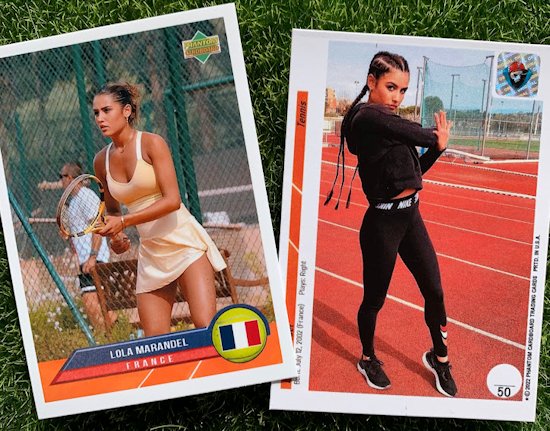 Maybe a month or so I was just looking through some of the cards I've made over the years, just sort of scrolling through the folder.  I came to the cards I've done utilizing the 1992-93 Upper Deck McDonald's basketball inspired design.  I noticed that the three cards I've done using this template have all been volleyball cards so that got me interested in trying out a different sport whenever the opportunity presented itself.

I recently started following French professional tennis up-and-comer Lola Marandel on Instagram.  While scrolling through her feed I found a couple of pictures I felt would work well for a custom card.

To give this card a tennis theme I switched out the hardwood bottom border for that of a clay tennis court and of course traded in the volleyball for a tennis ball.  I think my favorite thing about this card is the combination of colors.

Posted by phantomcardboard at 7:04 AM No comments: 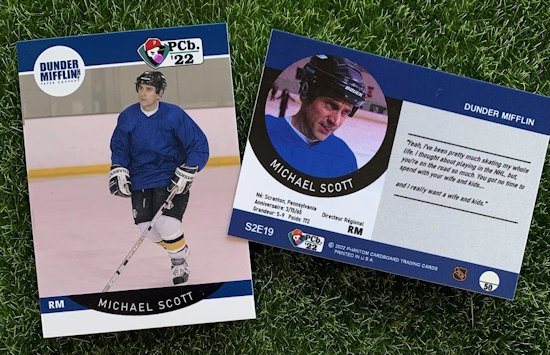 The Office is one of those gifts that keep on giving as far as me making some really fun custom cards.  This card is based on a Season 2 episode entitled "Michael's Birthday".  Kevin is waiting to hear back as to whether or not he has skin cancer which draws concern from his co-workers, much to the chagrin of the attention Michael feels should be paid to his birthday.  To shift the spotlight back on himself errr distract everyone from Kevin's impending prognosis Michael takes his crew to an ice skating rink for a skate party.  It should go without saying -because it's an episode of The Office- but it's a hilarious episode.
What's evidenced in the ice rink scene is that Steve Carell, in full hockey gear, is a very adept ice skater.  Growing up Steve was goalie and had aspirations at one time of a career in hockey, he even has an Elite Prospects page.  In the end Steve shifted his love of hockey over to a hobby to focus on a different career path.
Growing up I was not a big hockey fan because I didn't play hockey.  I've actually only ice skated once in my life.  Hockey is an expensive sport to get into and my family was a $5 Hot 'n' Ready family.  But I did collect hockey cards because... well ... they were cards.  The Red Wings were not dominant until I was in high school but it was still exciting to pull a Bob Probert, Sergei Federov or Stevie Y from a pack.
This card is done in the style of the 1990-91 ProSet hockey cards.  I remember buying a good number of packs of these at my local party store.  These were the first hockey cards from ProSet I believe.  ProSet was fun to collect because they were on trend with what was the newer look in sports cards back then.  They offered an alternative to Topps' traditional look.   White stock instead of cardboard, brighter colors and photography, less framed in and more full-bleed shinier photography and full color card backs, plastic packs as opposed to wax ... all things that could probably be credited to Upper Deck's influence on trading card aesthetics coming out of the 1980s and moving into the '90s.
This is the second time I've used this particular template.  The first time was 4 years ago with this Sea Bass card.  My cards have evolved a lot since then.  The biggest difference is that back in 2018 I was only doing card fronts.  My thinking was that's what really counts anyways, but I've come to realize how much better a complete card presents.  It takes twice the time to finish a card but it's so worth it in the end.  Obviously still a custom, but less of a custom, if that makes sense.
Posted by phantomcardboard at 9:58 AM No comments: