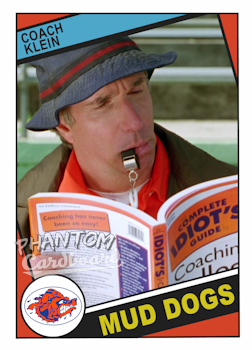 Here's my Coach Klein card from The Water Boy.  This is a movie that came out in 1998, and as far as card design goes, that's way out of my wheel house.  Instead I chose to go with the 1984 Topps football design.  One, because I wanted a design that called for a logo so I could utilize the SCLSU Mad Dogs logo, and secondly I already had the template created from using it to make Revenge Of The Nerds cards.

Here's my autographed copy.  I'd love to make more cards from this movie but as of now it seems as if Henry Winkler is is the only reliable TTM signer. 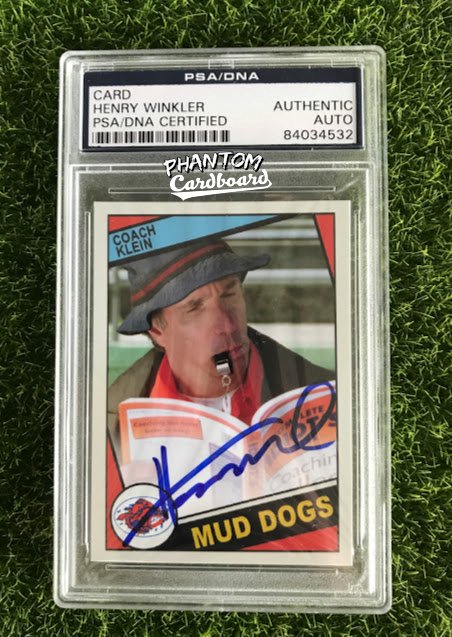 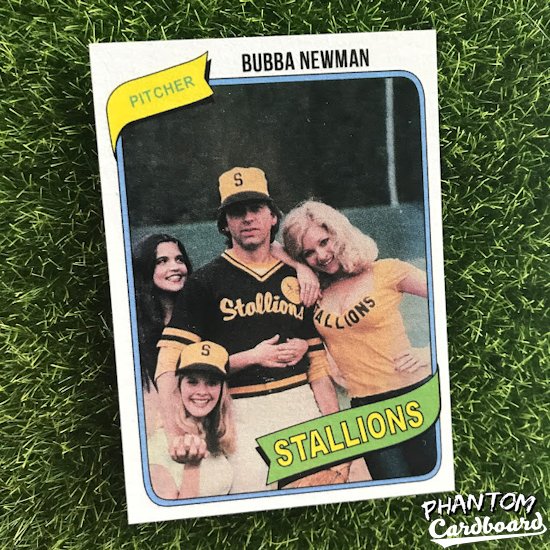 This card marks my first artist collaboration.  Kristian from kcdesignz.com contacted me with some cool suggestions for cards.  One of them was for a Bubba Newman card from the 1980 TV movie The Comeback Kid.  This was a movie I'd never heard of before.  I YouTube'd it and began watching. Within maybe 5 seconds I knew this was a card I'd be making.  I ended up watching the whole movie and now have my eye out for a VHS copy to add the the library.

The image I most wanted to use for the card was the one on the VHS slip cover.  Problem was there was a lot of other stuff that I'd have to remove before it was card ready.  I simply mentioned this to Kristin and before I knew it he e-mailed me a masterfully edited picture. The guy is quite the pixel wrangler, and that saved me a ton of time.

For the card I went with the 1980 Topps baseball design.  This was a first for this template, although it had been on my radar for some time, it was just that nothing from 1980 quite piqued my interest enough.

I used a San Diego Padres card for the card's colors as the fictional minor league San Jose Stallions shared their uniform colors.

Regretfully this is another card I have no chance of getting signed.  I love John Ritter.  When I was a kid I didn't get all the double entendre humor that was Three's Company.  I was just a dumb kid.  It wasn't until I watched reruns later in life that I realized how brilliant of a comedian John Ritter really was.

Also, I enlisted Kristian's skills a second time for some help on a preexisting card. I'll be updating that post and this one soon with our results.

Posted by phantomcardboard at 5:15 PM No comments: 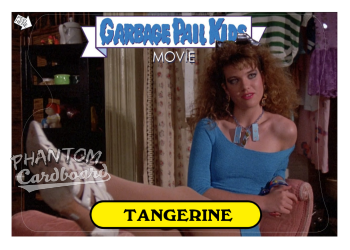 One of my great loves from childhood is Garbage Pail Kids cards.  There was a point in time where life was measured .25 at a time; going to the party store and geeking out when a new series hit the counter.  Even today, looking through old Garbage Pail Kids transports me back to spreading my cards out on my bedroom floor and admiring the artwork or trying to complete the puzzle on the card backs.

I've been wanting to somehow make a Garbage Pail inspired custom card.  But, nothing seemed to make sense with the design.  I mean, I like to think my cards a 50% vintage design and 50% pop culture. They blend equal parts.  GPK's on the other hand I just thought it always be Garbage Pail top heavy. Plus, GPK's are illustrations and I wasn't about to try and paint a picture, ya know?

For the first in what is sure to be a series of cards I chose Katie Barberi's character, Tangerine.

I found a picture that works as a horizontal card.  I chose to mask some of the Garbage Pail logo with Tangerine's hair as opposed to dropping it in front of her.  I made the Garbage Pail logo like the one seen on the movie poster.  It's not a sticker but I thought it'd cool touch to add the famous "peel here" arrow and a faux sticker die cut.  I think it turned out gross, which is Garbage Pail for great. 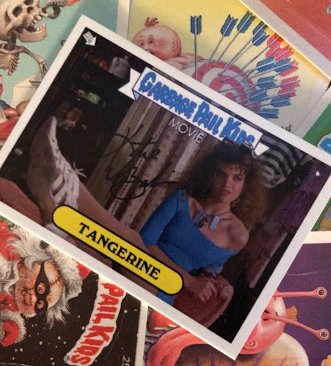 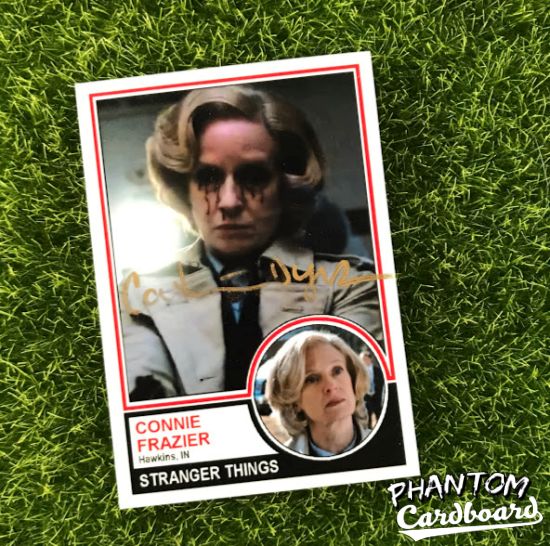 Probably my favorite part of creating these vintage inspired trading cards is when I get others who are into them as well.  I put a lot of time into them, so it's just a great feeling.

Not all that long ago - as documented here - Matthew Modine shared my Stranger Things card of him on his Instagram account.  If that wasn't crazy enough it was seen by Jason MacDonald, the husband of the actress (Catherine Dyer) who played Agent Connie Frazier; Matthew Modine's character's right-hand lady on the show.  Jason, also an actor, and Catherine have been collecting Connie Frazier fan art and wanted to add one of my cards to their collection ... what!?  I loved Stranger Things so of course I jumped (almost literally) at the opportunity to make this card (and have a copy signed!).

After selecting a couple of good images to fit into the 1983 (the year ST is set in) Topps baseball inspired design I created the card and shipped a few copies down to Atlanta.  I also asked that if all possible could Catherine take a snapshot of herself with the card.  As you can see from the pictures below Catherine and Jason were more than gracious with me, even throwing in a couple of rad vintage trading cards from Jason's own personal collection!  It was a true honor and privilege! 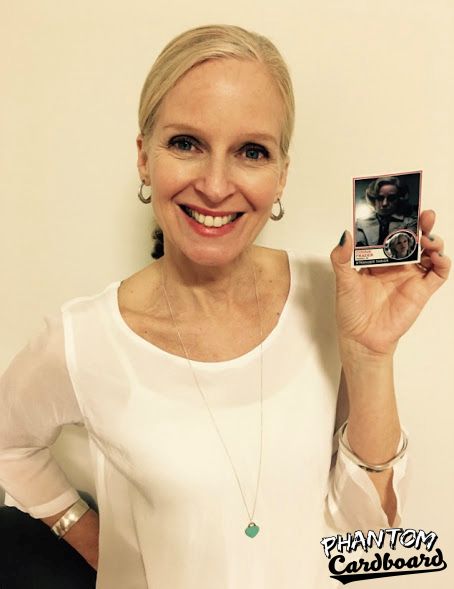 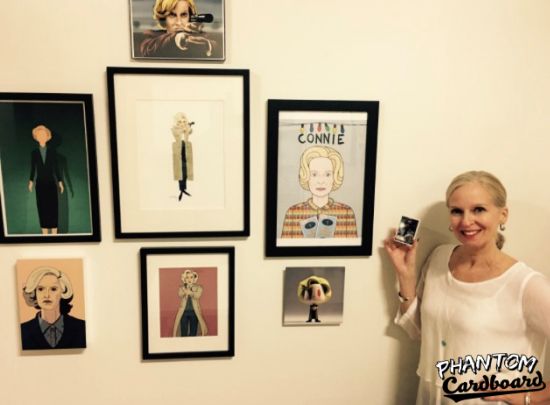 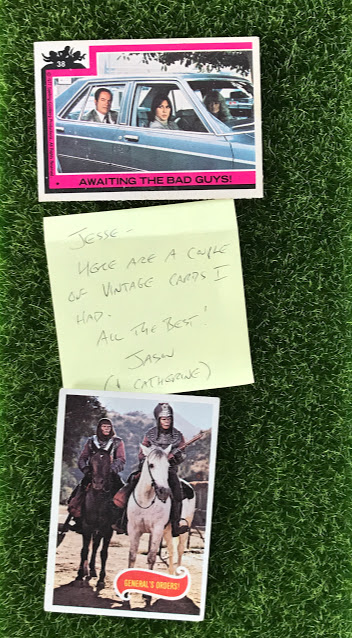 Posted by phantomcardboard at 8:20 AM 2 comments: 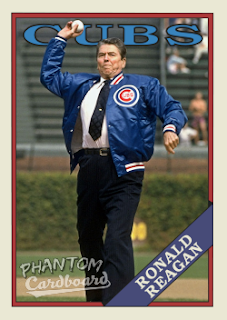 In the growing list of cards I've made with no hope of getting autographed add a 1988 Topps style Ronald Reagan to the collection.

Most of my cards are '80s-centric and President Reagan is right up there with Madonna and Michael Jackson as far as being identifiable with the decade.

"The Great Communicator" threw out the ceremonial first pitch at Wrigley Field in a late season Cubs - Pirates game.  Mr. President actually threw two pitches, not being satisfied with his first.

If this was a real card back in 1988 it probably would have been my favorite card.  I could just see myself being overly excited about a card of the POTUS playing baseball.

... A little known fact is that after graduating from college in 1932, Reagan started out as a sportscaster at WOC Radio in Davenport, Iowa. WOC later consolidated with WHO in Des Moines, and Reagan gained national media exposure recreating Chicago Cubs baseball games from the studio. He became a lifelong Cubs fan due to this early affiliation to the team.
Posted by phantomcardboard at 5:03 AM No comments: 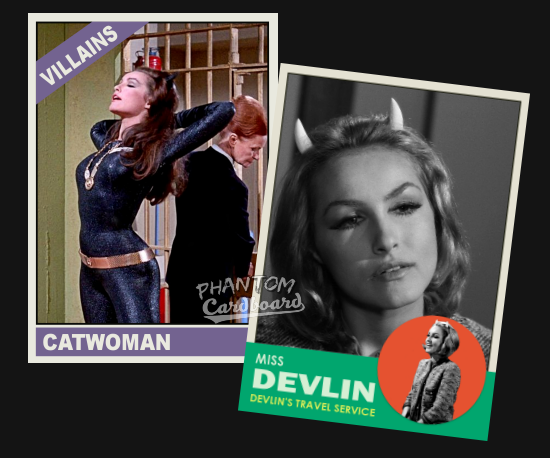 I'm surprised with myself that I've just now got around to making these two cards.  Put it this way, looking back I'm equally surprised that the origin of me making custom trading cards didn't come from me wanting to have a Miss Devlin card.  To be fair, Rittenhouse Archives did make have an "Of Late I Think Of Cliffordville" subset in their 2002 Twilight Zone Series 4 card set.  But, I like to think mine is a bit different melding the character into a year specific card design.

For some background, Julie Newmar is my all-time #1 crush, especially as Miss Devlin.  I believe I was in my early 20's when I passed by my t.v. that was -until that moment- providing background noise when I was literally stopped in my tracks.  I froze and just stared.  It was on a rerun of a Season 4 episode of The Twilight Zone entitled "Of Late I Think Of Cliffordville".  Upon researching it I found that the character Miss Devlin was played by Julie Newmar in that 1963 episode.  I realized at that moment that I was born about 50 years too late.  The episode itself is just okay with Julie being it's saving grace.

Like I said, I'm surprised I haven't made this card until now.  I've actually commissioned other Miss Devlin collectibles.  Perhaps I was just wanting to make sure I could do it justice as I'd like to think that even if I wasn't the one making these cards I'd like them to be something I'd still want to own myself. 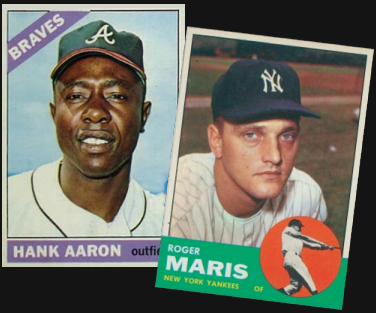 I went with the 1963 Topps baseball design.  Most of my stuff is confined to '80s nostalgia, so this was kind of fun to step out of the box a bit.  Simple enough design, but a lot of time was spent carefully masking out the smaller image inside the orange circle.  On Topps' cards the main image was a color photo was in color while the smaller one was in black-and-white.  The Twilight Zone was shot in black-and-white back then, therefore the stills I have were not in color.  I did actually attempt to colorize this photo.  I watched and read tutorials on how to do it.  At the end of the day I was just not satisfied with the end result.  Maybe with some practice I could go back and retry it, but for now it'll remain colorless.

I didn't realize at the time that Julie Newmar was the same person who played Catwoman in the '66 Batman television series.  I mean, I knew Catwoman was a smokin' hot classic babe, I just didn't necessarily know it was Julie Newmar that made her that way.

Since Julie is more recognizable as Batman's feline villainess foe I also wanted to make a Catwoman card. Since the old Adam West Batman series is synonymous with the year 1966, the Topps design from that year was really the only choice.

The 1966 Topps is almost about as non-complicated as it gets.  Even more so than the 1963 design used for the Miss Devlin card.  So, this one really relies on the image to make it pop. I think that happened.

These are two more cards I made with little hope of getting signed.  Julie sells signed merchandise from here official site.  I e-mailed them about the possibility of purchasing autographs on these cards, but I never got a response.

UPDATE: As I mentioned, I attempted to colorize this picture but I guess I gave up because I grew impatient at not being the best at this technique on my first try.  After teaming up with Kristian from kcsdesignz.com on my Bubba Newman card I asked him to see how he fared with adding some color to my Devilish crush.  I'd say he smacked one out of the park: 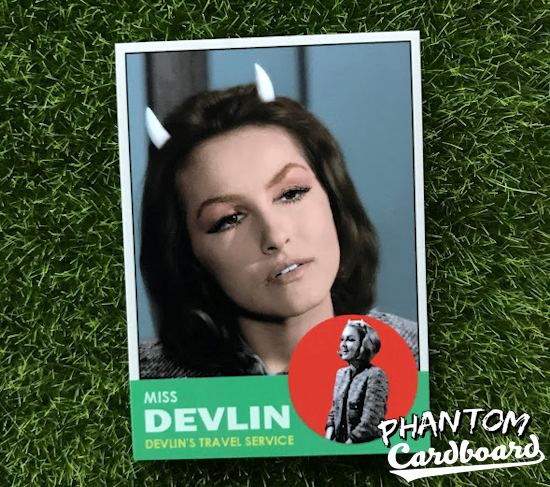 Posted by phantomcardboard at 5:28 PM 2 comments: