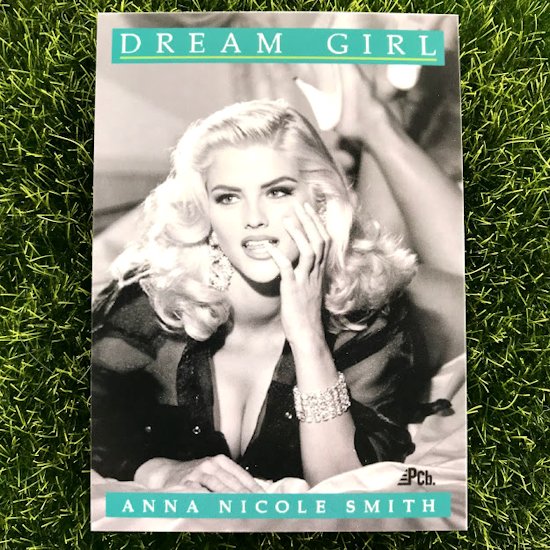 I was thirteen when I first became aware of the voluptuous model Anna Nicole Smith.  I have to believe that’s a very influential age for a boy when it comes to shaping what he finds attractive in a female because Anna Nicole became, for me, the prototype of the ultimate female form.  My “type” since then has always been the ultra curvy amazon type. 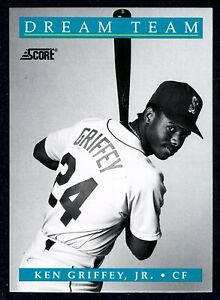 There wasn’t the internet back then and at thirteen you can’t just go into the party store and buy a Playboy so I clearly recall scouring all of the different magazines we had in the house hoping to run across an Anna Nicole Guess? Jeans advertisement.  Even National Geographic got a page-by-page examination.  Guess? did a great job with  Anna and the sultry black-and-white ad campaign which had a sexy old Hollywood bombshell vibe to it.  As the years went by my preference for the “Anna Nicole Smith type” was cemented but my attraction to the actual person waned with all the bizarre happenings in her life from her marrying the geriatric billionaire to her weird reality show and ultimately her untimely and pretty sad death.  This card is a tribute to the best Anna, the one who’s look and natural charisma captivated so many like myself.

I thought one of the pictures from the Guess campaign would be perfect to retrofit into a 1991 Score baseball “Dream Team” inspired design.  1991 Score’s base set to me is real bland but no other set can touches that year’s subsets.  That years was loaded with a number of attractive and creative subsets.

“Dream Team” was a 13 card subset that featured baseball’s best in artistic black-and-white studio style photographs.  It’s pretty easy to see why I chose to match Anna’s photo to this set with one slight variation turning the word 'Team' into 'Girl' because for a period in time Anna Nicole Smith was most certainly my “dream girl”.  I’ve actually been wanting to make a card for her for a little while now but I wanted it to be something that was special and made sense from the design standpoint.  I think this card achieved both.

Posted by phantomcardboard at 4:57 PM No comments: 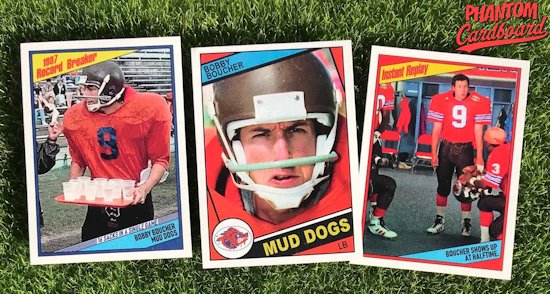 I'm really excited to share this mini-set.  It ranks right up there with my Bloodsport and Major League as far as it's comprehensiveness both to the movie and the card set used for it.

I actually started this set back in 2016 with the Coach Klein card.  That was when I was making one offs in hopes of getting my cards autographed through the mail and Henry Winkler is great at signing for fans.  Since The Waterboy came out in 1998 (I wasn't collecting cards then, no nostalgia) I went with the 1984 Topps football inspired design.  The main reason I chose that year was I wanted a design that used the team logo so I could feature the Mud Dogs logo. Then came the Bobby card that was going to get signed through a connection but that never materialized.  Just recently I added the Vicki Valencourt card for a private signing she was doing that I sent the card into.  Getting that card signed really inspired me to make this thing official.

My favorite part of doing mini-set is after the base cards are done looking for applicable ways to use a certain design's subsets.  The subsets are my favorite.  It's the trading card junkie in me that loves the uniqueness of re-purposing the subsets to fit the movie .  Especially record breakers.  Record breakers are my absolute favorite to do.  Knowing Bobby shattered the single game sack record in The Waterboy I knew I'd have a lot of fun with that card.  I usually make mention of the record that was broken on the front of the card whereas the actual cards went into that information on the reverse side.  I borrowed something similar to the "Topps Super Rookie" tag found in the 1988 Topps football set.  It's definitely my favorite card of the set.  Very happy how it came out as well as the rest of the set. 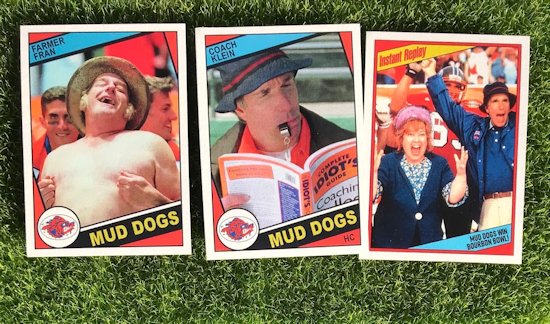 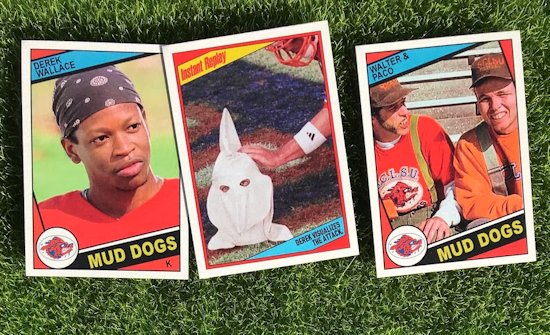 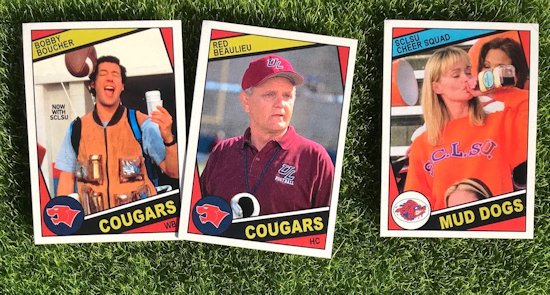 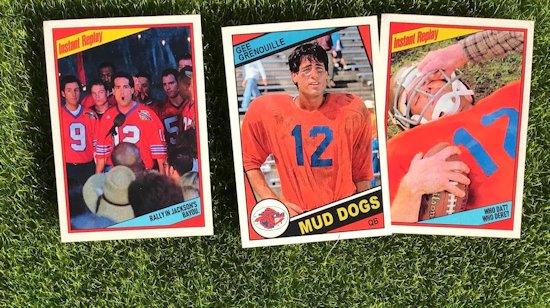 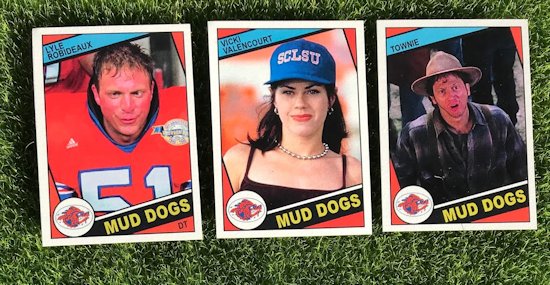 Posted by phantomcardboard at 5:07 PM No comments:

Have Cap, Will Custom 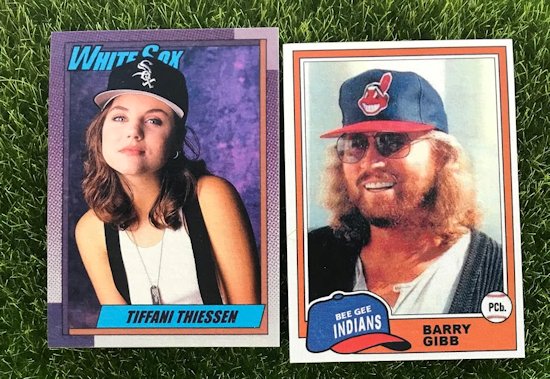 Tiffani Theissen and Barry Gibb don't have anything in common (to the best of my knowledge) outside of the fact that I recently seen a photo of each of them wearing a hat of a professional baseball team.  That's about all it takes for me to want to make a card.

I didn't have a year of significance for either picture so I used two templates that I just thought would compliment the picture.  Tiffani Theissen White Sox with the 1990 Topps baseball inspired design and Barry Gibb Indians with the 1981 Topps.
Posted by phantomcardboard at 6:37 PM No comments: 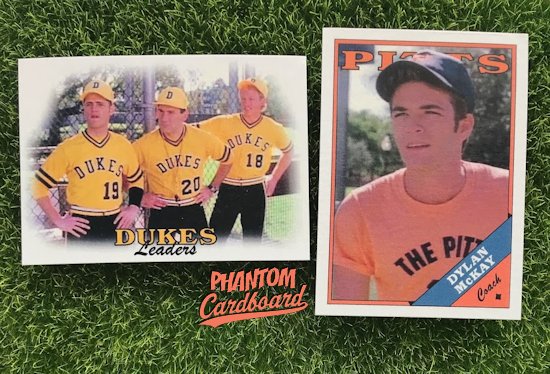 The passing of Luke Perry was one of those celebrity deaths that hit just a little harder.  One because he far too young at 52 and also you could tell by the outpouring of support by his peers that he was a genuinely good guy by the stories they shared of their interactions with him.  I was surprised to hear he had a stroke and shocked when he did not recover.

Sometimes you hear of a celebrity passing and you think that it's too bad but we just kind of go on.  Luke's passing has stuck with me.  I really hadn't thought about Beverly Hills 90210 in awhile but with Luke's passing I remembered just how huge of a fan I was of that show while growing up.  Every Thursday for years and years starting with the very first episode that aired on October 4, 1990 I spent with that group from West Beverly High.  I'm not ashamed to admit it, I was hooked.  I even collected the 90210 trading cards Topps put out in 1991 for a short while.

Luke's Dylan character was one of those "every girl wanted to be with him and every guy wanted to be him" types.  His demeanor was just so cool.  He was often called our generations James Dean.  Sure, he and a few of the cast members seemed a little old to be playing high school characters; I mean the West Beverly gang was nothing like my friend's older siblings that were in high school, but I didn't care, it was good TV.  I specifically remember trying to mimic Dylan McKay's low cool voice when I was talking to girls.  I thought I sounded cool and mysterious but I probably sounded like a major tool.  I also remember wanting a scar in my eyebrow like he had.

I was feeling nostalgic about the show so I started binge watching it from the first episode.  I got to episode #20 entitled "Spring Training", a baseball episode.  I really don't watch many television shows so I'm not sure if it's still the case but back in the day every series it seemed had a baseball episode.

This episode was one of those underdog feel good stories.  Brandon and Steve help Brandon's dad -who's laid up with a back injury- coach an overly privileged West Beverly team.  Brandon's frustration with the team's rotten behavior comes to a head when they scrimmage a team from the other side of the tracks coached by Brandon's Peach Pit boss, Nat.  Dylan is recruited to help coach up Nat's misfits for a second scrimmage, and they're also aided by a girl ringer that Andrea brings in.  Lessons in humility and sportsmanship are learned by all.  Admittedly a little cheesy, but I enjoyed watching it again after all these years.

Naturally I had a strong urge to make cards from this episode.  Both in homage to Luke Perry and a show I forgot I loved so much. 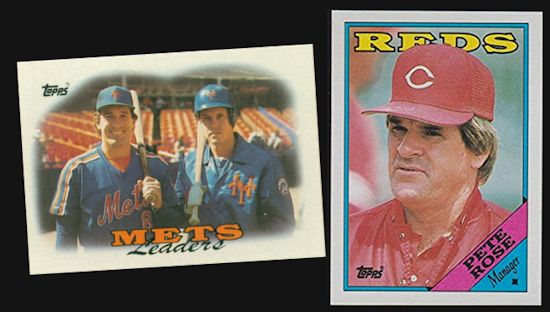 The episode debuted in 1991 but I chose to go with a 1988 Topps inspired design.  There wasn't a lot of decent pictures available online so the one picture with Brandon, Mr. Walsh and Steve Sanders I thought would be perfect for a Team Leaders card, which wasn't a subset in the 1991 set.  If I'm correct Topps did that subset from 1986 through 1989.  Since I was doing that card in the 1988 style I also kept Dylan McKay's coach card in the same design.
Posted by phantomcardboard at 2:54 PM No comments: 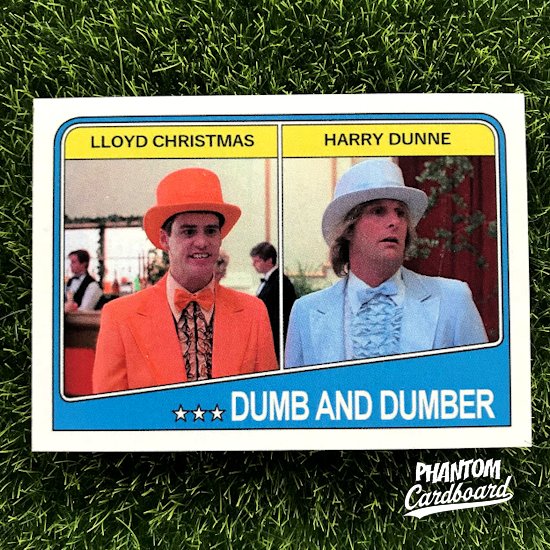 I've been wanting to make a Dumb and Dumber card so I started thinking about the movie’s different scenes and I decided I needed to make a card with of Lloyd and Harry in their orange and baby blue charity ball tuxedos.  I found the image above and knew it’d do great in the 1988 Topps football league leaders design I made for Step Brothers.

Dumb and Dumber is one of those movies I’ve seen more times than I can count.  Dumber and Dumber came out when I was in eighth grade so of course I loved it with humor that is tailor made for a middle school kid.  A buddy of mine had the VHS tape and we damn near wore that thing out.  He also had the movie’s soundtrack which is chock full of 90’s goodies.

Lloyd Christmas is probably neck-and-neck with The Grinch as my favorite Jim Carrey roles.  I also think Jeff Daniels is an altogether brilliant actor and I love the fact that he’s a Michigan guy that stayed home even after making it big.

This is the second card I’ve made from Dumber and Dumber, here’s the first.

Posted by phantomcardboard at 6:27 PM No comments: