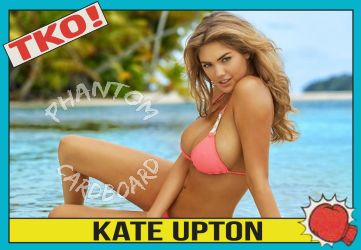 No mystery as to why I would choose to do a Kate Upton custom.  Shouldn't be anyways.  The first card is designed after the 1985 Topps Rocky IV set.  I call it my TKO! Series - that's corny for Total Knock Out!, and it's usually my go to template for the fairer sex that I'd like to make a card of, models and such.

This card is another using my 1985 Topps template.  I used it a lot at first until I started trying out other vintage designs.  I did this one for the Justin Verlander connection to my hometown Tigers.  I'd like to consider Kate (also an MI native) an honorary Tiger. 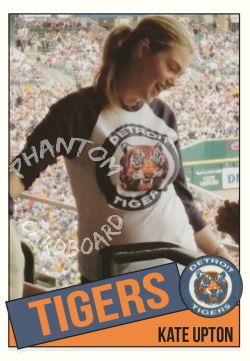 I've sent copies to an agency that represents her.  It's been awhile, but I'm willing to wait if they actually come through.
Posted by phantomcardboard at 3:39 PM No comments:

You Keep For Your Collection, I Know You Like It. 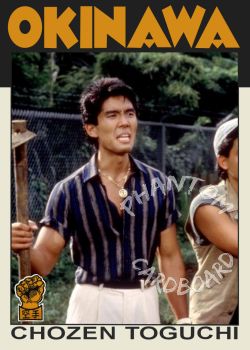 I'm a a HUGE fan of The Karate Kid franchise, well, the first three movies at least.  So, expect to see other Karate Kid customs on here is what I'm saying.

For this one I took inspiration from the 1986 Topps Baseball design as a tie-in to the year The Karate Kid II was released in theaters.  I figured this would not be a complex design to emulate, and by and large, it wasn't.  Except when it came to the font.  I couldn't find a font to match the original cards so I had to recreate the "Okinawa" from a number of different cards to get all of the letter.  As a little bonus I added the symbol that can be found on Chozen's Karate gi where the player position would normally be.

I sent a copy to Yugi Okumoto to be signed, as well as one for him to keep as is my custom - sort of a way of saying "thank you" for the autograph.  With my signed custom I also got a little note thanking me for his copy.   Needless to say that made my day.

Read more »
Posted by phantomcardboard at 9:49 AM No comments: 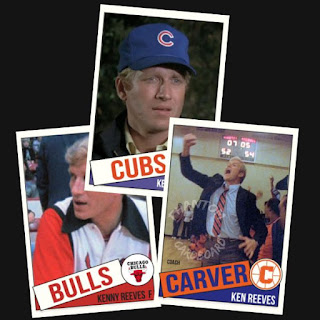 When I first started making my custom cards my main goal was to get on card autographs of the cast of The White Shadow, my all-time favorite television show.  If you're reading this and are unfamiliar with the show it was produced by Bruce Paltrow and aired on CBS from 1978 to 1981.  It starred Ken Howard as a retired NBA player that takes a job at an intercity Los Angeles high school as their basketball coach.   It was a groundbreaking show in that it was the first to feature a predominately minority cast and it dealt with real societal issues that had seldom been broached prior. It predates me a bit, but in the early '00s I happen to catch it on ESPN Classics and it was love at first watch.

Since no cards existed I decided to make some of my own.  I'd never really done this before.  The design is inspired by the 1985 Topps baseball card set, as it was pretty simple to reproduce.  I also like the fact that I could fill the team name block white to create a perfect autograph box.

I made three "Ken Reeves" cards.  One as a Chicago Bull, the NBA team Ken Reeves was drafted by.  One as a Chicago Cub, due to the character frequently sporting the cap.  And one as the coach of Carver High.  Carver didn't really have a logo, so I had to create one.

Well for starters, my name is Jesse.  When I was a kid I collected anything that came in a wax pack (or cello for that matter).  So, trading cards of any sort represent a very nostalgic part of growing up for me.  Fast forward a bit, not all that long ago I started sending some of my non-sports cards through the mail (TTM) trying to get autographs on them as a fun little hobby.  I realized that although some of my favorite things were on 2.5" x 3.5" pieces of cardboard, others were not.  So, I got the idea to try and make my own trading cards.  Through trial and toil -all of my photoshopping "skills" are self taught- I can now turn out some pretty cool cards with the end goal of having my little creations autographed by the card's celebrity subject.

You'll find that most of my cards are, but not limited to, '80s nostalgia.  Most of my designs pay homage to the classic Topps card sets I collected growing up.  I'd love to get autographs of people like Arnold Schwarzenegger and Sylvester Stallone, but they're not known for signing TTM autographs, so you probably won't see cards of them on here.

Enjoy.  Questions, comments, and "Yo Mama" jokes are always welcomed.

Posted by phantomcardboard at 7:11 AM 4 comments: