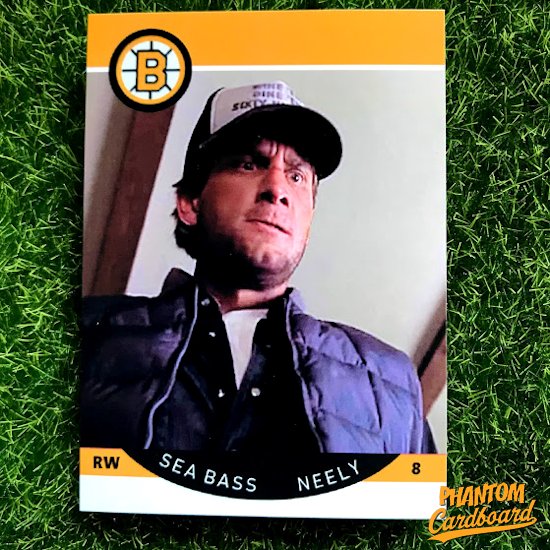 Here's another entry into category of athletes in movies that played characters that I did a four card post on last week. Again, the concept is mashing the movie character with one of the athlete's real trading cards.

I may not be the biggest hockey fan residing in "Hockey Town", but I do know who Can Neely is. Despite that I didn't know until recently that the 2005 Hockey Hall of Fame inductee was the guy who played "Sea Bass" in 1994's Farrelly Brother's classic Dumb and Dumber. I, like I'll assume everyone with a pulse, loves Dumb and Dumber. I guess I just never stopped to look at the credits to see who so brilliantly portrayed Mr. Bass. For the little time Neely was in the movie he has a couple of the most memorable scenes, in my opinion.

Growing up I didn't collect many hockey cards so most of the designs hold very little personal meaning to me like the other three major sports do. That's not to say I don't love using the designs for my cards, it's just not quite the same as remembering busting open packs of cards that look like the ones I recreate for my custom cards. The only two hockey sets I ever remember buying were both the 1990-91 Topps and ProSet. The reason being is that one of the party stores close to my house at the time had them and I collected any type of trading cards... any. I remember getting a lot more of the ProSet than the Topps. If I remember correctly they were on a slightly thinner, slightly glossier and more vibrant stock than Topps.

I've used the 1990 Topps inspired design a couple of times so I switched it up a bit and tried the ProSet on for size. I like the way this turned out a lot. It is unmistakably 1990 ProSet hockey. The one and only thing I would change if I could would to have a clearer shot of Sea Bass' "Wine 'em, Dine 'em, Sixty-nine 'em" trucker cap.
Posted by phantomcardboard at 9:33 AM