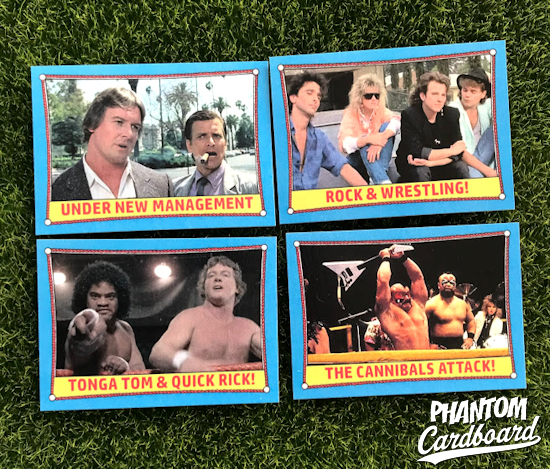 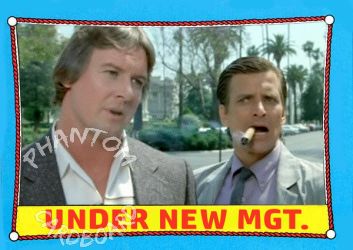 Body Slam is one of those movies, while not very popular, is one of my personal favorites.  I remember it coming on quite often on HBO in the early '90s, and I must have caught it most every time.

If you've never seen it, Dirk Benedict plays M. Harry Smilac, a smarmy scheming music producer that is scraping the bottom of the barrel.  He inadvertently stumbles into managing  the wrestling tag team of Quick Rick Roberts (Roddy Piper) and Tonga Tom (Sam Fatu).  He barnstorms the duo in a cross-country tour double billing them with his last remaining musical act, Kick, as rock and wrestling two-for-one, the whole time running from creditors and wrestling adversaries.  It's a fun watch, no doubt.  Plus, Tonya Roberts is very easy on the eyes.

I modeled this after the 1987 Topps WWF set, which I collected the crap out of as a kid.  I loved wrestling back then.  Now, nottt so much.

I got this card signed by Mr. Benedict, along with a 1978 Topps Battlestar Galactica card, and a 1983 Topps A-Team card.  I love that he inscribed it with the character name.

A couple of Body Slam fun facts from the movie's Wiki page:

As a bonus here's another I did of The Cannibals tag team. 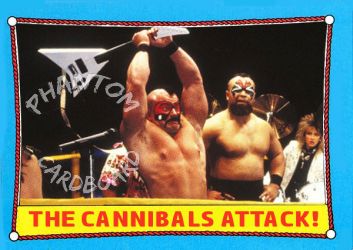 Posted by phantomcardboard at 7:29 PM