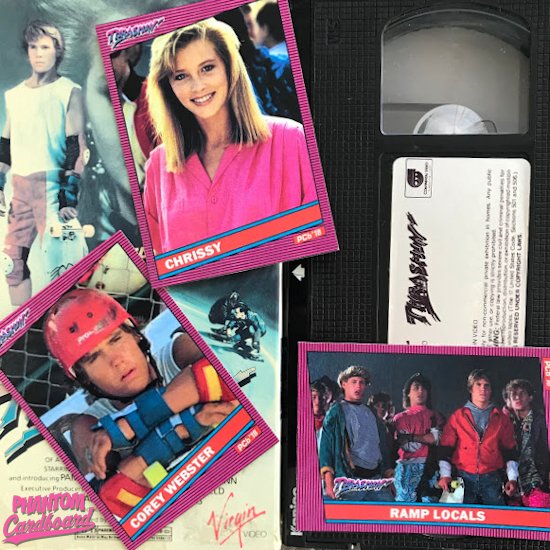 If you’ve never seen it, Thrashin’ is ninety-two minutes of 80’s awesomeness.  I think if I was teaching a course on 80’s cinema it would be on the required watching list.

For my money Thrashin’ is the Citizen Kane of skateboarding movies.  But, I guess a movie that has a similar story as my all-time favorite movie, The Karate Kid, would create some bias in my eyes.  Corey Webster (Josh Brolin) is the new kid in town who quickly finds himself the annoyance of a rival gang and the only way to settle things is a big competition for Southern California skate scene supremacy.  There's also that idea of a class struggle, although in this movie the protagonist is on the Valley end of things.  Mix that with shades of Romeo and Juliet with Corey’s love interest Chrissy (Pamela Gidley) being the younger sister of Hook (Robert Rusler), the leader of the punker skater faction “Daggers”, sworn enemy of the Corey and his “Ramp Locals” buddies.  If you're a fan of fine 80’s cheese this flick is Havarti. Mmmmm. 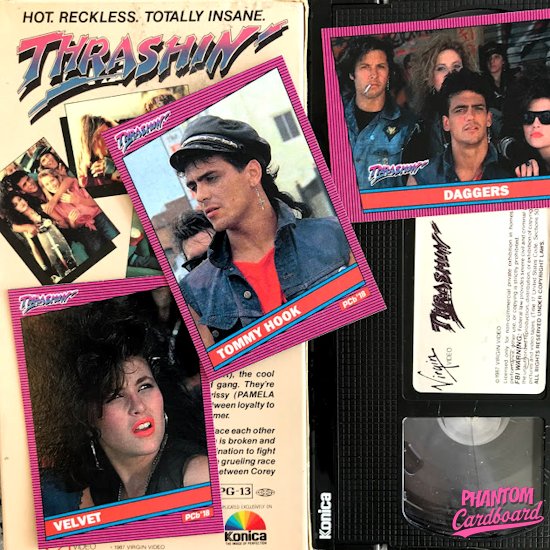 If that little write up isn’t enough to make you shell out the bucks to get your very own VHS copy then maybe this line will seal the deal:

And if your STILL not convinced there's lots of rad skate scenes and cameos by the likes of Red Hot Chili Peppers,  pro skaters Tony Hawk, Christian Hosoi, and Eddie Reategui.  Plus, it was the film debut of Lost Boys' vampire Brooke McCarter.

Alright, now for the card mini-set.  This was the second time I used the 1986 Donruss baseball inspired design, the first was with my set for The Wraith (also with Sherilyn Fenn).  Although this time I took a couple of gnarly creative liberties. I changed the color of the frame to pink.  It's a color that's used in the movie's logo plus it's a predominant color of the 80's fashions worn in Thrashin'.

On the veritcally oriented cards I moved the Thrashin' logo to the upper left of the card.  I just thought it looked better.  On the horizontal cards I put it back in the lower left of the image where the team logo would be for the '86 Donruss.  I also added a 1986 Donruss-esque Phantom Cardboard logo which I thought fits nicely with the overall design.

Posted by phantomcardboard at 4:29 PM