I Ain't Got Time To Bleed! 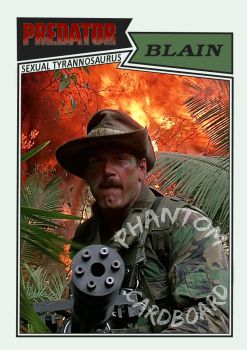 Some really cool movies came out in 1987, but Predator may be the coolest.  Former MN Governor Jesse "The Body" Ventura is 1B to future "Governator" Arnold Swarzenegger's 1A when it comes to badassery in this movie.  Arny gets the A designation because he manager ice that "ugly motherfucker" of an alien Predator, but, other than that, they're neck-and-neck in my opinion.

This card is designed after the 1987 Topps football set.  I originally set out to model it after the baseball set from '87 but that damn wood grain gave my no formal photoshop training ass fits.  In retrospect I'm glad it did because I love the way this template looks.  Usually I try to get a close match to the original card's font, but in this case I went with the movie's font and I like the way that came together.  In the space designated for "Topps All Pro" I decided to give "Blain" credit for being a "sexual tyrannosaurus".  Then, I could not have asked for a more fitting photo with a fresh explosion in the background and Sergeant Blain Cooper pressing forward wielding his M134 Minigun with a cheek full of sexual tyrannosaurus fuel.


Jesse Ventura is a quick reliable signer.  I'd previously gotten an old WWF card signed TTM from him.  He personalized the card, which I'd rather it not be, but I still love it. 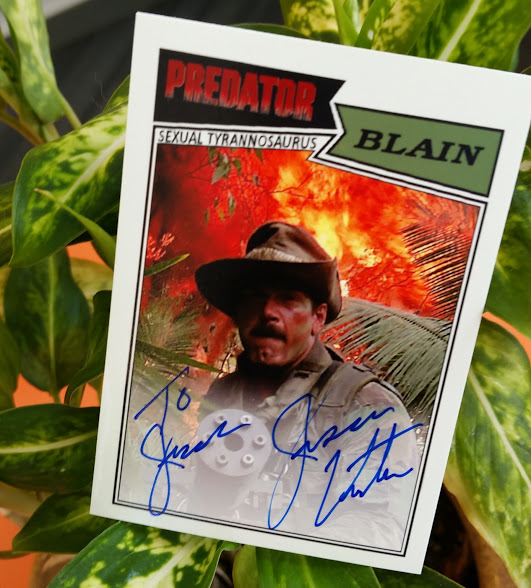 Posted by phantomcardboard at 11:29 AM