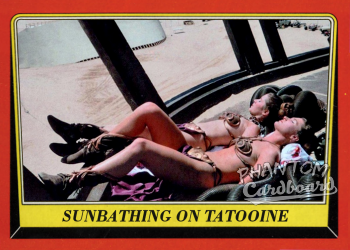 In 2009 photos from 1982 of Carrie Fisher and her stunt double Tracey Eddon sunbathing in identical Slave Leia bikinis were leaked to the internet.  If you fall in a certain age bracket chances are that Princess Leia was your first crush, so multiply that times two and you can understand why this behind-the-scenes shot caused such a stir.

The photo is from the set of Return of the Jedi.  It's in Yuma, Arizona which served as Luke Skywalker's home planet of Tatooine.  Carrie and Tracey are soaking up rays between scenes on the deck of Jabba's Sail Barge.

I made this card as sort of a custom supplement to Topps' 1983 Return of the Jedi card set.

Posted by phantomcardboard at 6:48 PM