Is That Goal Regulation Size, Or What!? 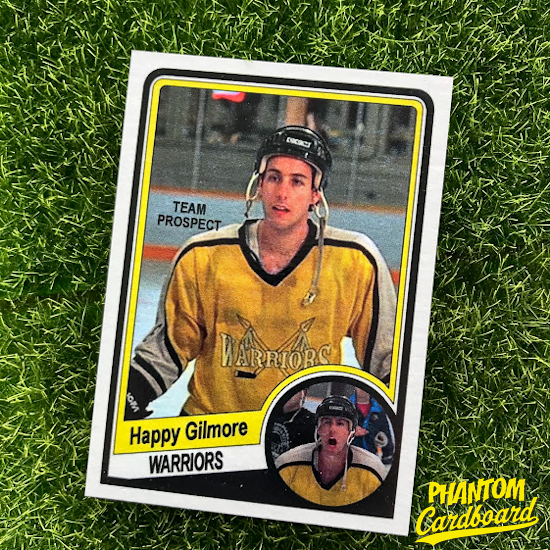 For the longest time I didn't make any cards featuring Adam Sandler despite all of his classic sports related movie roles.  I just didn't think there was a good chance at getting any of my cards signed.  That all changed because now I know a guy who knows a guy who can get me some Sandler sigs. Once that relationship was forged I went to work and churned out 7 Sandler joints as they say in hip-hop circles.

The one above is by far my favorite of the lot. Sandler has some fun movies, but I have to think Happy Gilmore is the best. It starts out right away on a hilarious note with Happy trying out -unsuccessfully for at least the tenth time- for the semi-pro (I'd presume) Waterbury Warriors. That whole scene is classic, and now has a card devoted to it.

Happy Gilmore was released in 1996 but, like I have with almost anything released after roughly 1990, I plugged it into a more vintage inspired design.  For this one I used a 1984 Topps hockey inspired design.  For the record, I f***ing love this design and have used it any time it has made sense to me to create a number of really fun cards. It screams 1980's card design to me. I love the rounded two-tone frame and the secondary picture.

I used the Warriors' team colors for the two-tone frame of course.  My favorite part might just be the "team prospect" text.  Every so often you'd see text like that reading something like "traded to the ..... ".  I always assumed it was a last minute thing when a guy would be traded but it was too late to re-do his card.  Since Happy never officially made the Warriors' roster, well, he's a team prospect.

Now, I'll just wait with bated breath for some Sandler autographs. If you'd like to own a copy of this card it's available in the PCb online store.

Posted by phantomcardboard at 1:16 PM