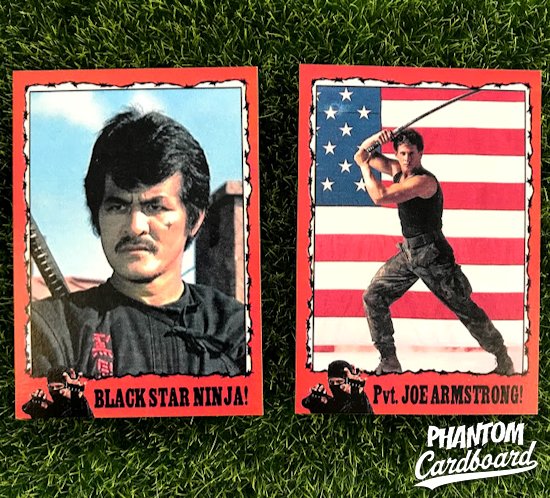 Ahh, American Ninja. Just the name alone let’s you know you’re in for some ‘80s. There were few things quite a hot as ninjas in the 1980s and then Cannon Films went and turned it up to eleven by adding the armed forces element in a period where it was still marketable to be patriotic.

American Ninja is a treasure trove of ‘80s B-movie guilty pleasures. There’s some pretty good action sequences. When I watch it I always seem to be caught off guard when guys are killed in the movie. I guess I expect it to be like a live action G.I. Joe where the good guys just sort of run off the bad guys but no one is actually  mortally wounded. I read that Michael Dudikoff had no prior martial arts training but I think he pulled off the karate action convincingly. The late Steve James himself makes for a pretty badass number two, but they probably could have written in some more ass kicking for him to make his character a bit more memorable.

Now that the heroes are in place we need some baddies with foreign accents to stick with the genre’s trope.  Treacherous arms smuggler “Victor Ortega” and the paid services of the deadly “Black Star Ninja” will do nicely. If this was a card set back-in-the-day the “Black Star Ninja’s” card would be the one I would have been busting packs open in search of. Kind of like how “Storm Shadow” wasn’t a Joe, but he was THE coolest and most must-have figure of the G.I. Joe toy line. 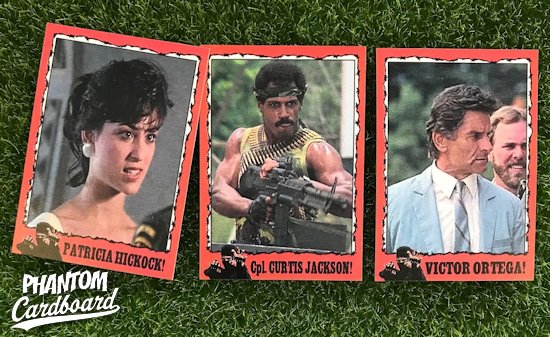 Of course you also need a beautiful love interest which was played by Judie Aronson as “Patricia Hickock”, the colonel’s daughter. Besides Steve James being underutilized the only other thing I would changed about American Ninja would have been a little skin from Judie as she’s among my top ‘80s crushes. I guess I could always just watch Friday the 13th part IV. Or The Sleeping Car. Or Cool Blue.

Judie’s card was the first one I made. Judie signs through the mail, so I just needed something for her to sign, which she did! Then as I’ve begun to expand my singles to mini-sets it was American Ninja’s turn after coming across the awesome picture that was used for Dudikoff’s card. American Ninja was released in 1985 so I chose the Rambo: First Blood Part II set by Topps from the same year as the inspiration. I actually think the template works perfect. I wanted to use the yellow burst like in the lower left of the Rambo cards but the orientation of the Dudikoff picture I chose just would not lend to that as it’s wider than it is tall. I made it so American Ninja “Joe Armstrong” is stealthily popping in from below to deliver a blue-eyed death blow in his full ninja garb. I think it works great and gives the card its own feel even with the red and barbwire being recycled from the Rambo card.

I’ve been making mini-sets that are as large as 15, 20, and even 25 cards lately, but this one stopped at five.  There was maybe a couple other characters that could have got a card but they just weren’t, in my opinion, interesting enough and I thought would ultimately take away from the five characters that do make up the set.

Fun Facts:
American Ninja is a full blown franchise having spawned 4 sequels … Chuck Norris declined the American Ninja lead not wanting to cover his face … Kurt McKinney of No Retreat, No Surrender fame auditioned but ultimately didn’t land the role because he looked too young … In an interview Michael Dudikoff says he contracted malaria while filming in the Philippines which is what he attributes being excessively sweaty in fight scenes to

Get your own set now in the PCb card shop.

Posted by phantomcardboard at 7:09 PM