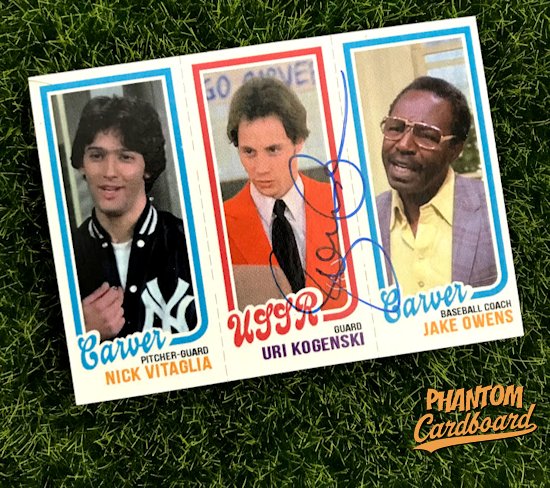 This TTM autograph success you see here is a pretty big deal to me. I may of may have not mentioned in the past that The White Shadow is absolutely my favorite television show of all-time.

I love The White Shadow for a number of reasons. For one, it mashed ahead-of-its-time subject matter with relateable humor. Secondly, my favorite sport is basketball. The cast was super talented. I actually didn't know about the show until the early 2000's when I just happened to catch it on ESPN Classic. I instantly fell in love with the show. I think I wrote about this before but there was a point in time when I was younger and my family lived in Detroit. This made me really cling to Timothy Van Patten's "Salami" character while watching seeing I was one of the only white kids in a predominately black group of friends. Basketball is what bonded us like "Salami" to his Carver teammates.

This card is signed by Mr. Jon Gries. You most likely know him as "Uncle Rico" from Napoleon Dynamite. I, like most, love that movie and the "Uncle Rico" character. But, I really geek out to Mr. Gries as "Uri Kongenski" from the "The Russians Are Coming" episode of The White Shadow. The episode is about Russian high school basketball team that was doing a goodwill tour of the United States and Los Angeles' Carver High was the their last scheduled stop. Relations with the Soviet Union was a very topical issue when this episode came out during the Cold War between the United States and Russia. Carver and the Russian squad play a spirited exhibition game following which one of the Russians, played by Chris Mulkey, attempts to defect by hiding out at one of the Carver player's home whom he had befriended during the visit. In my note requesting the autograph I asked Mr. Gries if he had any interesting memories of working on this episode. He said he didn't remember much since it was so long ago but he did say it was between he and Chris Mulkey to play the lead Russian.

Since I've been messing around with making custom trading cards I've done a couple of different White Shadow designs. This is by far and away my favorite. I wanted to do justice to a show that I feel doesn't get near the recognition it deserves in the annals of great television shows, sports themed or otherwise. Even for a relatively short run, 3 seasons, this show was outstanding and groundbreaking TV. I wanted to give the show a great card and what better way than with a 1980-81 Topps basketball inspired design made iconic by the three-paneled perforated #6 card that features Dr. J and rookies cards of Magic Johnson and Larry Bird.

I had the idea for The White Shadow in this design for a very long time.  But, for whatever reason, I was a bit intimidated by the design. Maybe because it's like 3 cards in one? Plus, I just wanted it to be pretty good if I was going to use it for Shadow. After getting some custom card reps under I belt I went for it. Turns out I fretted for nothing. It came together pretty smoothly. I found a groovy font that I believe is passable for the design and just took my time with the rest and I made something I'm really proud of. I even added some perforation marks, though purely aesthetic.

I want to make many more of these cards so it'll be an ongoing search for the right images.

Posted by phantomcardboard at 3:39 PM