Just One Of The Guys 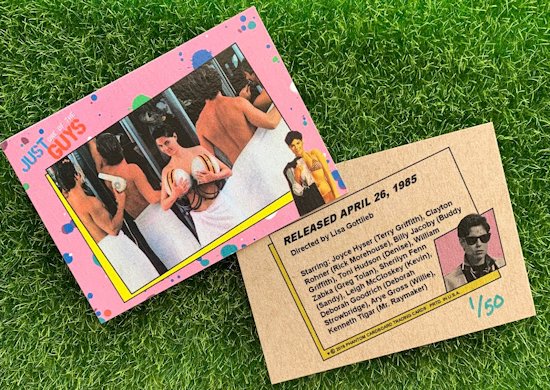 Just One of the Guys is an incredible movie that I personally feel sometimes unfairly gets overlooked because it was made in the '80s when so many other great movies came out.  Heck, in just 1985 alone -- the year the movie was released -- you had movies come out like Back To The Future, First Blood Part II, Teen Wolf, Commando, The Goonies and the list goes on-and-on.  For me though, Just One of the Guys is right up there with that list.  I can watch it anytime.  It's a charming movie that unfortunately I'm not so sure could be made in today's over-sensitive culture.  Joyce Hyser's Terry was an androgynous rock star plus Sherilyn Fenn and William Zabka are a couple of all-time favorites of mine.

As it usually goes I was inspired to do this set after a recent re-watching.  Since this movie, in my opinion, is so slept on I wanted to do something special as far as a custom card set goes.  I tried to visualize how cards would look in all of the different 1985 sport card templates from all the major companies and nothing looked in my mind like a home run.  Then, like the loser I am, I watched the movie again a couple of days later and the answer was right there in the dialogue:

Eureka!  In 1985 Topps put out a Cyndi Lauper trading card set! Perfect! I knew the pink paint splatter design would be a great throwback look for this set. 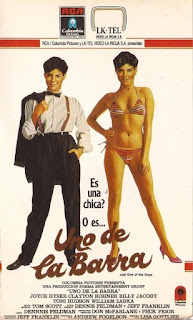 The Cyndi Lauper cards were not captioned on the front, they all just said "Cyndi Lauper" in that squiggly nameplate thingy.  I thought to use that same design for a caption would be a real pain in the ass.  So, what I did was I threw a Just One of the Guys movie logo in the upper left corner.  When I looked at that it felt like it needed something else.  The logo doesn't really pop so I decided to add something to the lower right corner to kind of even the card out for the eye.  I first thought of some sort of head shot cameo and started looking for the right image.  That's where I came across the overseas VHS cover art and got an idea to edit the image to do the half-and-half Terry you see on the cards.  I really think that's my favorite part of these cards.

Since I didn't have a caption on the front I decided to do something that has been requested but not done with my cards to this point ... each card has a unique back.  I studied a lot up on the movie so I could have a unique quote and fun fact on the reverse of each card.  I personally love that kind of nerd fanboy stuff.  That cameo head shot idea I was going to use for the front got incorporated onto the back design.  I'm not sure how often I'm going to make unique backings for future cards but, like I said, I wanted  to do something a little special for this set.

This mini-set consists of a title card plus nine cards all with unique quotes and facts on the back... plus a bonus card, shaking out to eleven total cards.

I feel like I'd be neglectful if I didn't mention something about "the scene" in which Terry proves to Rick that she is indeed a she by revealing to him a couple of the most perfect breasts in cinematic history.  For a guy like me that is probably closest maturity-wise to the ever horny younger brother Buddy, that scene is everything.  As far as breasts scenes go I put it as 1b to Phoebe Cates' 1a in Fast Times, it's that spectacular.  In researching the movie it seems Joyce Hyser is a little uneasy about the whole thing all these years later especially when it's found on the internet out of context to the movie's plot.  I get that, and as respectfully as possible I would say to her she's got nothing to feel uneasy about.  I found it interesting when I read that she's said no one has ever asked her at a signing or convention to sign that particular scene.  I don't think I'd have the fortitude myself  to try and get that signed but I'd probably be picturing it in my head while she signed one of my PG-13 cards.  Sorry, Joyce.

Posted by phantomcardboard at 2:45 PM