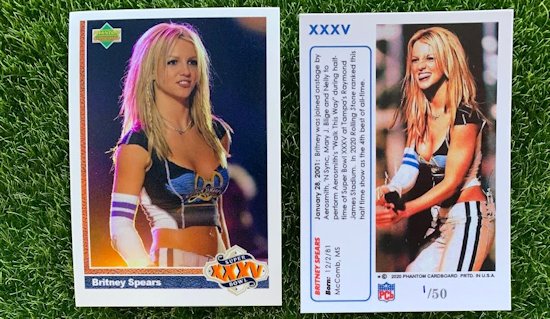 Right before Super Bowl LIV I was listening to podcast and they made a reference to an article that ranked the best halftime performances of all-time for the big game.  Ranked pretty high on that list was the 2001 show with Aersomith, Britney Spears, N' Sync, et al.  I remember that well because of how smoking hot Britney was during that performance.  Never the biggest Britney guy, but I can't deny I took notice of her at least for that show.

This card is done in the style of the 1991 Upper Deck football set, which was UD's inaugural pigskin offering.

Posted by phantomcardboard at 1:50 PM