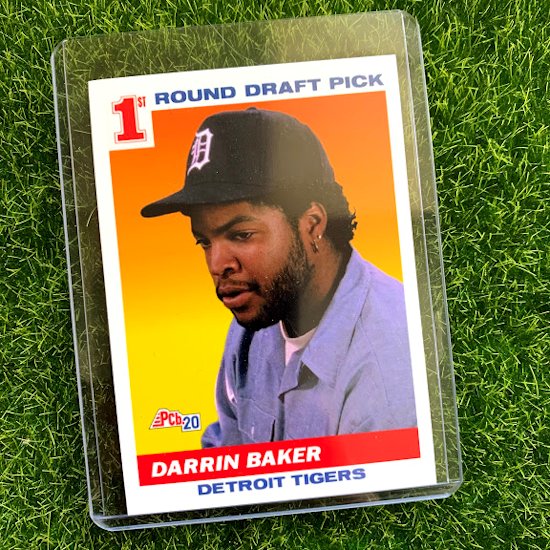 Here is the second card birthed out of my quarantine watch list.

I remember as an eleven year old kid the impactfulness of Boyz n the Hood.  This around a time where urban culture was really gaining steam in becoming popular culture.  Up until that point most of it was fun Kid 'n Play type stuff, but director John Singleton's Boyz n the Hood was a more raw look into gang culture.  It certainly wasn't the first movie to venture there, but it is, in my mind, the best and most significant.

I popped in this VHS and watched this movie for the first time in a long time.  The movie has held up and still worthy of all the praise it gets.  It's not just for the story the movie tells, but the cinematic excellence for which it was told.  Boyz n the Hood has a masterful aesthetic appeal and the acting put names like Cuba Gooding, Jr., Lawrence Fishburne, Ice Cube and Nia Long on the map.

While watching I couldn't ignore the Old English D on "Doughboy's" Tigers' cap that Cube wore throughout the movie.  I'm sure I noticed it as a kid from the metro Detroit area, but it has a new significance now that I've been channeling my creative angst into retro inspired trading cards.  Now it's like of course there needs to be a Darrin "Doughboy" Baker Detroit Tigers baseball card!

In 1991 when Boyz n the Hood came out there was a must have baseball card that would be sure to make you a rich man in the future... the '91 Score Chipper Jones #1 Draft Pick card.  Like I've stated in the past about the 1991 Score set, it's a pretty forgettable looking base card, but the subsets are some of the best ever in my opinion.  I remembering pulling the Chipper Jones from a pack and really liking the looking of the card.  The sunset looking orange-to-yellow gradient fade gives the card a sweltering look, perfect for a "hot" rookie card.

As a side note, if you're familiar with the '91 score set the "Rifleman" or "Master Blaster" subsets might come to mind as a missed opportunity for this card.  But, I went with #1 Draft Pick inspired template for two reasons; for one, because of the Chipper Jones card it's just way more iconic and two there wasn't really any great images of Doughboy with his piece to complete the tongue-in-cheek reference the card would be making. 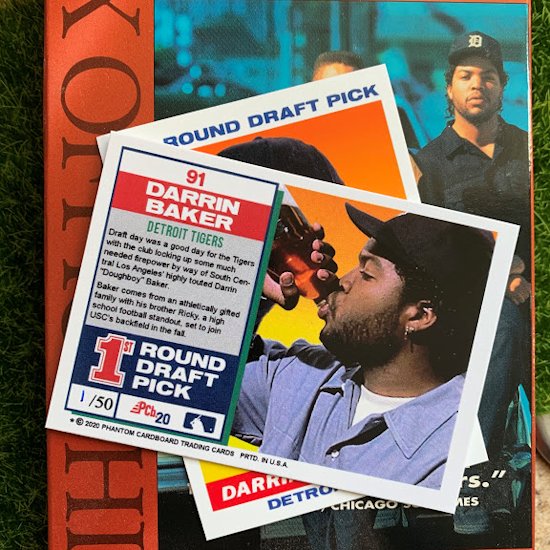 Posted by phantomcardboard at 7:37 AM