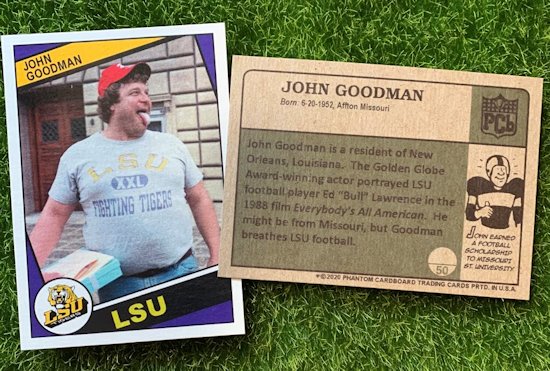 This image is a pretty internet famous image, but it's usually the photoshopped version of it where John is wearing a Black Flag band shirt.  I figured the original image where Goodman is wearing a shirt of his beloved LSU Fighting Tigers would make for a pretty fun card because who isn't a John Goodman fan?  He's been a lot of great stuff which includes several sports-themed roles.

I'm not 100% sure what year the image was taken but I'm fairly sure it's from the '80s.  Usually, I'm a stickler researching so I can match the year to the card design but I knew from the outset that I only wanted to put the image in a 1984 Topps football inspired design.  It's the only football design from the 80's that incorporates a logo (not counting the on-helmet logos '82 & '88 designs), and I really wanted to use the logo LSU used as their primary logo throughout the 1980s.  That logo, to me, looks so generic and dated, therefore it has the type of charm I dig.

I've used the '84 design quite a few times in the past but this is the first time I added a card back.  I was unfamiliar with the back of these cards.  I had to check several sources to make sure I was indeed looking at the back of the right cards because it looks so dated, even more so than 1984.  It looks more like it would befit a football card from the 1970s, or even older.

Posted by phantomcardboard at 10:32 AM