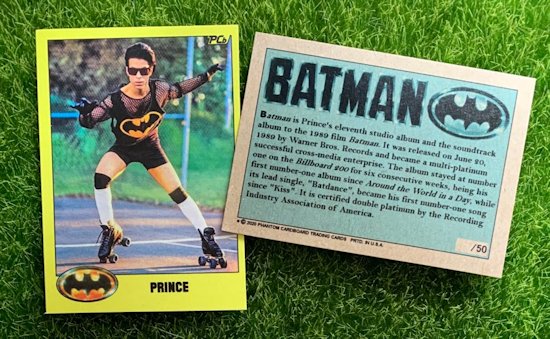 This image of Prince rollerskating with a 1989 Batman logo tank top on was too good not to become a custom card.

The summer of 1989 was aptly dubbed "The Summer of Batman".  I don't recall a movie more hyped (although Titanic was close) than Tim Burton's 1989 Batman film, and this is decades before the superhero movie craze.  The movie lived up to the hype.  Michael Keaton and Jack Nicholson were both brilliant and helped make Batman the hottest property on the planet.

For those who maybe don't know or don't remember, the entire Batman soundtrack was done by Prince.  The album was #1 on the Billboard 200 for six consecutive weeks and helped give Prince's career a commercial revival.

I was eager to finally use a 1989 Topps Batman inspired design.  I was one of the millions of kids who wanted anything they were slapping a Batman logo on, especially trading cards.  The movie was big enough to support a series one and two card set.  Series One had a white border, and is probably the more recognizable of the two series.  I chose, however, to use the yellow frame of the second series as it was more of a behind-the-scenes card series, which this card would fit in better with.

Posted by phantomcardboard at 8:41 AM