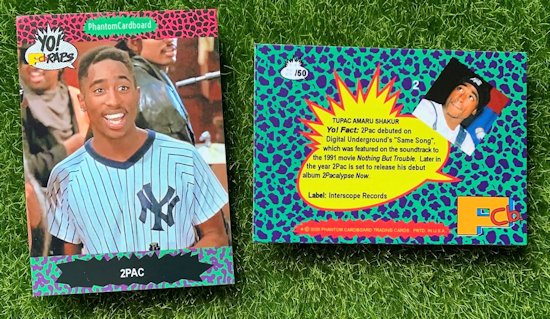 Tupac had a rather meteoric rise to superstardom before his untimely murder, but in 1991 when ProSet released their Yo! MTV Raps rapper trading card set, Tupac was still a relative new-comer to most of the established artists in the set.  This card has a little fun imagining "what if" Tupac had made it into that card set.

In 1991 Tupac --then going by the stage name 2Pac-- was a roadie/back-up dancer in the rap group Digital Underground.  He had a cameo with the group in the movie Nothing But Trouble performing the song "Same Song", which also was featured on the film's soundtrack.  Later that year Tupac released his debut album 2Pacalypse Now.

Posted by phantomcardboard at 9:11 AM