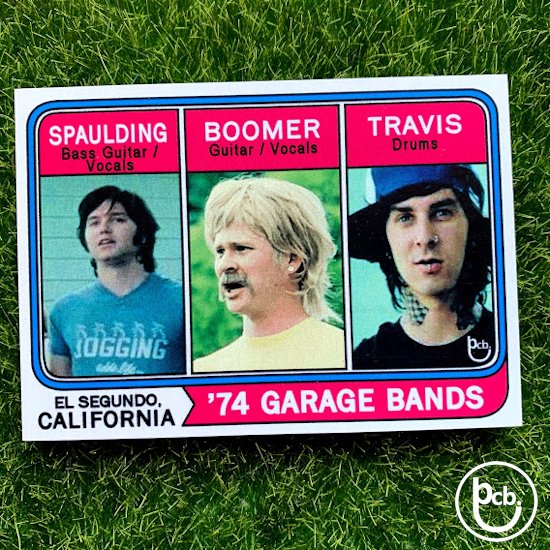 I'm not sure why, but one day I got on a binge watch of late '90s into early '00s alternative rock videos.  Music, for me, has always been a way to bookmark years.  Most times, almost a little Rain Man-ish, I can tell you the exact year a song came out.  The songs I was listening to took me back to my late teens and early 20's.  I guess I do the same thing with cards but that stops around the mid '90s because that's when I stopped collecting, so I'm unable to connect a card design to a year.  Music gives me a broader timeline in which to recall the who/what/whens of my life.
One video I've always liked was Blink-182's "First Date" off of their 2001 Take Off Your Pants and Jacket.  Actually, I like the video but I don't much care for the song.  I like that video because it's funny.  I always like videos that have 'rock stars' who aren't taking themselves super serious.  Set in 1974, Blink plays this sort of immature slacker El Segundo, CA garage band.  The concept stemmed from Tom DeLonge's (whom also "Fist Date") reaction to an over-the-top Bee Gees documentary where he recounted them "on top of a mountain, singing face to face, with the sunset behind them".
I thought it would be funny to make a card from this video with a 1974 Topps baseball inspired design.  I did a mash-up of a horizontal base card and a multi-play rookies card.
The information on the back came from the end of video where they did a Fast Times at Ridgemont High style still frame of each member catching you up on what they've been up to since the events of the video.  There's three characters in the video, but obviously DeLonge's "Boomer" is the star.  A  random thought though... DeLonge was "Boomer", Mark Hoppus was "Spaulding" but Travis Barker is just..."Travis"? 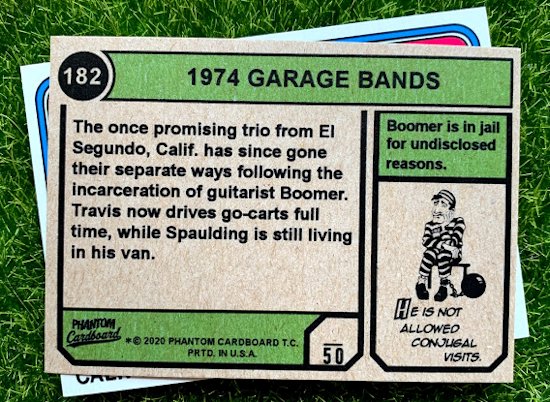 Posted by phantomcardboard at 5:23 AM