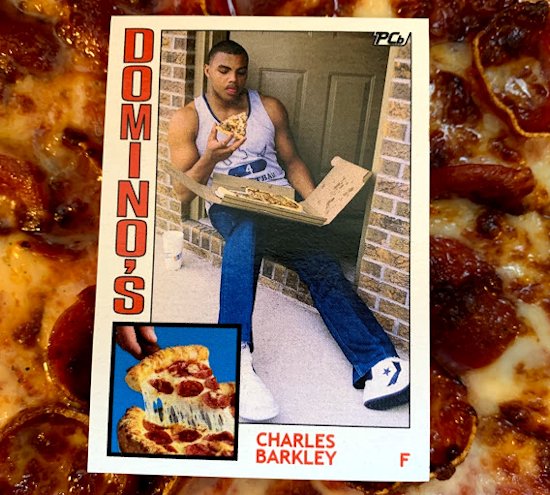 First off, I like Charles Barkley.  He's a huge personality.  I like that he speaks his mind.  I don't always agree with his views but I appreciate that he doesn't just parrot populous sound bites.  That's so rare these days with those in the public eye fearing the loss of their entertainment industry club card.  Plus, he may be one of the few people that's worse at golf than I am.

There's this infamous image of Charles Barkley thoroughly enjoying a Domino's pizza -we know it's Domino's because of the drink cup at his side.  I wanted to make a card out of this image, but I just couldn't figure out an angle for the card.  I was hoping to think of something more than the image just plugged into a random card template because, to the best of my knowledge, there weren't any pizza themed card sets in 1984.

Then I thought of a way to make it make sense.  I'll just conceptualize a backstory for the card!  Okay, so follow along here.  Charles played college ball at 300 lbs.  The 76ers, who had the 5th overall pick in the 1984 draft, were planning on using their pick on Barkley if, as they told him, he could trim down to 285 lbs. before the draft.  Charles was able to get down to 283 lbs. and that's when his agent, Lance Luchnick, informed him that due to the league's hard salary cap back then the Sixers only had $75,000 a year to pay Barkley.  Obviously that was news to Charles as he recalls telling his agent:

So, Charles spends the next 48 hours eating as much food as possibly could to prevent Philadelphia from drafting him.  Charles managed to balloon to 302 lbs. in just two days, but the kicker was that the 76ers drafted him anyways.  *Whaa-whaaaaa*

Here's where my card concept kicks in ...

Domino's has seen the pictures of Charles lustfully consuming their product.  When he turns pro in '84 they approach him with an lucrative endorsement deal.  Charles, still gripping over the thought of a paltry rookie contract with the Sixers, jumps at the chance to shill corporate pepperoni and cheese.  Now with Sir. Charles as the face of  "Team Domino's" the promotional marketing gears start to turn.  First up was a special collector's card offered as a purchase premium that was wildly popular and much more profitable than actually giving money off of pizza purchases! 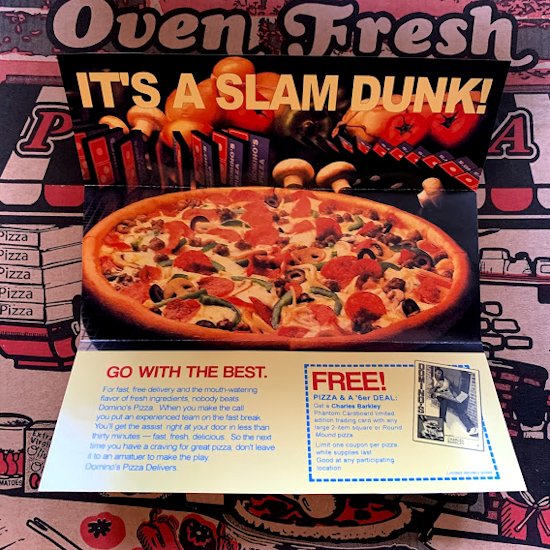 As it turned out Philly loosened the purse strings and ended up giving Barkley a four-year, $2 million contract one month later, including a $150,000 signing bonus (that's actually true).  Barkley now has so much bank he has no need for his pizza money and stops taking Domino's calls for restaurant grand opening ribbon cutting ceremonies, leaving the trading card promotion as the only link between Barkley and the pizza chain's partnership as Barkley's lawyers were able to get him out of his Domino's contract due to an unusual loophole on the part of Domino's legal team.  The contract was not signed within 30 minutes or less making it null and void as per company policy.

Domino's was in shambles for a couple of years following "The Barkley Debacle" (as it came to be known in corporate pizza circles) until "The Noid" was concocted in 1986 allowing the Domino's franchise owners to once again hold their heads high at family gatherings and social functions.

There.  Now the card has an interesting backstory.

Since the picture is from 1984 I went back to the '84 Topps baseball inspired well.  I've been on a bit of a roll with this design between the André the Giant card and the Revenge of the Nerds set.  In the same spirit of the André card, instead of using a headshot in the designated inset square I went with a cheesy (pun so intended) stock pizza image.  I thought that would be humorous. 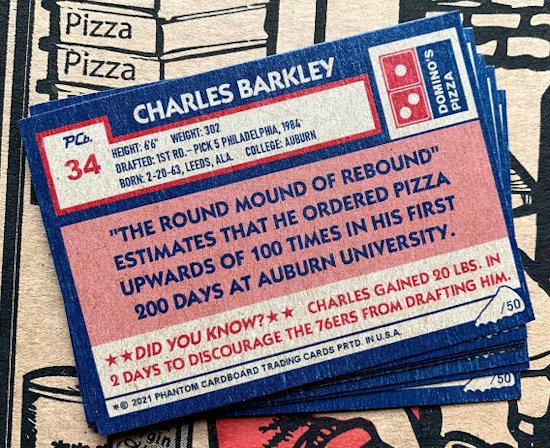 While I made up a story for the front of this card, the info on the reverse side is all true.

Posted by phantomcardboard at 8:48 AM