Revenge Of The Nerds 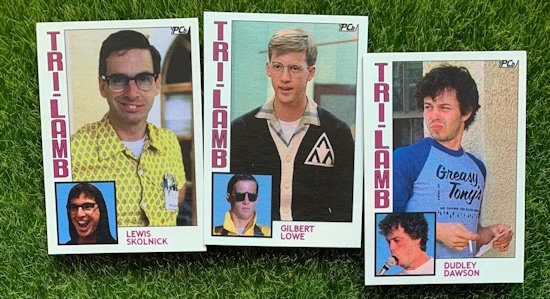 Revenge of the Nerds is a movie that a lot of us loved, but maybe hasn't aged so well.  There's the cultural stereotypes, the "toxic masculinity" from the bullying Alpha Betas and that problematic err-ummm love scene? between Betty and Lewis on the moonwalk.  But, my '80s kid eyes prefer not to view it as the un-P.C. cluster-bleep it would be by todays standards, but as the underdog sex-comedy it was before our childhood's became so cancellable. 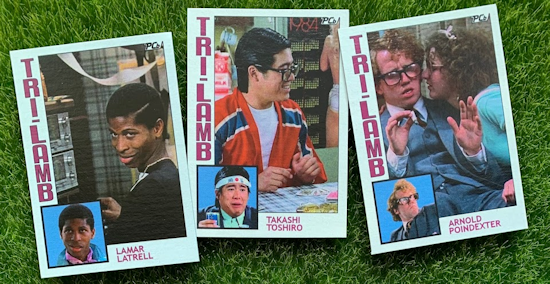 This is a set I've had the back burner for a long time now.  If you're new to the site I started making custom cards in hopes of sending them off in the mail for autographs 6 or so years ago.  I had made 5 or 6 cards from this movie with no intention of making a mini-set out of it.  Those were just the cards I thought I might stand a halfway decent chance of getting autographs on.  There's a lot of cards from my earlier days that I'd like to expand to a set.  Picture and industrial sized stove with back burners as far as the eye can see, something like that. 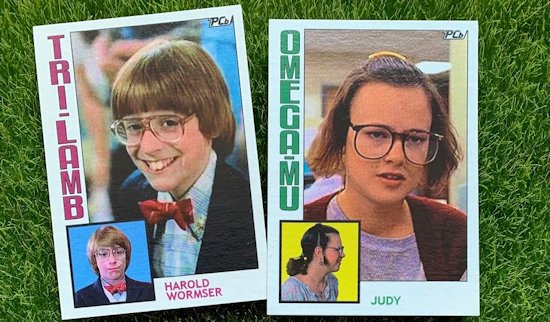 I finally decided to buckle down and put this baby to bed.  The cards I had made previously were tightened up since I've got new operating standards that I didn't have then.  I just needed to fill in the blanks character-wise and then design a card back to what ended up being a 14 card mini-set. 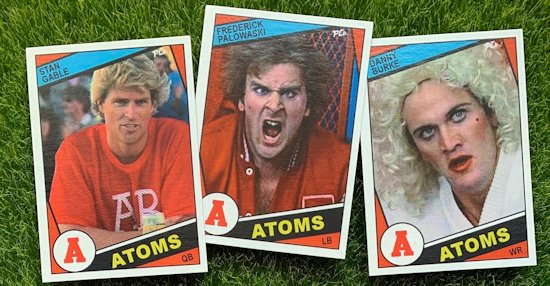 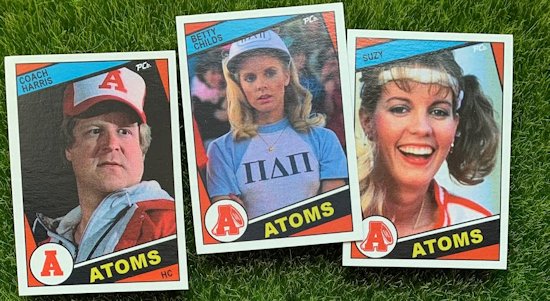 The cards all got the same card back design to give the set more continuity since the card fronts varied between the heroes and antagonists.  The back design is derivative mostly to '84 Topps baseball set but with some liberties taken to give them the right amount of nerd flare.

I had a lot of fun packing the card backs with info.  Each card has a "Transcript" section which basically serves as a listing of some of the character's prominent characteristics. Each character also has a quote attributed to them and their frat/sorority affiliation.  There's a "Nerd Factoid" on each just because I'm into that DYK? kind of shit.  The card back finishes off with quiz question so you can test your RotN fanhood. 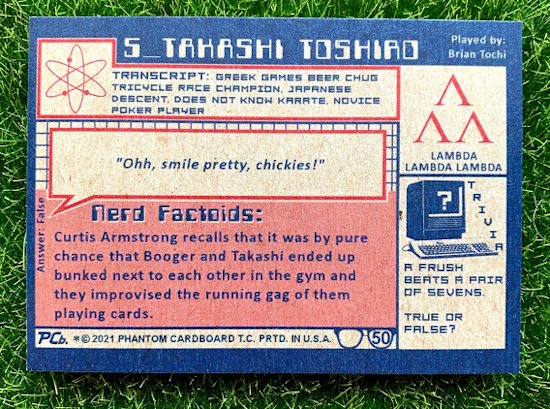 A number of the sets I've made recently somewhat storyboard a movie so I like to keep those cards together and not offer them with the PCb. card shop's "You Pick Single" option.  This one (all though I would prefer collector's get the entire 14 card set) because they're all character cards and I get that there's some that just might want certain characters, so I'm leaving it open to the Y.P.S. option.  But, as an incentive, I've created a bonus card *only* available with the purchase of the complete set.

Not that I wanted to highlight the sorta rapey love scene, but it's just that the card makes tons of sense.  What I mean is Lewis was wearing some sort of Storm Trooper/gorilla/Darth Vader hybrid costume and the 1977 Star Wars set is so iconic, and not to mention how the Star Wars franchise is known for their almost cult-like nerd fanboy following.  It just all comes together too perfectly not to make the card.  And hey, *spoiler alert* Lewis and Betty end up married in the sequels so it's sort of  the beginning of a meant-to-be nearly consensual love story!

Posted by phantomcardboard at 6:47 AM