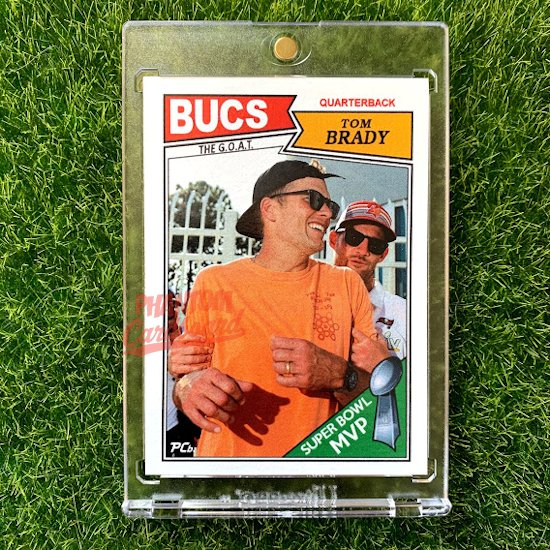 In terms of internet timing, I'm way late on this card, but I had a few other things to get done before I was able to complete this one.

I've been a fan of Tom Brady since his days at the University of Michigan.  I remember complaining about him having to split time with Drew Henson.  I thought Brady was the better of the two quarterbacks, but Henson was hyped to the moon, and unfortunately for U of M, he didn't quite pan out- opting to pursue baseball.  This was back when being a Michigan fan wasn't something shameful.

When Drew Bledsoe got injured and Tom took over at QB for New England it was perfect timing for me as my disgust for the Detroit Lions organization had peaked and I was ready to swear off any allegiance for good.  I'm not claiming I thought Tom Brady would turn out to be the greatest of all time, or even good for that matter, but it gave me a reason to be hopeful, which I hadn't had for a few years to that point following Barry Sanders' abrupt retirement.  Lo and behold Tom led the Pats to the Super Bowl that very season and eight more times in New England.  As a fan I'd say I hit the jackpot.

When Tom signed with the Buccaneers in the offseason I hoped he'd do well but I didn't think he, at 43, would be leading them to the big one.  I expected they would be a respectable football team.  I wanted those who claimed Brady was a "system quarterback" to shut their big yappers.  But, I cannot claim I expected a Super Bowl birth.

On top of everything else the Bucs were the first team to play on their home field in a Super Bowl!  That's something, looking back, I'm really glad that happened as it was definitely an edge for the Bucs.  The only downside to rooting for Brady and the Pats is they never won in the trouncing fashion as these Bucs did over K.C.  Every Super Bowl win was a down-to-the-wire nail biting affair.  I hated that stomach-in-knots, not over over until the final play type of game.  I guess it would be great if there wasn't the vested interest, but I wasn't a casual fan.  I was always all-in.

Maybe just as satisfying as Tom getting his SEVENTH Super Bowl ring was him being completely sloshed during the victory parade.  That's a side of Tom Brady that has never been seen before.  A large part of his greatness comes from his 365 day discipline to his regimen.  So, to see him let up a bit and show that, as most were saying, he's "human" after all was pretty cool.

If you've made it this far than you get I'm a Tom Brady fan.  But, I've never even considered making a Tom Brady card to this point.  It wouldn't really fit with the cards I make just to do a straight forward football card.  There's plenty of Tom Brady cards out there so I wouldn't, in my mind, be adding something for a collector.  Although the designs I use are mostly sports card designs, the overwhelming majority of cards I've done with actual professional athletes have a tinge of humor to them.  Tom Brady being so drunk he needed assistance walking in a straight line provided the perfect tinge to add a PCb. card of The G.O.A.T. to the universe.

I think it's easy to see I have an affinity for card designs from the heart of the junk wax era, the 1980s.  I started shuffling in my mind how this Tom Brady card would look inside of the various football sets that Topps put out in the '80s.  I chose to go with a design inspired by Topps' 1987 design.  For whatever reason I think it's my favorite football design from the '80s, plus it's significant since Tom has been in the league for practically that long.  I was eager to use the colors from the Buccaneers creamsicle days.  Even though those teams pretty much all sucked, I loved those uniforms.  Red and orange are actually two of my favorite colors.

In the area where Topps would designate a player as a "Topps All Pro" I took the opportunity to give Brady a G.O.A.T. call out.  The Super Bowl MVP highlight in the lower right is just something I was playing around with that I thought looked cool so I went with it.  Trophies on cards have always been big for me since the days of getting excited over the "All-Star Rookie" trophy on Topps baseball cards. 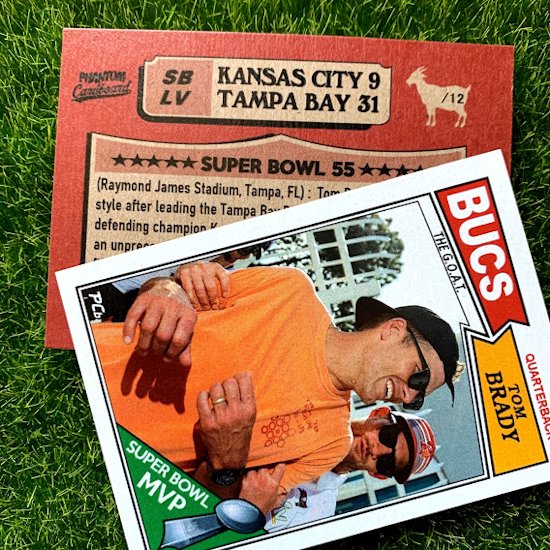 I wanted to make the back have more of a special tribute card feel rather than a statistical style back look.  I recycled the back I created for the Over The Top card.  My other cards all get print runs of 50 where as this one is limited to only 12 in tribute to Brady and I wanted to hopefully be out of this card before the hype of the next NFL season sets in.

Posted by phantomcardboard at 8:00 AM