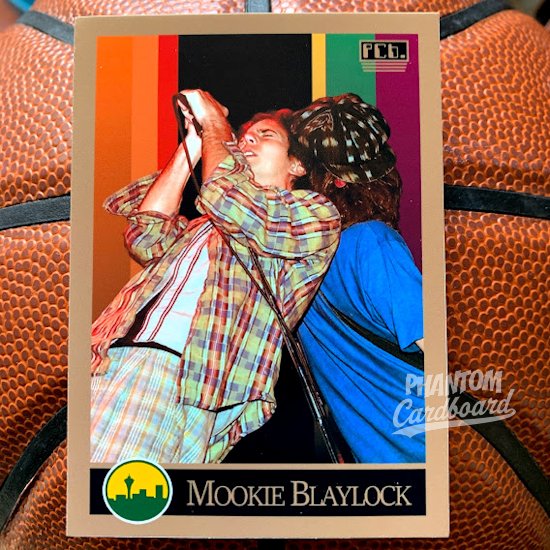 I think it's pretty well known fun fact amongst fans of Pearl Jam that the band briefly went by the name Mookie Blaylock after the NBA guard.  They played a 10-show tour with Alice In Chains under the name before changing it in early 1991.

There's different stories out there about how they ended up with the name Mookie Blaylock, but I'm inclined to go with the story guitarist Jeff Ament gave -that involved basketball cards- to The Missoulan in 2008:

"When we were recording our first record, we had a per diem of about $10. So when we got lunch at the store across the street, we'd always buy a pack of basketball cards. When we turned in our tape, we didn't have a name for the band yet so we put a Mookie Blaylock card in the case. We were about to go on a tour and still didn't have a name and needed one quickly. We were told it didn't need to be the name that we were going to use forever, just something for the tour. Someone saw the Mookie Blaylock card and said, ‘How about Mookie Blaylock?' We decided to go with it and did a 10-show tour with Alice in Chains as Mookie Blaylock. Mookie was cool about it, too—he didn't sue us. I actually got to meet him later on and shoot around a little bit. We also made a Pearl Jam T-shirt with a picture of him on it. I guess we owe Mookie a lot."

I read that it was revealed on Bill Simmons' podcast that the card that was the inspiration was actually the the 1991-92 Skybox, where I chose the 1990-91 design.  The reason being is finding quality images from that period was, well, they probably didn't know that one day some guy would want to make a custom basketball card and needed quality pics to do so.  Let's just say that.  I really like the image of Vedder and Ament on this card, but it didn't work well in my opinion with the 1991-92 design, but I thought it looked stellar inside of the 1990-91 confines.

UPDATE: I believe I've determined that the card that was the inspiration for the band originally being called Mookie Blaylock actually could not have been the 1991-92 Skybox.  On 3/10/91 the band went on Seattle's KISW and formally announced the name Pearl Jam.  The 1991-92 Skybox was not even out at that time, let alone months before when they started calling themselves Mookie Blaylock.

There's stories that Mookie Blaylock (the person) threatened to sue over the unauthorized use of his name, but I've also read that that may not be true.  What is true though is that for Mookie it's better that he be a trivia question to the history of one of the most successful rock bands ever than to have totally lost his individualism had they kept his name.  Of course we didn't know then how we'd access information and media these days wit the internet, but imagine Mookie wanting to show his kids or nieces/nephews his highlights and having to sift through all the Pearl Jam stuff.  It would totally suck.

I've read that Pearl Jam's first album being named Ten was a nod to Mookie Blaylock being that it was his jersey number.  So, I gave this card the #10 as an Easter egg to that.  In the space where the team logo is on the front of the card I created a modified version of the Super Sonics logo that was in use in 1991 with the Seattle skyline, with Pearl Jam being synonymous to Seattle's grunge rock scene that exploded onto popular culture in the early '90s.

Personal Fun Fact: Every once in awhile when I'm feeling the prod of life's existential ponderings I end up listening to Pearl Jam for three or four days in a row.

I just want to scream HELLOOO!
My God it's been so long
Never dreamed you'd return
But now here you are and here I am.

Personal Fun Fact #2: The best dog I ever had was named Mookie. 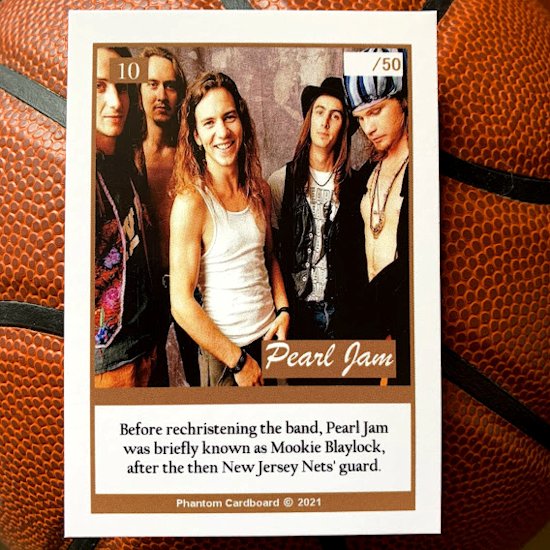