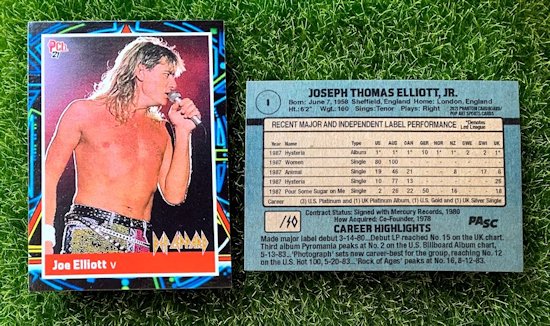 When I started making custom cards for my own personal amusement 6 years ago I didn't really know if it was "a thing" and if there were others like me putzing around with it as well.  Fast forward to now and there's a number of creative types I see online adding different flavors to the custom trading card stew.

I particularly appreciate those that are making their own lane and making cards that speak to their particular interests.  One of my favorites is Joe who creates his Pop Art Sports Cards --formally Big Number 59.  I find Joe has a similar approach to me in the way that he truly cares about the details in the cards he makes.  You can tell he too has a deep appreciation for vintage card designs that is equaled by his passion for music.  We share an enthusiasm for matching a card's subject image accurately to a trading card design from the same time frame.  Where my cards are usually lined with humor, Joe takes chronicling musical acts and telling their story meticulously through cards very seriously.

My favorite part of his card is the ingenious way he transforms a card back's statistical form into a musician's record of chart performance.  I think that's an awesome touch!

Awhile back I purchased a Def Leppard VHS tape called Historia.  It basically takes you on a music video tour through the band's first 4 albums.  The tape from front to back is a banger-- head banger that is.  Whether you consider them hair metal, pop rock or anything in between, Def Leppard made some of the greatest rock music of the decade.  We've actually near worn this tape out.  Even though I love the videos it's more so my son.  He's on the spectrum and when he likes something he tends to like it in a back-to-back-to-back-to-back-to-back-to-back fashion.  Suffice to say he likes Def Leppard.

All those times of the tape playing either in front of me or in the background as I'm doing other stuff and he's enjoying the hell out of it got me to remembering how much I loved Def Lepp as a kid.  Def Leppard was my older cousin's favorite.  When you're a young kid that didn't have an older sibling an older cousin can be pretty God-like.  So, of course I had to love Def Leppard if the cousin that I idolized was into them!

I'm pretty sure I've mentioned in a posting in the past that 1988 was my favorite year as a kid.  I don't know why but 1988 seemed like it spanned 3 years.  Everything particular to that year seems so vivid and the best.  I don't know if it was my coming-of-age year or what.  My Pistons were GREAT and *should have* been the world champs.  My collecting of baseball cards was at it's purest point for  opening packs and wide eyedly shuffling through them in hopes of a Tiger or superstar.  And then there are a few songs that are just burnt in my memory as anthems for that year.  "Pour Some Sugar on Me" is certainly right at the top of the heap.  The video might be THE 1988 video for me.  That video (the American version) with it being comprised of concert footage, provided a visual to me of the energy of live rock 'n' roll music.

Def Leppard, all-in-all, was a band packaged with killer visuals.  Both in their music videos and album art.  They always had some of the more intriguing album cover art to me.  It invoked feelings that ranged from provocative pop-art to a digital video game like aesthetic. 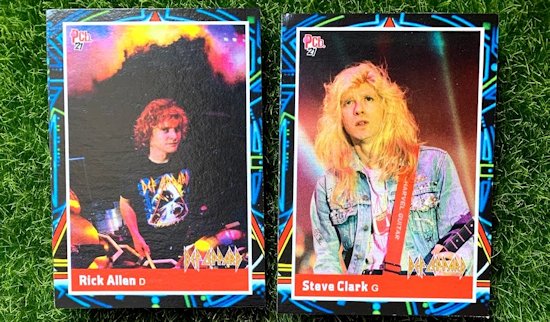 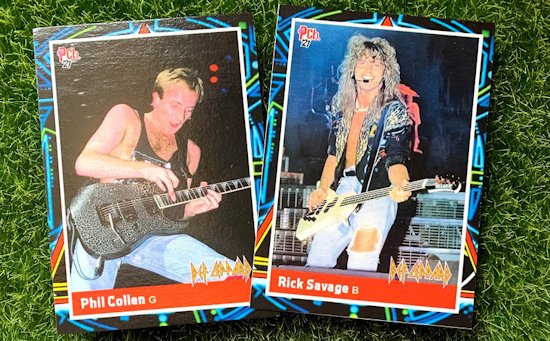 Whenever I'm indulging in nostalgia these days my mind automatically is trying to find a trading card angle.  Remembering 1988 to me is to remember Donruss' abstract baseball card border.  Today I view it as mad charming, but I'll say it probably confused my eye back then not knowing what I was supposed to be seeing.  Remembering this lead me to thinking about the Hysteria cover art.  I was always been turned on by this album's cover art.  To me it felt like there was a lot going on it that space and a lot to take in.  The sort of thing that you could just stare at and try to reconcile an interpretation for yourself.

I got to thinking that the color pallets for both the album and the 1988 Donruss shared similarities.  I believed I could swap the pipes (or whatever they are) for Hysteria's sort of sci-fi neon light grid and not lose the spirit of the original cards, which is what I did, and I think that holds true.

After the border was done the rest of the front of the card was pretty straight forward.  Then I got to thinking about the back and how much I'd like to emulate what Joe from PASC does with his card backs.  I got to thinking why not see if I could bring him in on the project?  I had a concept in mind where, if he chose to, he could go half on the design and use them in his collection too.  My editions would have a PCb. logo on the front and his could have a PASC logo on the front and we could share the credit line on the back.  I pictured it being like a Topps/O-Pee-Cee partnership, or better yet Donruss/Leaf where these cards are concerned.  I'm happy to say Joe was down to collaborate and I think we turned out a pretty cool card set that played to both of our strengths.

Posted by phantomcardboard at 9:58 AM