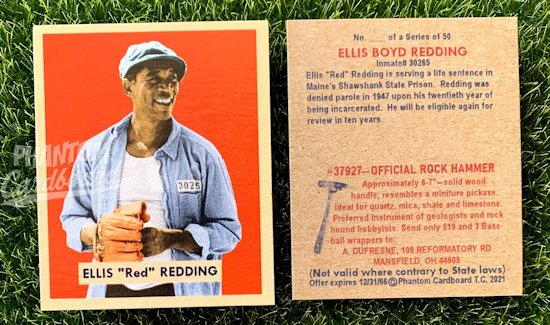 I don't feel as if I have to spend too much time in this post waxing poetic about how good of a movie The Shawshank Redemption is. Tim Robbins and Morgan Freeman both gave brilliant performances in a movie that was nominated for seven Academy Awards. In the time since the movie's 1994 release The Shawshank Redemption has gone on to be considered one of the greatest movies ever made.

It's kind of a fluke how this card came to be.  In 2018 I made a few card featuring film characters that used baseball bats, but not necessarily for playing baseball (see this, this, this and this).  There was a card I wanted to make in this theme but never could find an image good enough to use for the card; that character being Morgan Freeman as the tough baseball bat wielding principal Joe Clark in 1989's Lean On Me.  I'd still like to make that card so every now and again I'll do an image search from the movie looking for something I can make into a custom baseball card.  Most recently while searching a number of different baseball related keywords brought me to screen captures of Morgan Freeman playing catch in the prison yard towards the beginning of The Shawshank Redemption where Red has his first interaction with Andy Dufresne.  I guess sometimes the custom card inspiration just finds you?

The Shawshank Redemption starts off in 1947 and goes on to span several decades.  I started off looking at what baseball cards were out in 1947.  (For reference, Topps didn't start producing baseball cards until 1951.)   There's not much to choose from as little was produced due to wartime restrictions on ink, cardboard and many supplies needed to make gum.

There's the 1947 Exhibit set made by the Exhibit Supply Co. of Chicago.  As far as for making a custom card there's not too much to go on with the '47 Exhibits.  They're black and white photos with blank backs.

Next I took a look the 1948 Bowman set.  This was the first year Bowman got into cards, producing sets for baseball, football and basketball.  But, like the Exhibits, they're not much to design around.  Black and white photos on 2 1/16 x 2 1/2 pieces of cardboard.

The next year Bowman started to spice things up.  The cards again 2 1/16 x 2 1/2, but this time the black and white images had the players uniforms colorized against solid color backgrounds.  The early numbered cards in the series did not feature the player's name on front until Bowman added them starting at card #109.  It should be noted that Leaf also produced a similar looking set of cards with a little more flair at the bottom with a bold black (or sometimes red) block for the player's name that are dated 1948-49.  I chose Bowman just because the name itself is a little more iconic to me personally. 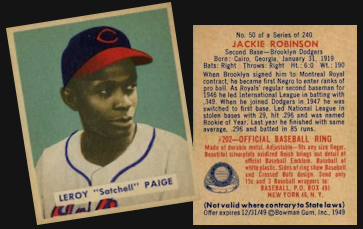 I think pairing the design to this movie makes great sense as the The Shawshank Redemption is significant the motion picture industry for it's impact and the same could be said about the 1949 Bowman to the trading card world.

This card front took a little more work.  Usually it's the card's template design that takes all the work and then it's just popping in the picture.  The template for 1949 Bowman is really just a rectangle frame.  For this card front I needed to crop Red from the background, age the image and then go back and recolor it.

The back of the '49 Bowman featured biographical information at the top and and advertisement for a baseball related product on the lower half of the card. As you can see, this is where the real fun began.

The top portion is some basic information about the "Red" character's time in Shawshank up to this point in time.  The bottom sales ad portion is where I was able to work in a number of Easter eggs from the movie.

Posted by phantomcardboard at 11:23 AM