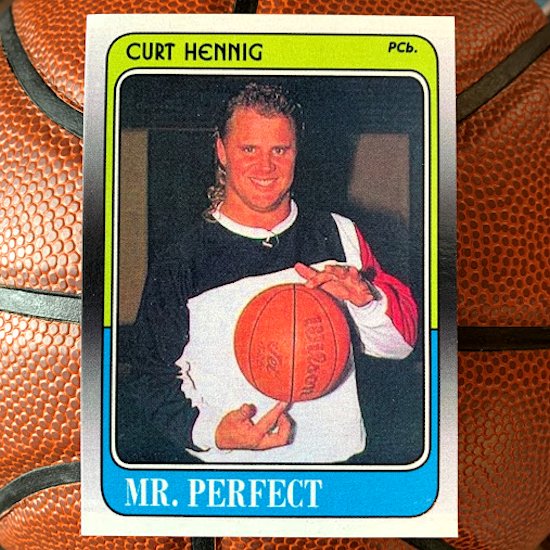 I found out through some research when making this card that Curt Hennig actually had a run with the WWF in 1981 through 1983.  I was too young to have known about him then.  But, by the time he returned in 1988 I was full blown obsessed with wrestling.  Back then my whole week revolved around Sunday -I believe it was- when Superstars of Wrestling would come on right after Pee-Wee's Playhouse.  And, by the same token, my whole week would be ruined every so often when it was preempted for something else.  I didn't care that most of the superstars were just wrestling blue Speedo jobbers.  It was still pro-wrestling, and I loved pro-wrestling.  "Hulkamaniac" was the religion with which I identified.  *Please note the past tense of love because you simply couldn't pay me to watch it these days.

The WWF did a masterful job building up anticipation for Mr. Perfect with a series of vignettes showing Mr. Perfect as the perfect athletic specimen in any sport he chose to partake in.  Whether it was catching a touchdown pass that he himself threw or bowling the perfect game... everything Curt did was "absolutely perfect".  They say the best wrestling gimmicks are an amplification of the wrestlers personality, which is why the "Mr. Perfect" such a great fit for Curt Hennig because it's said that he really was a hell of an athlete.  Even though Mr. Perfect was a heel wrestler, you had to love him because he was so damn entertaining.  He was a completely sound technician, but I think my favorite part is how he sold for his opponent.  He could wrestle circles around anyone, but also make them look like a world beater.  I don't think anyone sells anything in wrestling these days.  They just get back up and continue their overly-choreographed acrobatics.

And, if you're wondering, yes... I was one of those kids that would try to slap my gum after spitting it out because of Mr. Perfect.  Unfortunately Curt Hennig is one the scores of pro-wrestling legends from my childhood who is no longer with us, passing away at only 44 years old.

I saw this photo of Curt holding a basketball, so of course I knew I had to get right on a custom basketball card.  I can only assume the picture is from one of those famed vignettes.

The template was easy to choose because there was only one widely distributed basketball card in 1988, which was the 1988-89 Fleer set. 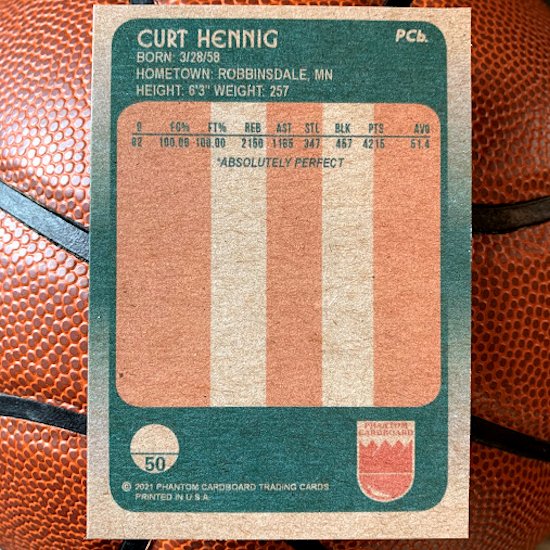 For the border I chose two colors inspired by one of Mr. Perfect's signature singlets.  I had some fun with the back of the card.  It's Mr. Perfect, so of course he didn't miss a field goal attempt nor a free throw.  In the other statistical categories I gave Curt exactly one more in each category than what is the single season record.  Absolutely perfect.

Posted by phantomcardboard at 8:08 AM