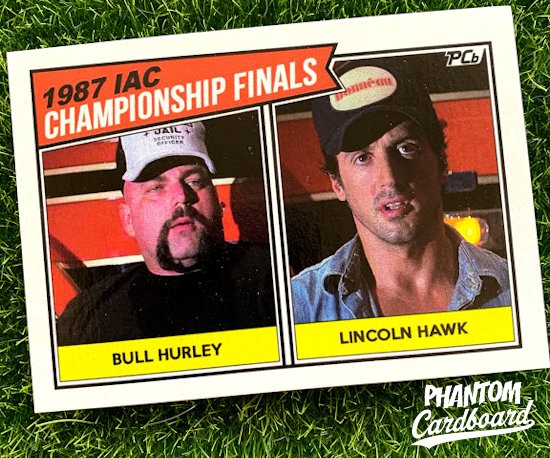 It seems like I do not go all that long before making another Sylvester Stallone card.  If it isn't obvious, he's definitely a favorite of mine.  Over the Top is one that's been on my radar for a little while but I couldn't figure out how I wanted to play it.  That changed upon running across a 1987 Topps football season leader card.

When the movie gets to the tournament there's an interesting cast of characters, almost like an 80's pro wrestling roster.  I thought about doing a mini-set like I did for Bloodsport and trying to get each of those a guys a card but ultimately I thought I'd be better served to put my energy into making one really cool card of Lincoln Hawk and Bull Hurley.  Plus, I really dig making cards with multiple persons on them.

I rewatched the movie, specifically the arm wrestling tournament portion, a number of times so I could really solidify the card's back.  A lot of the same verbiage and details from the movie made it onto the card back.  I numbered the card 213 as an Easter egg to Over the Top's February 13, 1987 release date.

On a side note, this movie has a really cool soundtrack.  Does anyone know how Kenny Loggins is not the richest man in the music industry off of residuals alone? 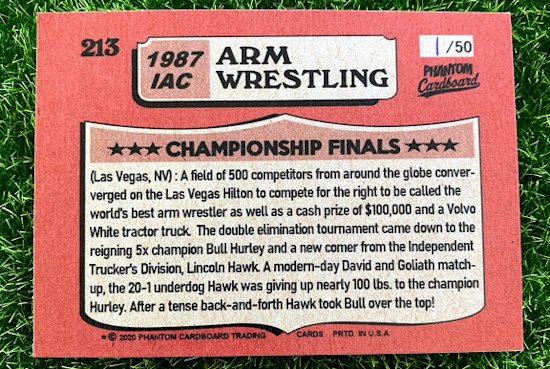 Posted by phantomcardboard at 6:44 AM