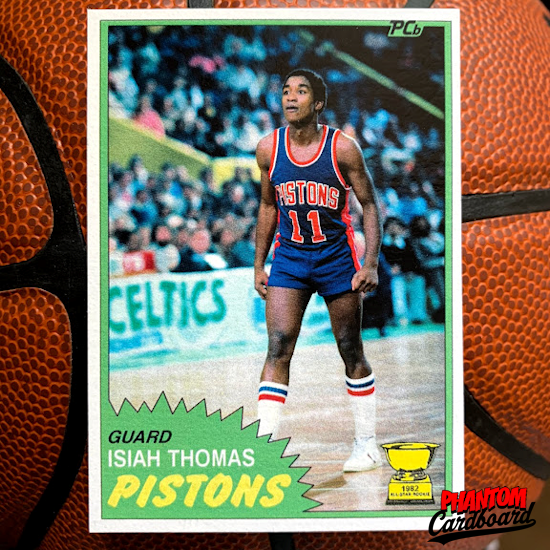 This card is a bit of a break from my usual shtick.  Not so much of a pop-culture fun card, but a sports card that never was.

If I had a time machine I would of course go back and win a huge lotto.  Part of my winnings would go to seeing that Topps never stopped making basketball cards after their 1981-82 set.  If I'm not mistaken they did so because the interest just wasn't there for basketball cards at the time.  But, looking beck they pretty much missed out on the golden era of the NBA... the 1980's.  After 1981-82 there weren't any major brand basketball cards until Star acquired the license in 1983.  But, Star was not on the scale as companies like Topps, Fleer and Donruss.  They didn't distribute in the traditional manner with boxes of wax packs.  Their cards were in team bags and sold through dealers and at arenas.  It wasn't until the 1986-87 season did another major card brand (Fleer) start making basketball cards and Topps didn't get back in until the 1991-92 season just in time to cash in on the Shaquille O'Neal mania.  Thus, my idol, Isiah Thomas, was robbed of a true rookie card.  I've corrected that.

This card is working with the idea that Topps made a "Traded" set for their 1981-82 basketball set like they do with baseball to be able to have cards of guys on their new teams and the season's rookies.

I've made two other Isiah Thomas cards before this one but I'm glad I made this particular one now with my skills and know-how being further along than before.

On the card's front there's a great pic of Zeke during his rookie season.  The one thing I wish was different is the color scheme Topps chose to use for the Pistons.  It's the same as the Celtics cards and being as this photo is obviously taken from an away game at the Boston Garden it makes you think I was trying to pass off Isiah as a Celtic, which for a Bad Boys fan like myself is blasphemous.  I was excited to add Topps' all-star rookie trophy.  I loved those as a kid.  After all, Isiah DID make this all-star team as a rookie and continued to be selected an all-star for the next 11 consecutive seasons.

On to the back... I started by numbering the card "11T", the same way Topps would designate cards in their Traded sets.  A little detail was Isiah's weight.  Throughout his playing career he was listed at 180 lbs., but in the 1981-82 Pistons media guide he's listed at 1985 lb.  Let's assume these cards would have been started after the trade deadline so there wouldn't be a way to list the completed stats from the season, so with that notion I chose to list Isiah's collegiate stats from his two years at Indiana University.  This card is the first PCb. card to list statistics.  Then came some collegiate highlights and the mention of the all-star selection. 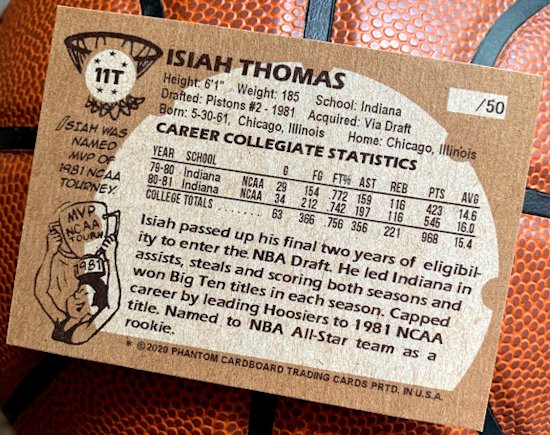 My favorite part is the cartoon art.  It's the same as on the reverse of the Magic Johnson card just of course with the years changed.  I think if you're a card nerd like myself these details are really important to have.

Posted by phantomcardboard at 11:41 AM