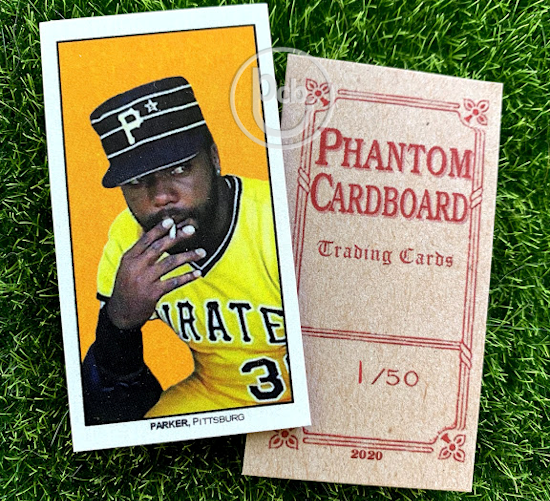 When I posted the first Dave Parker card I made to the PCb. Instagram feed it was suggested that I also make a card from probably the most infamous picture of the colorful Parker, that of him having a puff off a cigarette in the Pirates' dugout.  I had actually thought about a card for that while making the hockey mask card.  The card I originally envisioned would have a design inspired by the 1980 Topps set, the year in which the photo was taken.  But, the suggestion to make the card got me thinking in an entirely new direction... the T206 set!

The tobacco card set known as T206 was issued from 1909 to 1911 in cigarette and loose tobacco packs through 16 different brands owned by the American Tobacco Company. The T206 set contains the most valuable trading card of any kind, the Honus Wagner.  A PSA 5 Wagner most recently sold at auction in 2016 for a record of $3.12 million!  The reason for the card's premium is that so few exist and Wagner is an all-time great.  It's estimated between only 50 to 200 made it out to the public whereas tens of thousands exist for other players.  Wagner refused to let the card with his likeness be a part of the set.  The most common reason is that he didn't approve of the card being marketed in tobacco products that kids might try to buy, while another explanation has Honus wanting to be compensated better by ATC for being part of the set. 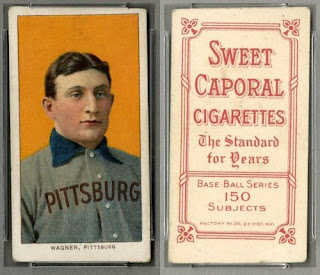 Nowadays it's odd to see a professional athlete smoking, especially knowing all of the dangers linked to it, 1980 though was a different time.  Back then you could smoke anywhere.  Both my parents smoked so as a kid out to eat I was subjected to the "smoker's section" of restaurants.  Myself, I never got why people smoked. Even as a young kid I fancied myself an "athlete", plus I've always been really pragmatic.  I just didn't *get* it.  I remember thinking "so, you put it in your mouth, light it on fire, then breathe in its smoke??".

Back to the card.  Being designed after the T206 it's obviously a tongue-in-cheek reference to the former league MVP enjoying a tobacco product... in-game, no less! I tried to make the photo look a bit like a lithograph like the original cards, but I didn't go overboard with it.  I also left the "H" off of Pittsburgh the way it is on the Honus card.  I aged the card back a bit by making the graphic look a little beat up and print off-center.  These are the approximate size of the T206 cards as well.

Posted by phantomcardboard at 7:20 AM