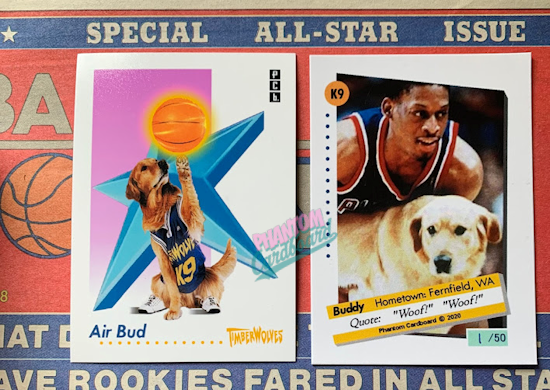 When Air Bud came out in 1997 I had no interest in seeing it.  I was in my late teens and it's a kid's Disney movie.  I was much too cool to see that type of movie.  I've never seen Air Bud (much less any of its umpteen sequels) until right before I started making this card.  I knew I was going all in on this idea so I wanted to be sure I was familiar with the movie so I didn't miss a detail that would help the card out.  I don't own Air Bud so I actually paid to rent it on YouTube.  That's dedication, homes.

The movie is cute, I guess.  As basketball obsessed as I was as a kid had this come out when I was say 9, or somewhere about, Air Bud probably would have been a personal classic to me.  I will say that Disney did a great job of finding an antagonist kid with a 10 on the punchable face scale.

What gave me the inspiration to make this card is the picture used on the backside.  That is actually the "Air Bud" being carried off of the court by Dennis Rodman during a 1992 NBA Playoff game between the Detroit Pistons and New York Knicks at Madison Square Garden.  "The Worm" scooped him up after Air Bud stormed the court during play.  I believe the dog was there to do the halftime show that was sponsored by Bud Light.  Yes, Air Bud could actually put the ball in the hoop by bouncing it off his snout.

There was nothing from 1997 that grabbed me as far as the card's design.  I choose a design inspired by the 1991-92 Skybox because of the court storming incident and because I love the design and have been wanting something to come along that would inspire me to use it and this was it.  I've been working on a signed '91-'92 Skybox set for quite sometime.  The with all the white negative space as part of the design it really helps autographs to pop.
This card is kind of ridiculous, I admit.  I spent a TON of time on it, too much really.  Even though I'm not a huge Air Bud fan, this card, from a technical standpoint, has got to be one of my favorites that I've done in a while.

Posted by phantomcardboard at 9:03 AM