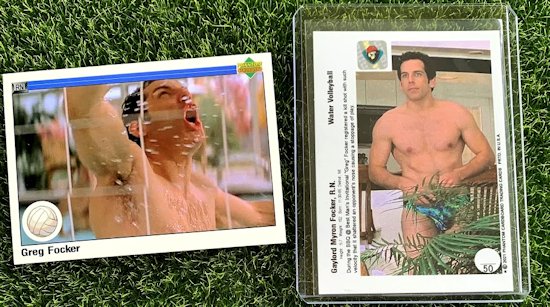 I've been sitting on this card for a little while now.  I've been having ongoing issues getting my cards produced.  It's been one thing after another.  Candidly, it has really bummed me out and stifled my creativity/enthusiasm for creating new cards.  I've met with a couple of new vendors so hopefully *fingers crossed* I'm approaching the other side of these challenges.

I don't like moving forward with unresolved issues hanging overhead, but I got to thinking that bringing out a fun new card might just need the right kind of therapy.

I make an effort not to be too hyperbolic.  If everything is the best, then nothing is really the best.  But then again I primarily just spend time making custom cards of things I really enjoy, so it makes sense that I put the card's subject on somewhat of a pedestal.  With that being said, I'm confident -without giving much thought to what the other four movies might be- that Meet the Parents is easily a "Top 5" funniest movie for me.  It's not just funny, it's downright hilarious.  I tend to find it very humorous when people are put in uncomfortable situations where in that moment they don't exactly know how to react to what's happening to them.  That's what Meet the Parents is to me.  Ben Stiller always plays the perfect put-upon guy.  I guess I can relate to that.  I tend to take things I shouldn't preferring not to rock the boat.

From start to finish Meet the Parents is genius.  The pool scene in particular is a masterpiece in my opinion.  From Greg having to wear Pam's ex-boyfriend's bikini trunks in his pool that's in his immaculate home to the multiple nurse/pot-head jabs from Jack and Dr. Larry, to Pam's mom jumping into the pool fully clothed to aid her daughter whose nose was just broken by a viscous Greg Focker spike.  The whole scene culminating in the volleyball net creating a physical divide between Greg and the rest of Byrnes clan.  Just brilliant.  You know Greg must really love Pam because most people would have just been like "this is not going to work, I'm out" long before that.

Meet the Parents came out in 2000.  Well past the time period I usually do custom cards in.  So, in picking a template I wanted something that had at least a tiny bit of a modern look to it.  It also had to be a versatile design seeing as there's no real preset 'look' that a water volleyball card should have.  I thought for those reason a 1990 Upper Deck baseball inspired design would get the job done.

I had to reorient the template into a horizontal layout.  There may be some cards from that set that are flipped horizontally but I didn't take the time to seek them out, I just sort of eyeballed the border ratios from one of the horizontal layout.  This was necessary because the screen shot I found of Greg mid-kill shot was totally lost in the vertical mockup.  Of course there were no team logos so rather than leave that element out I went with a generic volleyball to keep more of that 1990 U.D. aesthetic alive.

On the back is an ultra uncomfortable Greg aka "G-Man" aka "Glen" aka "Florence Nightingale" aka "Panama Red" in Kevin's bathing skivvies.  God, just put yourself in that situation!

Posted by phantomcardboard at 7:48 AM