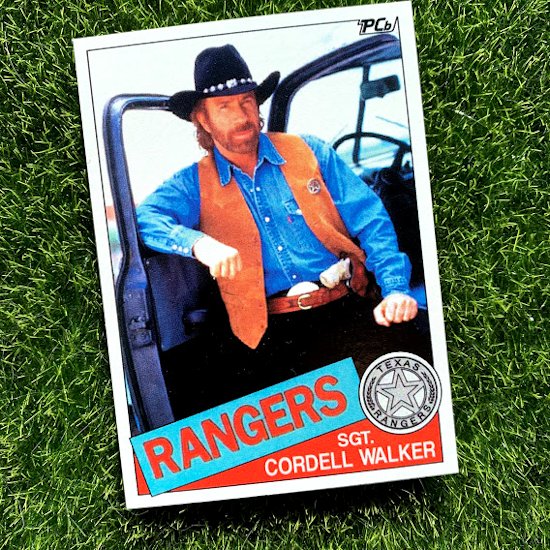 I thought this would be a fun custom to do.  I mean, who doesn't love a good Chuck Norris meme or custom trading card?

Although I've landed on Walker, Texas Ranger while channel surfing, I'm pretty sure I've never actually watched an episode.  That's okay.  I feel I've watched enough Chuck Norris movies to say I've paid my fan dues.  Plus, I love the Karate Kommandos cartoon from the mid '80s -- even if it was only a 5 episode mini-series in order to sell the action figures.

This card is a play on the baseball Rangers team name in the very same spirit as the  André the Giant card I did, and the Schwarzenegger/DeVito Twins before that.

In choosing an template to emulate I gave myself two prerequisites; one, it had to be an '80s Topps inspired design and it had to be a year that featured a team logo because I wanted to use a Texas Ranger badge as said logo.  That leaves ya with 1985 and 1987.  I mocked them both up and decided to go with '85.  The reason why might seem counterintuitive, but I felt like the '87 design looked too much like it could be an actual Walker, Texas Ranger  trading card and kind of lost, for me, the 'repurposed baseball card' feel.

Posted by phantomcardboard at 8:22 AM