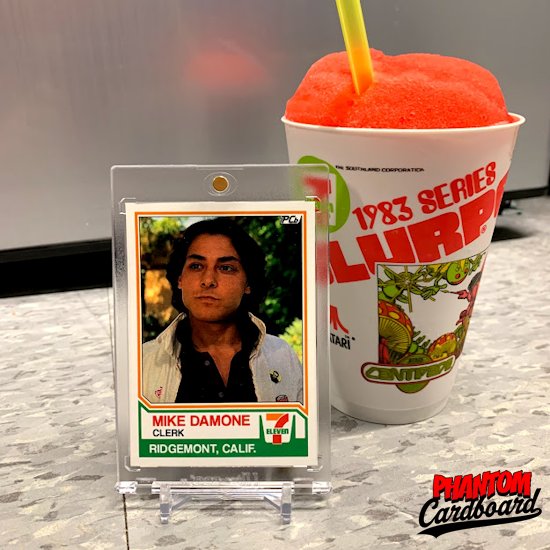 I recently picked up the Fast Times at Ridgemont High Criterion Blu-Ray and it reignited my love for the movie.  Currently it's one of the movies in a four-way tie for my "favorite" movie.  If you haven't picked up the Criterion Blu-Ray I'd HIGHLY recommend it.  It includes the TV edit of the film which basically feels like a whole nother movie with all the alternate and unused footage used in that cut.  They also put Damone's dong (if you're into that kind of thing) back in the pool house undressing scene that was originally omitted back then to avoid an X rating.  And of course there's the special feature commentary type stuff.

There's certain things I'll always be on the look out for ideas to make more cards of and anything from Fast Times certainly is one of them.  But, it's gotta be something that makes sense and not a generic 'just because' type of reason.

While watching the movie for the upteenth time I thought up a conceptual card, kind of like I did with the Charles Barkley Pizza Hut card.  During the credits they give some updates on a few of the main characters as to what they went on to do shortly after the time of when the movie leaves off.  Mike Damone ends up working at 7-11 after being busted for scalping Ozzy Osbourne concert tickets - a fate which Mike foreshadowed earlier in the movie (see quote above).  That gave me a fun idea for a with-purchase promotional card from 7-11 for Mike Damone. 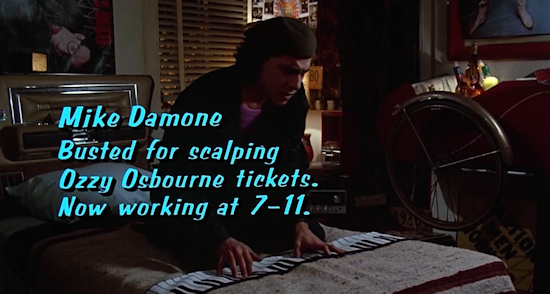 During the "junk wax era" there was no shortage of special card tie-ins with brands and products.  Along with commemorative Slurpee cups, 7-11 would also come to offer several card tie-ins over this time period.  So, I decided to conceptualize a 1983 promotion where 7-11 highlighted some of their employees in special edition trading cards.  A totally ridiculous concept, but it gave me another Fast Times card so I went with it.

For the card I went with a template inspired by the design of the manager cards within the 1983 Topps baseball set and decked it out in 7-11 colors.

On the back I included that Damone was originally from Philadelphia.  This is no mention of this factoid in the film, but it is a character background detail revealed during an interview by Robert Romanus.

Posted by phantomcardboard at 9:37 AM