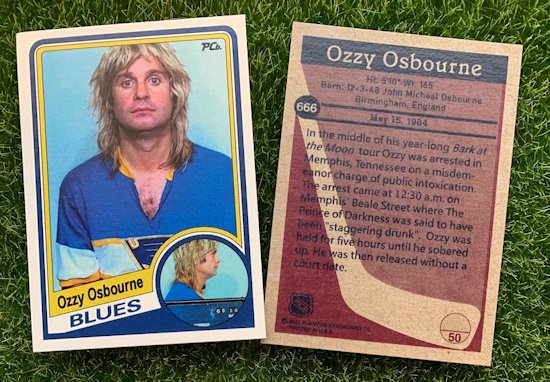 There was that one time in 1984 in when Ozzy Osbourne was so bombed on Memphis' Beale Street that was taken into custody so he could sober up.  Oh, and he just happened to be wearing a rad St. Louis Blues jersey shirt in his mugshot.

Beale Street is a party street so most people are three sheets to the wind while on Beale. Plus it's Ozzy freaking Osbourne in the mid '80s when, I'd hazard a guess, his baseline was inebriation.  So, that begs the question as to how much alcohol was in his system to result in him being arrested for public intoxication??

There 's no better way, in my opinion, to commemorate a mildly sports-related mugshot than a custom trading car.

It was a obvious choice to go with the '84 Topps hockey inspired design.  It's quite perfect that the design calls for two images so both front and side view of Ozzy's booking photo could be utilized.  The back sees the event detailed in the matching '84 style.

Posted by phantomcardboard at 9:28 AM