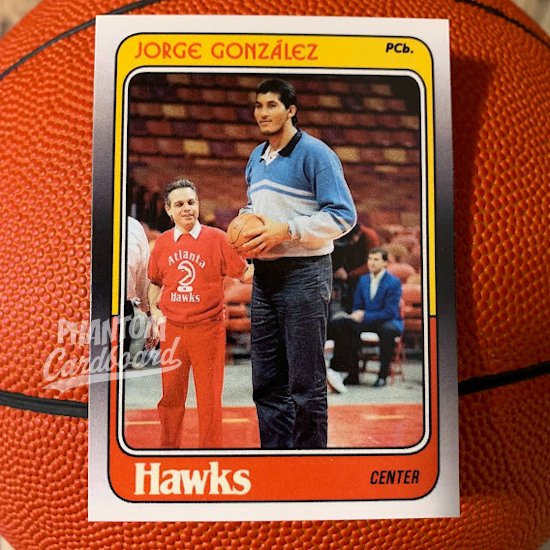 I remember Giant González during his brief WWF stint both for his size and his ridiculous furry airbrushed muscle body suit.  I don't remember his in-ring work in any great detail because my interest was beginning to wane away from pro wrestling by this time in 1993.  I do remember marveling at the enormity of this human being.  At 7'7" Giant González was actually 3" taller than André the Giant.  But unfortunately, unlike André, there doesn't seem to have ever been a time when Jorge was nimble in his own frame even relative to giant standards.
When you're as tall as Jorge González was it's pretty much inevitable that someone is going to put a basketball in your hands, even if your height is the result of a genetic defect.  Jorge got a spot on the Argentinian national team and eventually NBA scouts came around and saw him, well, being really tall.
When your head is that close to the rim the odds are that someone in the NBA is going to take a chance on you.  That someone was the Atlanta Hawks.  The Hawks selected Jorge in the 3rd round (54th overall pick) of the 1988 NBA Draft making him the first ever Argentine ever drafted by the league.  It took very little time to determine that González's body was not going to hold up to the rigors of NBA play.  Not one to pass up on a marketable asset Hawk's owner Ted Turner hard pivoted Jorge's career path to that of a professional wrestler in the WCW, which he also owned.  Jorge debuted for Turner's World Championship Wrestling in 1990 and would wrestle for the promotion until 1992 when health problems forced him back home for treatment.  González resurfaced in 1993 in the Vince McMahon's World Wrestling Federation, but was only with the company for about 10 months.
Jorge was able to get a couple more years as a wrestling attraction by going overseas before retiring in 1995.  He passed away in 2010 at the age of 44 due to complications from diabetes and severe heart issues. 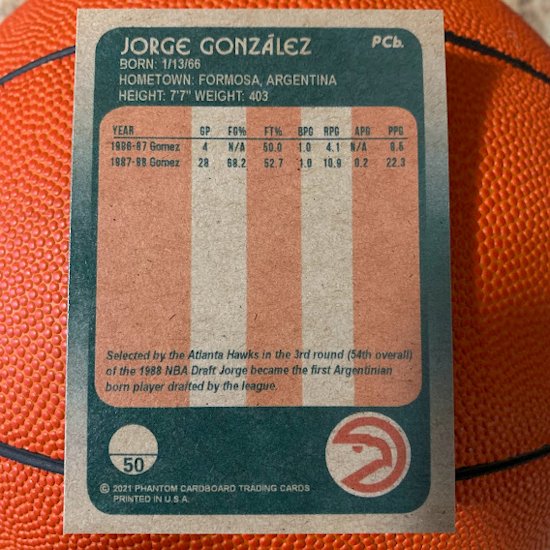 I recently came across the photo used for this card showing Jorge dwarfing then Hawk's coach Mike Fratello in Atlanta's Omni Arena and thought it would make for a cool custom card.  If there was any foresight back then to Jorge González's eventual pop-culture status there may very well have been a card made of him, so hopefully this card fills someone's 'cards that never were' gap.
Being as Atlanta took Jorge in the 1988 Draft the card gets a 1988-89 Fleer style framing.  Surprisingly I was able to find some stats from Jorge's  final two seasons in Argentina with gave the card back a big boost in my opinion.
Posted by phantomcardboard at 9:42 AM