Although I didn't have any cards made up of Gina Carano, I wanted to add her to me autographed custom card collection if given half a chance.  That chance came via a private signing with SWAU a couple of months back. This is the first time I've used their service and I have only good things to say.  They're very professional and their site allows you to keep up-to-date on the status of the signer you're waiting for.

The majority of cards I get signed are through the mail.  It's a bit of a gamble.  You never know what you'll get back, and I guess that's part of the fun.  But, occasionally I'll send into private signings.  With a private signing it's the opposite.  You now you're going to get a return every time, well, almost every time.  With a private signing you assume the role of paying customer so you pretty much get to have what you want, how you want it.  Whereas the other way you never really know if it'll be signed where you want it, if it'll be damaged or lost in the mail, if the signature will be smudged, etc.  Lots of variables.  I also like to not have my autographs personalized.  They're generally just for my private collection, I just don't like my name written on the card and you can specify that with a private signing whereas some celebs will automatically personalize to cut down on people selling their autographs.

So, when I saw the Gina signing being advertised I got to work on making a card.  I chose to go with a 1991-92 Skybox design which is a template I LOVE for autographing, but haven't had much success getting cards autographed when I've used it.  I actually collect official '91-'92 Skybox autographed basketball cards.  They cards have a helluva cool and clean aesthetic that lends so well to autographs because of all the white space.

The picture I chose came from Gina's 2009 ESPN Magazine "Body Issue" that was actually used for the magazine's cover. It's a pretty iconic picture for both Gina and the magazine.

For the back of the card I used a weigh-in picture of Gina from her last professional MMA fight in 2009 vs. Cris Cyborg.  That fight is probably the single most important fight for pushing the envelope for women mixed martial artists.  I think that also made it obvious to everyone that Gina was a big-time box office draw and afforded her the opportunity to pivot into a big screen career pretty easily.

In looking for the right image for the Skybox-style card I came across other images that pained me to just leave on the cutting room floor, so I said "what the hell" and just made a second custom Gina Carano card for the signing.

The design of the second is an original design of mine.  In my files I label this design as "horizontal split", pretty to the point.  I've done a number of cards with this template but, before this card, have had zero success on a return.  I usually use this design when I just cannot decide between two images so I just use them both. 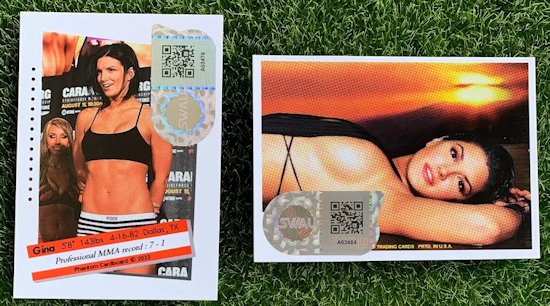 I really dig that SWAU uses a holo-sticker with a QR code to easily verify autographs from their signings.  I like it for both the obvious reasons and also that it adds an 'official' look to my cards.  Hopefully they partner with

Posted by phantomcardboard at 10:10 AM