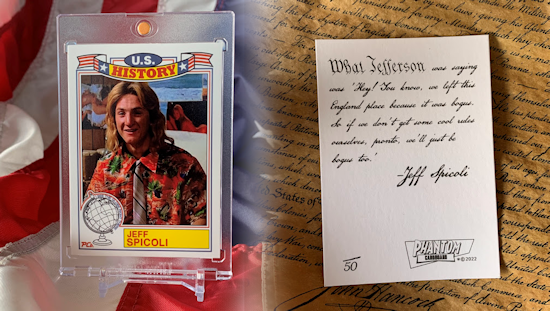 I've been sitting on the idea for this card for quite a few years.  I think the reason it hasn't gotten done until now is that I wanted to time it with Independence Day and in years past the 4th of July has always snuck up on me and then it would be too late, so it would go on the backburner for a year at a time.  More recently I've mainly been working on autograph cards for my personal collection, so this time it was easier to take a break from that as opposed to being in the middle of creating a new mini-set and not wanting to pause from that.

The idea for this card was always to do it in the style of the old glossy rack pack all-star inserts.  Anyone who collected baseball cards in the '80s probably had a few of these in their collection.  These cards highlighted MLB all-stars from 1984 to 1991 with virtually no change to the design with the exception of updating the year at the top.  I chose this design for its 'all-American' appeal.

Fast Times at Ridgemont High is one of the 5 or so movies I consider to be my "favorite" because I just can't pick a clear winner, as I like different movies for different reason.  Fast Times, as well as The Karate Kid (another on that favorites list), are movies I've exhausted most any sensible trading card tie-ins for.  I particularly enjoy making cards for Jeff Spicoli and Linda Barrett with those two being my favorite male and female characters in the film.  I'm sure that's also true of most fans of the movie due to their respective magnetic scenes. 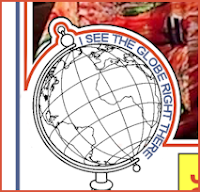 The scene depicted on this card was foreshadowed on the first day of school - "Just like you wouldn't want me to come to your house some evening and discuss U.S. history with you on your time" - and is the third and final act in Mr. Hand and Jeff Spicoli's adversarial teacher/student relationship.  After having Mr. Hand's will imposed onto him in the first two acts Jeff was able to muster a little redemption with his recounting of the American Revolution in the most Spicoli way ever.  That summary of events of what led to the birth of a new nation I thought would be the perfect card back in a Constitution/Declaration of Independence style presentation.

One element this card HAD to have was a reference to, in my opinion, one of the funniest lines in Fast Times when on the first day of school Jeff Spicoli, despite the totally confusing new schedule, reasons that he's found the his U.S. History class he's supposed to be in because he spots a globe in the back corner of the room - "This is U.S. History, I see the globe right there."  Dead giveaway, right?

Posted by phantomcardboard at 7:12 AM