Paige Spiranac And The 2022 NFL Season Kick Off 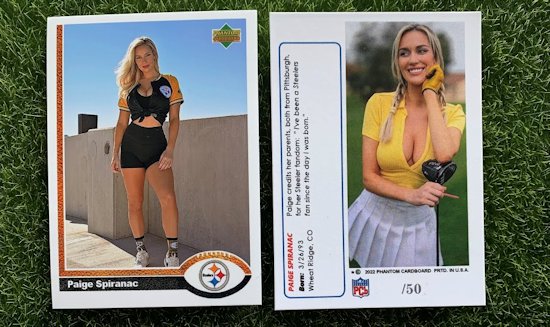 I thought today would be a good day to post this new card with the 2022 NFL Season kicking off tomorrow, with the defending Super Bowl Champion Rams taking on the Bills.

Typically I don't put enough forethought into the cards I make to time them to dates of any certain significance.  I just make them when the inspiration hits me and post 'em up.  I've got a bunch of pictures saved that I eventually want to make custom cards out of.  This image of Paige Spiranac, a self professed Steelers die-hard, is one of those images.  I've had the picture in my "cards to-do" folder for quite awhile now, but I collect inspiration at a much greater pace than I make cards.  To even that out I'd never be able to get up from my desk and my work probably wouldn't consider that enough of a reason for calling off.  So, what I'm saying is that it's more of a coincidence that I'm posting a football card coinciding with the start of a new NFL season.

This card is inspired by the 1991 Upper Deck football set.  This is a design that has found a home with my cards.  It's clean and straight forward.

Though I've only posted one other Paige Spiranac card here, I've actually made quite a few.  Since she's a sports personality I've stumbled upon numerous images that lend to custom card making.  I'll eventually get around to posting a collage or something of those on here.

Posted by phantomcardboard at 8:59 AM