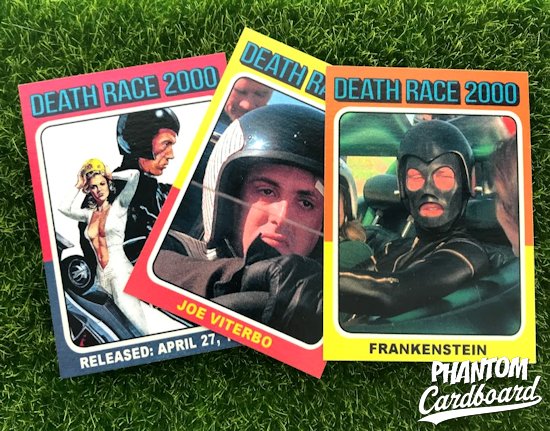 I ended up doing these Death Race 2000 cards as a happy little accident as Bob Ross would say. I made a "Scorpio" card from the movie Dirty Harry wanting to try to get a through-the-mail autograph from Andrew Robinson. For some reason I was under the impression that Dirty Harry was released in 1975 and I didn’t realize this error (actually 1971) until the card was already complete.  Now I had a 1975 Topps baseball inspired theme made but nothing to use with it. So, I researched movies that were released that year with an emphasis on characters played by anyone who signs through the mail. One of the first movies that came up was Death Race 2000 which had my main man Martin Kove in the cast. Pretty serendipitous in my book.

Back in the early 2000’s I was a subscriber to Maxim magazine (also Stuff and FHM for good measure). I loved those magazines. Every month all the coolest guy content in small little quick bites. Maxim in the bathroom was like a smartphone before taking your smartphone in the bathroom with you was a thing. In Maxim’s February 2000 issue they had a list compiled of what they considered to be the 50 best B movies of all-time. At the time that list was like a treasure map to me. I’m a B movie kind of guy and I wanted to seek out and view all of them… which I’m still working on.

Listed at #1 was Death Race 2000 which I had not seen it up until that point. I had to see it, or really any movie that would top such a list. So, I sought out a copy. I wasn’t having any luck finding it. I contacted a local Media Play to see if they were carrying it, they were not but said they could order the DVD for me. Sold! It was one of the very first DVDs I purchased after getting a DVD player in 2000. Poison Ivy - A New Seduction was another one of the early DVDs I bought. I only mention that because it came in at #4 on Maxim’s list.

I watched it and really got a kick out of this movie. If you’ve never seen the Death Race 2000 it’s about a government sponsored auto race from one side of the continent to the other all while racking up points by running over people along the way. People are worth varying point values where the more docile you are the more points you’re worth and it’s considered somewhat an honor to be "scored" by one of the drivers that are all over-the-top caricatures.  It’s a bleak futuristic setting following the “World Crash of ‘79”  where the United States is reorganized under a new dictatorial style government, a government that puts on this race every year to pacify the citizens apparent blood lust. There’s a rebel group that realizes running over people for sport is pretty fucked up and so they set out to sabotage the race with an ultimate goal of overthrowing the government. If, like me, you had to read Shirley Jackson’s The Lottery in school then think that story line with 1980’s WWF type gimmicks driving cartoonish themed muscle cars and then you get Death Race 2000. 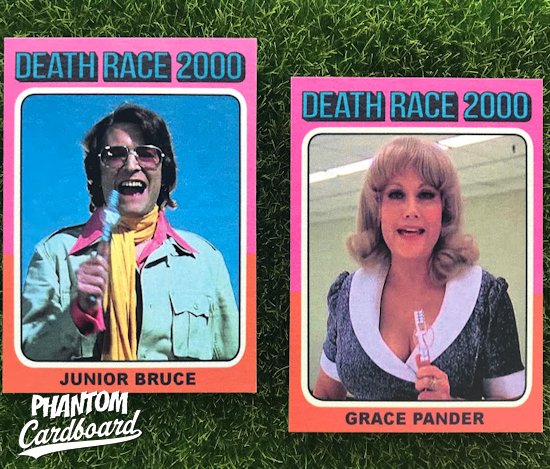 You take that plot and mix it with characters that are, like I mentioned, completely over-the-top and you can totally see why Maxim would give it the B movie pole position. 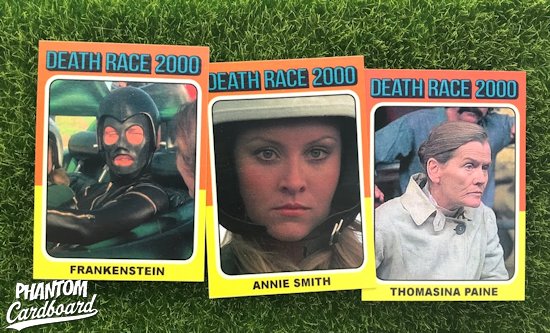 David Carradine is the leather gimp coiffed lead character “Frankenstein” who is somewhat a dark anti-hero type with a zealot like following earned by his race/kill prowess.  He’s dubbed “Frankenstein” because he’s basically a patchwork of a person due to infamous Death Race crashes in which he always seems to lose an appendage that’s later reattached. Each driver has an  a navigator riding with them. I made the driver/navigator cards the same color to signify a team even though some of the original 1975 Topps color combos seemed to be random. It also gives the cards a fun and colorful look when they’re together; it kind of reminds me of an Uno deck. "Frankenstein’s" navigator, “Annie Smith” is a surreptitious plant of the resistance that’s trying to overthrow the government. She’s actually the granddaughter of Thomasina Paine, the leader of said resistance. "Annie" is played by Simone Girffeth and good God is she beautiful, distractingly so. I found it difficult at times to follow the movie and not just pause it to look at her. As a bonus to anyone with the gift of sight she’s in her statuesque birthday suit in a few scenes because, well, the ‘70s. As a side bar I recognized Simone from her guest role on my favorite episode entitled Links of my all-time favorite T.V. show The White Shadow and she was every bit as jaw dropping five years later as the coach’s love interest for that episode. Drooling over Simone is not to sell the other female leads in this movie short, they’re all knockouts.

Then there’s a pre-Rocky Sylvester Stallone as a “Machine Gun Joe Viterbo” whose shtick is a prohibition era styled gangster with a short fuse and inferiority complex on account of him being the greatest living racer … not named “Frankenstein”. I took movie over my buddy’s first apartment and we watched it with the aid of a few cold beers, which just makes it all the more enjoyable by the way. Both he and I were rolling every time "Machine Gun Joe" would go ape shit after being slighted by  “Frankenstien’s” fanfare. "Joe" starts the movie by going ballistic with his Tommy Gun into the crowd gathered to watch the start of the race because “Frankenstein’s” large following that was booing him. He even scores his own mechanics after overhearing them talk shit. 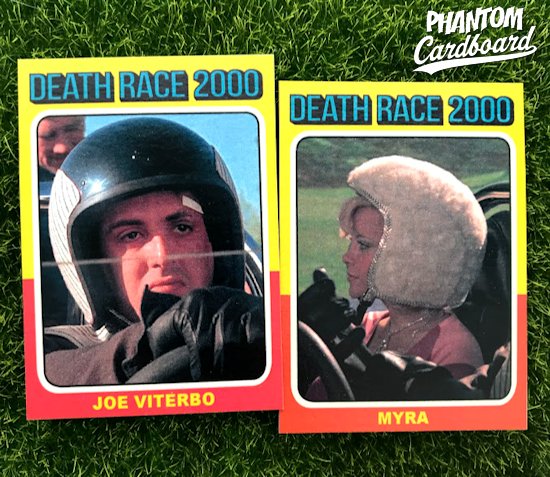 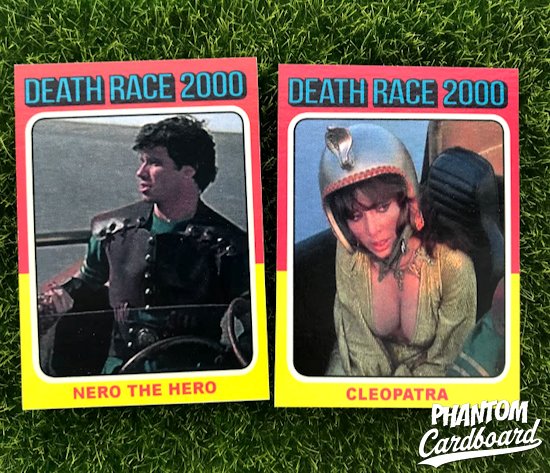 Let’s not forget Martin Kove who was the first card in the set knowing I could count on him for an autograph. Kove’s gimmick is a Greek gladiator type character by the name “Nero The Hero”. You also have a cowgirl driver in “Calamity Jane” and a Neo-Nazi in “Matilda The Hun”. Both “Matilda” and her navigator, “Herman The German”, had swastikas on their race helmets which I chose to crop of by getting in tighter on their faces. It was more acceptable back then as satirical trait for a German character but just hasn’t aged well. The movie itself though has age well in my opinion. What I mean by that is that when it came out it got a bad rap for the violence and gore it portrayed. You have to remember it predated the slasher films of the late ‘70s and on through the ‘80s. Viewed today the low budget gore comes off as campy and actually has more of a comedic value when compared to the more sophisticated makeup that would come just a few years later. 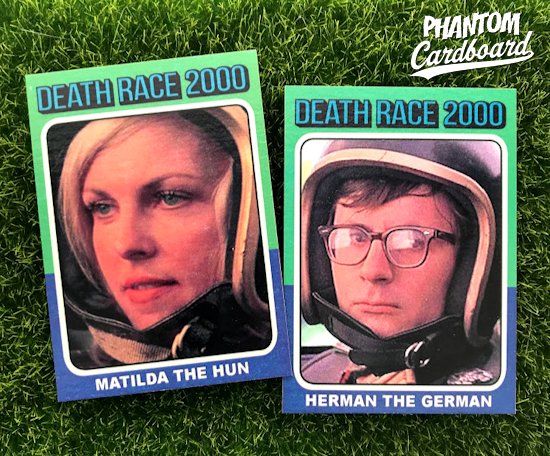 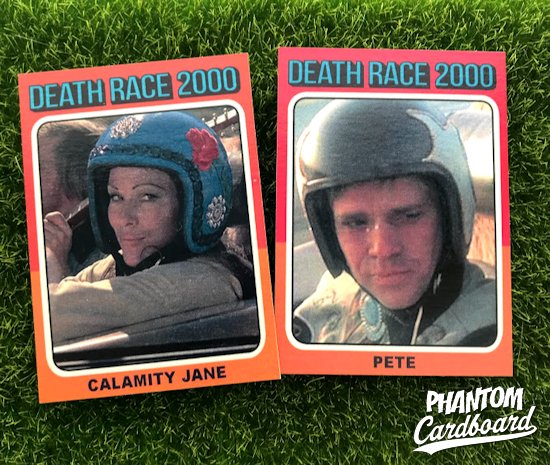 As far as the autographs go I have Martin Kove’s card signed. I’ve got cards pending from Mary Woronov (“Calamity Jane”), Louisa Moritz (“Myra”) and Simone Griffeth (“Annie Smith”). It’d be awesome to add any of those. 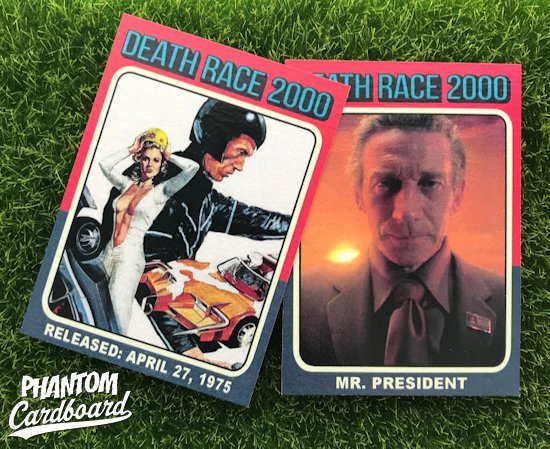 If you'd like to pick up this set I've added it to the PCb card shop.
Posted by phantomcardboard at 7:46 PM