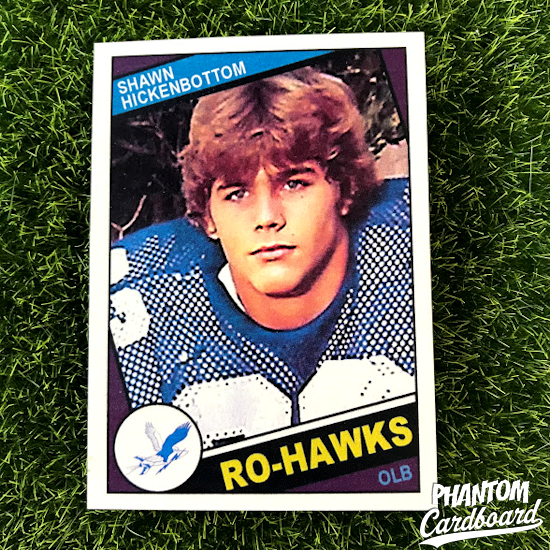 In addition to being The Showstopper, Mr. Wrestlemania, a sexy boy and not your boy toy, Michael Shawn Hickenbottom was quite an accomplished high school football player.

Long before delivering Sweet Chin Music to Marty Jannetty through The Barbershop's window Shawn -preferring his middle name over his first- was the youngest of four kids born into a military family. After moving around a bit  Shawn’s family settled in San Antonio, TX where he attended Randolph High School located on the Randolph Air Force Base. Shawn excelled on the gridiron as an outside linebacker playing on both sides of the ball and was even made a team captain.

I ran across the a picture of Shawn in his high school football equipment and knew it would make for a great football card.  I read somewhere that HBK broke into wrestling in 1986 at the age of 20 so I figured that probably meant he graduated high school two years prior in 1984, so I used a 1984 Topps football inspired design.

Since the Randolph High Ro-Hawks (a compound of the words rocket and hawk) colors are silver and blue I used a the Detroit Lions color scheme from the 1984 set.  I was also fortunate enough to find a Ro-Hawks logo to complete this card.

Get a copy of this card here.

Posted by phantomcardboard at 7:13 PM