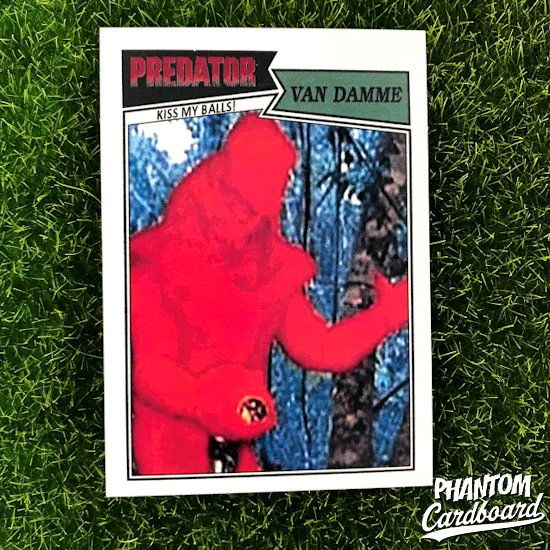 Unless this is your first time on this blog you the reader have come to know that I may have a thing for ‘80s nostalgia, yes? Since the invent of this thing we’ve come to know as the Internet I, as often as the opportunity presents itself, immerse myself in all things ‘80s that the Web has to show me. Now I’m not claiming to be an ‘80s historian but I know a thing or two. With that being said, how the hell am I just finding out that Jean-Claude Van freaking Damme was the original "Predator"!? Before being replaced because "The Muscles From Brussels" wouldn’t acquiesce to producer Joel Silver’s insistence that the hunter from an alien planet was not a kickboxer!? Why isn’t that as common of knowledge as Arnie not being able to properly pronounce "chopper"? Shouldn’t you go to say to a buddy “you know in Predator…” before being abruptly stopped with “yeah, Jean-Claude Van Damme was original "Predator", who doesn’t know that?” Well, I’ll tell you who didn’t - ME!


“I was in Joel Silver's trailer, and he had called for Jean-Claude to come see him. And he comes in the trailer and Joel starts saying, 'You gotta stop kickboxing!' --- because [Jean-Claude] wanted to kickbox --- and he was telling him, 'Look, the Predator is not a kickboxer.' And Van Damme was like (Van Damme voice), 'I must do that; that's how I see the Predator.' And Joel said, 'Well, you're fired. Get out of here.' And Van Damme says, "Kiss my balls!" and walks out, and that was the end of that.”

Ho-ly hell, that is the greatest thing ever. “Kiss my balls”!? Bold move for a young unknown in Hollywood looking to become a star, eh? I’ve read reports where Van Damme was basically trying to position the “Predator” to have a mixed martial arts showdown with Arnold Schwarzenegger’s “Dutch” character. He envisioned this alien hunter character karate kicking his prey! This is just me freestyling a bit, but I have to imagine if they would have let the kicks slide it would have opened door to the “Predator” doing Jean-Claude’s signature nuts-to-the-ground splits. That would have been both ridiculous and awesome.

I’ve also read other things that say that even beyond Van Damme trying to turn the “Predator” into a Ninja Turtle the powers that be just weren’t happy with him as the alien, and neither was he. Jean-Claude hated the “Predator” suit and he let that be known. The suit itself was redesigned for the more imposing 7’3” Kevin Peter Hall who ended up in the role after Van Damme. As you can see from the card the original suit had more of a praying mantis looking head. By the way, the suit is red so they can do the CG camouflage stuff with it in post production in case you were wondering.

I think we can all agree that looking back everything turned out just fine for all parties involved. Even me, because I got to add Van Damme’s “Predator” to my Predator set.

I was actually done with this set when I found out about this little piece of Earth shattering lore, but I gladly went back and fashioned a late addition. This Predator mini-set, done in a 1987 Topps football inspired design, started with three cards “Blain”, “Mac” and “Predator” knowing that there was a good chance that I’d be able to get autographs through the mail from Jesse Ventura, Bill Duke, and Peter Cullen (uncredited "Predator" voice) respectively which can all be seen here in all their autographed glory. As the story has gone in my recent posts I’ve been adding additional cards to single cards I’ve already created to make what I’m calling “mini-sets” which brings us to this 10 card mini-set. One thing that I’d note with this mini-set is that I added a few humorous touches to some of the cards to have fun with them and round the edges a bit on an otherwise serious kick-ass action movie. If you’d like your own set (not a balls pun, I promise) you can pick them up in the PCb card shop. 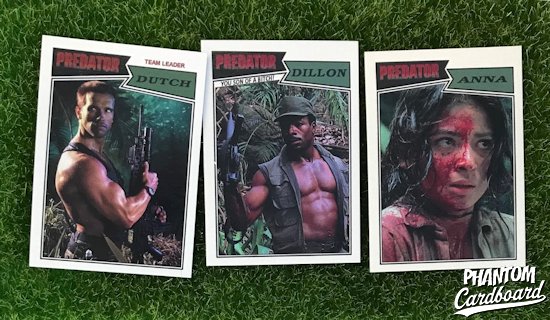 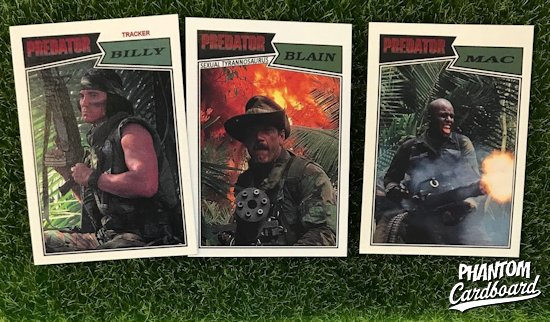 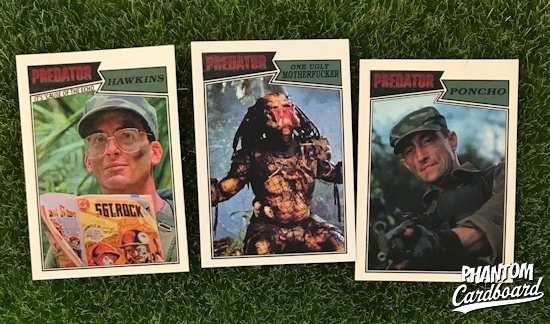 Posted by phantomcardboard at 7:31 PM