My fourth Motor City Comic Con is in the books and I came away with radical autographs of  '80s icons. This is really the genesis of how Phantom Cardboard came to be. I wanted to make cards for things I loved from my childhood that didn't exist and then the ultimate coup would be to have the cards autographed.

One of the first things I saw was a tribute to Margot Kidder who was supposed to be signing there this year but sadly passed away just five days ago. There was a bouquet of flowers and a poster board of sorts that fans were signing. 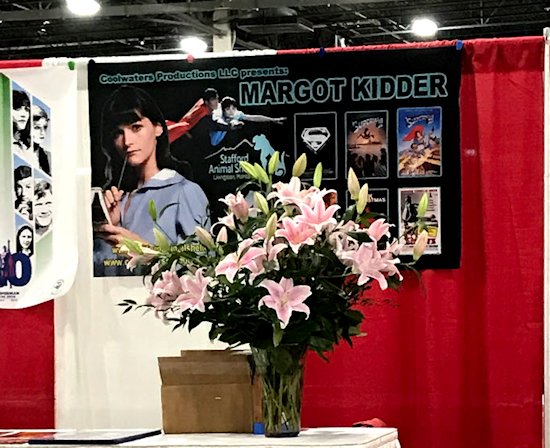 First up was Larry B. Scott as he was there well before all other signers. Of course there's Revenge of the Nerds and The Karate Kid, but I totally forgot he was in That Was Then... This Is Now and SpaceCamp, a couple other '80s movies I really like.

Earlier before going to Comic Con I posted a picture on Instagram of one of my newest cards, the Cobra Kai "Tournament Future Stars" card done in the style of the 1984 Topps baseball card set. This card came about because I wanted to add cards for Cobra Kai members Bobby, Tommy, Jimmy, and Jerry to the Dutch, Johnny and Kreese cards I already made, but I couldn't seem to find any decent quality screen captures to use. What I decided to do was create a "Future Stars" card with the images I could find. Since the images only needed to be small head shots they didn't need to be super high resolution or anything. Topps -to the best of my knowledge- didn't make Future Star cards for their 1984 set, so I had to wing a design.

I saw that Larry B. Scott had an Instagram account and had posted about being at the Motor City Comic Con today so I tagged him on my card's post which he in turn liked. I was hoping when I went to have him sign it he would recognize it from that post and he did, which was super gratifying.

For Larry I had the Cobra Kai card as well as and another card inspired by the same 1984 Topps baseball set, a Lamar Latrelle Tri-Lamb card.

Larry was super cool and interacted great with each fan. He took care to find out how I wanted my cards signed which is always appreciated. He signed the Cobra Kai card small for me knowing I hoped to add three other signatures to it in the future. 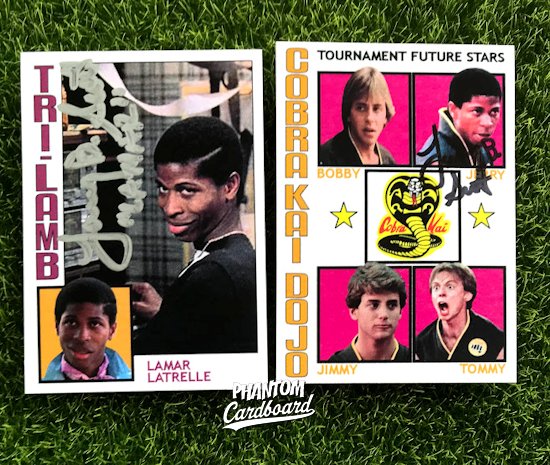 He seemed to really like my cards. The first thing he said was that he had never seen these before which was a statement I got from all the signers really. That makes me feel good that I'm contributing something unique for '80s nostalgia fans like myself.

The second signer I visited was Donald Gibb. If I heard correctly, the two people ahead of me were greeted with a "what up dawg?" from Mr. Gibb. If that's the case, it's one of my favorite things from the day.

For him I had cards from Revenge of the Nerds and Bloodsport done in Topps inspired card designs from the respective years of the two movies releases. Donald told me he'd seen things like fan made jerseys and helmets but never trading cards. 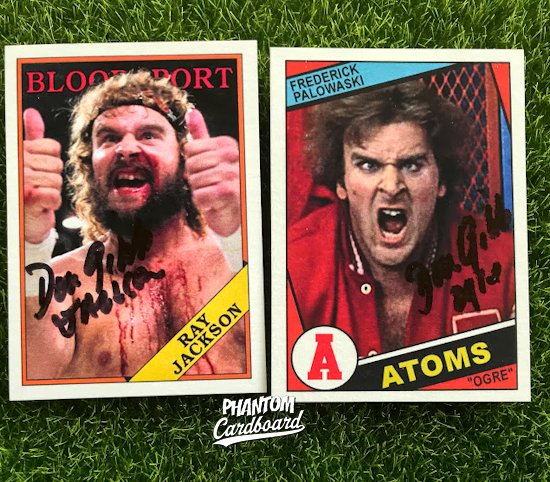 Here's where it gets kind of funny. Mr Gibb asked if I'd like to take a picture with him and I told him thanks but no because having my picture taken really isn't my thing. I'm one of those who rarely likes how he looks in pictures. Anyways, he replies "I don't blame ya". As I'm walking away I'm thinking to myself that he just went full Ogre on me because I'm this big nerd! I was kind of crushed and honored at the same time to have just been insulted by Ogre. But, after thinking about it I'm pretty sure he just meant he wasn't big on picture taking either.  ... I hope. 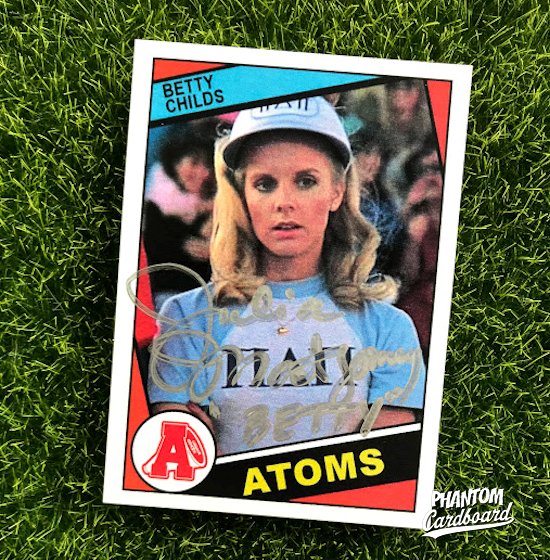 Next was another Revenge Of The Nerds Alum, Julia Montgomery. Julia was super sweet. She loved the card. She was even seemed hesitant to sign the front because she said it was "beautiful" and didn't want to write on it. She asked if she could take a picture of it but I did her one better and gave her her own copy which she really seemed to appreciate. Like last year I brought extras of all the cards I had to be signed in the event the signer showed an interest then I could give it to them as a token of appreciation. Also like last year though I didn't outright offer the card if I wasn't 100% sure they would want it in fear of the signer saying "nah".

Last up was THE man, the one I came to see, William Zabka. This was actually my third time seeing him but I had to get his autograph again with my fanhood at an all-time high thanks to the masterful job that was done on the YouTube Cobra Kai series. 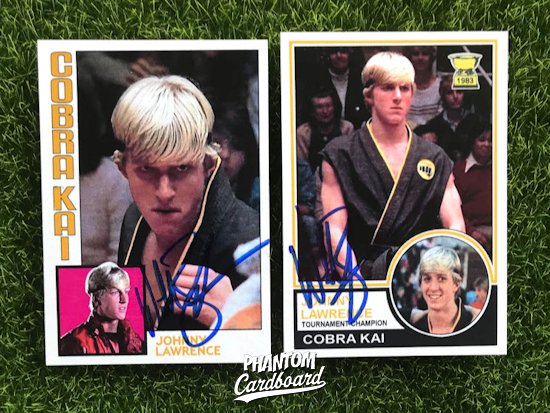 I'm not sure what the reason was but Mr. Zabka was delayed getting there. I heard he was expected there around 1:30 but I think he arrived there closer to 3 and I was there near the front of the line that had formed to wait for him. Despite the delay he was greeted to a heroes welcome upon arriving at his booth. Like before he was great with his fans, high-fiving and proclaiming "Cobra Kai is back!". Before he got to signing he took out his phone and took a video of us the fans doing some Cobra Kai chants. Hokey, but fucking awesome. 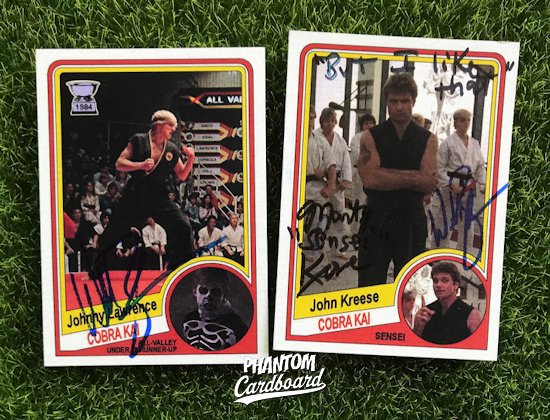 He complimented me on my cards saying I did a nice job on them and I told him how much I enjoyed the Cobra Kai series. I wanted to chat him up more but he had a decent sized line that had quickly formed so I just thanked him, shook his hand and shuffled off with my new treasures.

There's two other cards I brought to have signed. A Willow Madmartigan card for Val Kilmer and a Michael from Lost Boys card for Jason Patric to ink. I guess I didn't bother to read that they would be there Saturday and Sunday only. Although it would be epic to get these two cards signed, I'm not planning on going back. I like going on Friday. For one it's less crowded, and two the tickets are a fraction of what they are on the weekend. Maybe another time. 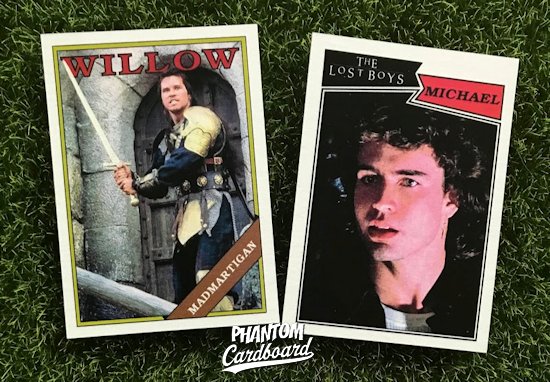 Posted by phantomcardboard at 6:54 PM