Not That Boy From Reseda 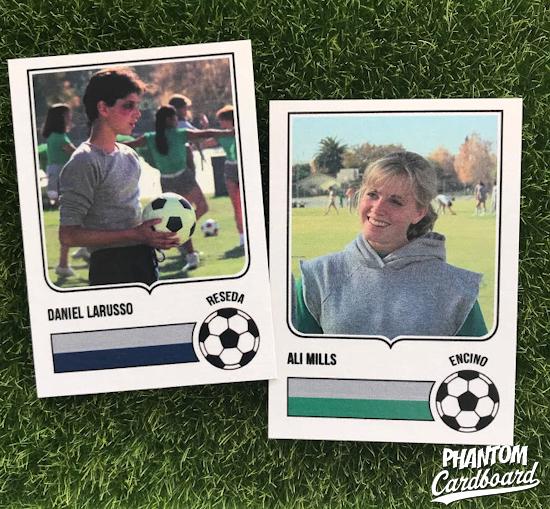 With the YouTube Red original series Cobra Kai being released today I put together these two cards. For all the the times I’ve thrown the word “favorite” around The Karate Kid is the movie that stands alone as my #1 all-time favorite movie.

I got to see the first two episodes of Cobra Kai in the theater on April 25th as a part of a special screening that was followed by the original 1984 masterpiece. That in and of itself was a treat for me having never seen it on the big screen. As for the Cobra Kai episodes... they were better than I even imagined they could be. From a production standpoint, a story standpoint and nostalgic tie-ins, the first two episodes had everything a Karate Kid fan could ask for. I’ve subscribed to YouTube Red and am counting down the moments until I can veg out to the series.

I’ve made a number of different Karate Kid themed cards. I’m always trying to think up new Karate Kid card ideas. These two are my latest offerings; Daniel and Ali soccer cards. Soccer is what first brought these two star crossed kids together so why not soccer cards?

I know nothing about soccer cards. I want to say the only soccer cards I ever owned came in a Classic blister pack that highlighted athletes from different sports that competed in the 1992 Barcelona Olympics. So, I had to do some research. I wanted to keep it 1984 so I searched for different soccer cards that came out that year. The design I liked best was from the 1984 Figurina Calciatori Forza Goal Series. I liked the shape of the image box and the overall clean design. In looking at different cards from the set I noticed the the soccer ball streak matched the player’s soccer jerseys. For that reason Daniel got the grey and blue to match his gym sweats, and grey and green for the same reason for Ali. In the text above the ball where the player’s team/country was displayed I added Encino and Reseda for Ali and Daniel respectively. I used that to play on the division of class that is a central theme of the movie.

Posted by phantomcardboard at 7:03 PM