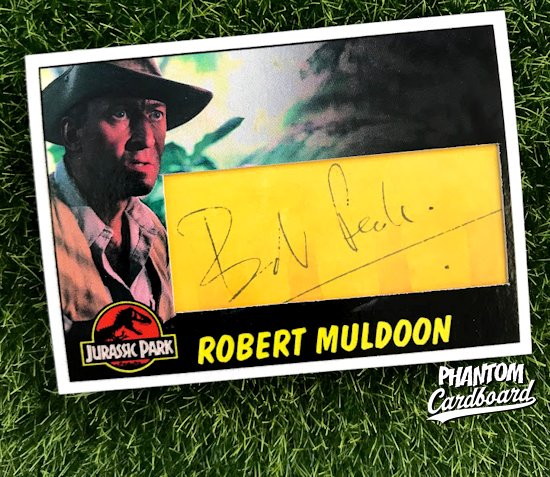 Despite a number of requests for cut card design I've, until now, shied away from making them.

A cut card is a trading card that has a window cut out of it to incorporate an autograph that has been trimmed out of another previously signed item.  it can be a stylish way to present an autograph was was obtained on a magazine page or a note card.  It's also a way to have an autographed trading card from a deceased celebrity.  The cut card I was commissioned to do, I suspect, was a combination of both of those two scenarios.

Matthew, the gentleman who commissioned this card, is a big fan of Jurassic Park and he was looking to have a cut card made from an autograph he had of Bob Peck who played Robert Muldoon in the blockbuster movie.  Matthew collects autographs on trading cards through the mail like myself.  Unfortunately the world lost Peck to cancer in 1999.

I had made a few custom Jaws cards for Matthew in the past and he was successful in getting some great looking signature on the 1975 Topps baseball inspired designed I did those ones in.  He wanted this card to be vintage inspired as well.  I immediately thought of Topps' 1988 Dinosaurs Attack set for the obvious dinosaur connection. 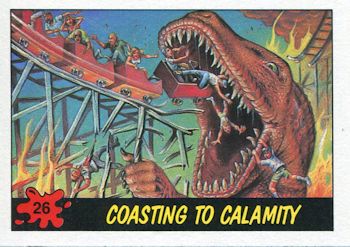 The challenge with this card was the exact reason I've declined the offer to do make any up until giving this one a try... the autograph window cut out.  Like all of my cards, I wanted this one to have as professional of  a look as I could accomplish.  I decided I could make this card happen by cutting the window with an X-acto knife and a straight edge ruler.  I anticipated a couple of tries but I was well north of a dozen before I had a rectangle that was clean and straight in my eyes.

There was a little bit of anxiety about bonding the front and back of the card with the cut autograph in the middle because it's pretty much a one time shot and I didn't want to ruin this guy's autograph as it obviously was one of significance to have sought me out and entrusting me with it to make this card for him.  I treated it with the utmost care and I think it turned out pretty good.  I delighted in the fact that when turned to the side there was no visible seam where the card was bonded.

Based on this experience I'm going to attempt one for my personal collection.  I've acquired an autographed picture for the signature and I have a card I've made in the past that I'll add the window to.  This time however I'm sure there has to be a tool out there that can make my life a bit easier when it comes to the cut.  Maybe something that is used in cutting out matting for framed pictures.  It's something I'm still researching but I'll be sure to do a little write up when the card is done.
Posted by phantomcardboard at 5:32 PM