Nothing Burps Better Than Bacon 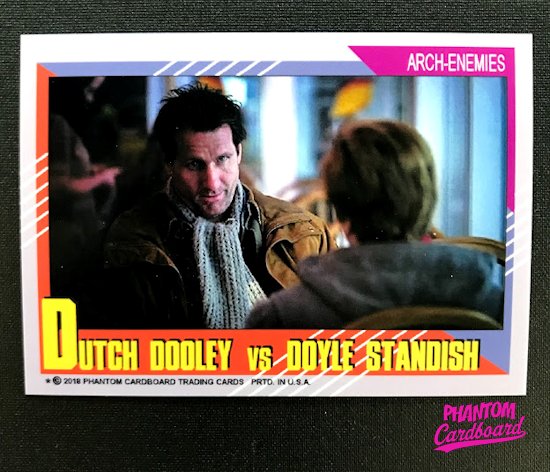 On Thanksgiving I have a little tradition of watching both Planes, Trains, and Automobiles and Dutch.  If I don’t we just had a really big dinner.  Thanksgiving must not have happened.  This custom card is a homage to that latter of the two movies, Dutch.

Dutch was released in 1991 and like most movies around this time I most likely first saw it on HBO.  I loved it the first time I saw it and every time since.  For me it’s a perfect holiday movie.

Because of Married… With Children I was a big Ed O’Neill fan.  The Dutch Dooley character, to me, is only a slightly more refined version of Al Bundy.  As the years have gone by I’ve found myself relating somewhere in between the two characters being somewhat of a working stiff from midwest that has had a number of bumps in the road, both self-inflicted and not.

Since Dutch was released in 1991 I thought it would be funny to drop Dutch and Dobsy Dale Doyle into a 1991 Impel Marvel Universe Series II ‘Arch-Enemies’ subset inspired design.

Posted by phantomcardboard at 5:03 PM